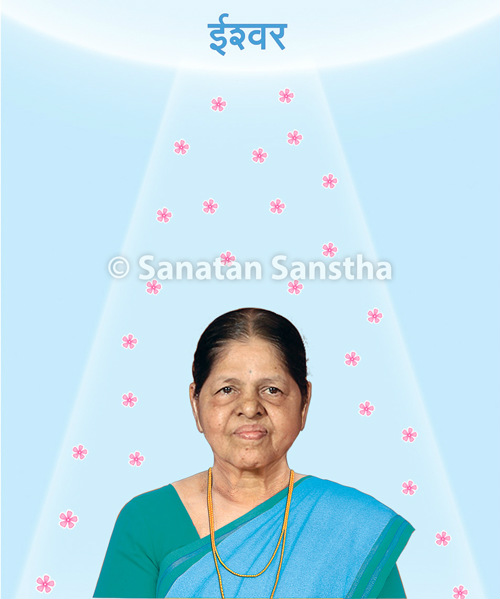 B. Grandmother never treated my mother as a ‘daughter-in-law’. She always loved her liked a daughter, in fact even more than that. Despite none of our relatives being seekers they feel that she is an ideal mother and mother-in-law.

C. There has never been a fight in our family between my parents and grandmother, something which our neighbours and friends always appreciate.

D. Grandmother has been behaving ideally not only at the spiritual level but also at the worldly level because of which she is appreciated by both relatives and people in society.

E. Due to her polite talk and loving nature grandmother is the favourite of all. All relatives love her. In fact even her in-laws’ family loves her.

Ever since grandmother has understood spiritual practice as per Path of Guru’s grace (Gurukrupayoga), since the past 15 years she wakes up at dawn performs mental worship (manaspuja), chanting, reads the Dainik Sanatan Prabhat, writes her daily chart, in other words makes all efforts from individual (vyashti) spiritual practice consistently. No matter how late she goes to bed she does not refrain from writing the daily chart and does not allow this to disrupt her next day’s planning. She has not interrupted this process even once. She did it even when she was ill, she never takes concessions in this regard. If on a particular day she is unable to make efforts then she feels great remorse for it.

3. Accepting the situation in a positive state

3 A. Performing worldly duties happily in a positive frame of mind

Grandmother was born and spent her childhood in a large family, but after marriage due to some problems she had to live in a relative’s house in 1 or 2 rooms but she never complained about this to grandfather. She performed worldly duties happily and in a positive frame of mind. She performs spiritual practice continuously accepting everything.

3 B. Accepting her beloved granddaughter’s moving
to the ashram to perform full time spiritual practice easily

4. Yearning to render seva (service unto the Absolute Truth)

Formerly grandmother would render sevas such as setting up a stall, distributing Dainik Sanatan Prabhat etc. but now she is unable to do this. Hence she tells my parents and me to do seva, both at home and outside. As she was sick for a few days we would not leave the house for seva so she would constantly pray asking for a cure so that we could go out for seva and would also tell us to give first priority to seva and not her.

Unlike us who watch television for recreation she tries to learn a spiritual perspective from television programmes.

She is perpetually reading something. She has this habit even before she commenced spiritual practice. She has read several Holy texts and books hence is well-versed in many subjects yet she has no ego about it instead says she does not know or understand anything.

7. Yearning to change herself

In the intermediate period due to some sad events grandmother’s mental status was disturbed because of which for 2 years her spiritual level remained stagnant at 69%. She was struggling to get out of that state and would constantly telephone H.H. Kaleaji and H.H. Dateaji to ask how to make efforts to get out of this situation. Despite the spiritual practice of my parents and me being less than hers she always asks us to point out her mistakes and struggles to get out of that state. When I told that her photograph would appear in the ‘Pictorial life journey of Paratpar Guru (Dr.) Athavale’ she was in tears and asked what more efforts she needed to make.

Grandmother is an excellent cook. Now due to old age she is unable to stand for long hours but is always doing something. When she feeds you something not only does she fill your stomach but also satiates your mind. That food item is like offering to God (naivedya) as she saturates it with her spiritual emotion.

In childhood I was in awe of the fact that there were no fights at home because I would hear fights in the neighbourhood. Once when I asked grandmother why there were no fights in our home she emphatically told me that this is because we are all seekers practicing Spirituality and Gurudev is in our lives making the atmosphere is our homes different from other homes. This incident made me aware of her virtues of faith in Paratpar Guru (Dr.) Athavale and in spiritual practice and her firm perspectives in spiritual practice. She is completely detached from the Great Illusion (Maya) and is disinterested in enjoyment, eating, travelling and says that every moment of her life is for Paratpar Guru (Dr.) Athavale.

A. Every morning she performs mental ritualistic worship (manaspuja) of Paratpar Guru (Dr.) Athavale. She thinks of him all day. Whenever she speaks about Him often spiritual emotion is evoked in her depicting her spiritual emotion of gratitude.

B. Before she became a Saint some unhappy events occurred in the family. She would tell us then that Paratpar Guru (Dr.) Athavale is watching and that He alone would show the way.

C. Grandmother is waiting for Paratpar Guru (Dr.) Athavale like Shabri. She feels that He will come home in physical form hence we should make our home like an ashram.

D. Grandmother feels elated when seekers visit us and learns new things from them. She feels that they are forms of Paratpar Guru (Dr.) Athavale visiting her.

E. Grandmother says, “Our home may not be in keeping with the science of premises (vastushastra) but Paratpar Gurudev resides here hence our home is favourable for spiritual practice.Due to her immense devotion unto Paratpar Gurudev he always resides in our home in a subtle form.”

A. Her skin has become extremely soft and smooth.

B.Despite being 75 years old her hair is jet black.

C. Her face is lit up and there is a unique radiance on it.

D. Her voice is more melodious than before.

E. She performs ritualistic worship daily. A change has occurred in the photograph of Dattaguru in the temple at home, it has become white and the four dogs and cow in it appear alive, in other words that photograph is now in the non-materialised (nirgun) state.

F. Visiting seekers do not feel like leaving grandmother.

12. Changes in the home due to grandmother

Whether seekers or average individuals when they enter the home they feel calm and thoughts in their mind decrease. Spiritual experiences which occur are experiencing fragrance, light, spontaneous chanting etc. I feel that all these changes have occurred due to spiritual practice of grandmother.

‘One needs merits of several births to get this kind of grandmother and with Your grace Paratpar Guru (Dr.) Athavale, I have been blessed with it. No matter how much I write about grandmother it will still remain incomplete. Grandmother is different, God blessed me with Her Holy company (satsang) thus making me aware that to come in contact with a person like her God must have got spiritual practice done from me in past births.

I have a grandmother with such unique virtues only with Your grace for which I am grateful a million times at Your Holy feet. May I be able to make efforts so that I imbibe her virtues, bless me for that and get efforts as per your expectation done from me is my prayer with surrender at Your Holy feet.’

seva
Service unto the Absolute Truth, that is, God Principle
Satsang
Company of the God Principle
Naivedya
Food offered to the Deity as a part of ritualistic worship
Gurukrupayoga
Path of Guru's grace, which incorporates eight steps
Ashram
A place where a seeker can remain engrossed in spiritual practice through spiritual discipline