Ella is a small city 51 kms away from ‘Nuwara Eliya’, situated in mountainous region of the Central Province of Sri Lanka. It is also called ‘Ravana Ella’. There are few places in this city which are said to be related to history of Ravana.

There is an imprint of big demonic face on the stone which is at the entrance of ‘Ravana Cave’ and such scary demonic faces are found on many stones inside this cave.

2. Ravana setting up different cities using his illusive
powers and roads made thro’ tunnels in hills for going to those cities

Ravana had many supernatural powers. He had illusive power since he was a demon and with that power, he ruled people of Sri Lanka. He had created different cities for people with his illusive powers and tunnels were dug out to go to those cities. These tunnels were very wide that 4 bullock carts could go at a time through the tunnels. Once you enter the tunnel, there are many diversions to go to various places. The tunnels were used as hiding places also during enemy attacks.

3. A. Entry beyond 200 mtrs is prohibited and
big face of a demon imprinted on stone at entrance of the cave 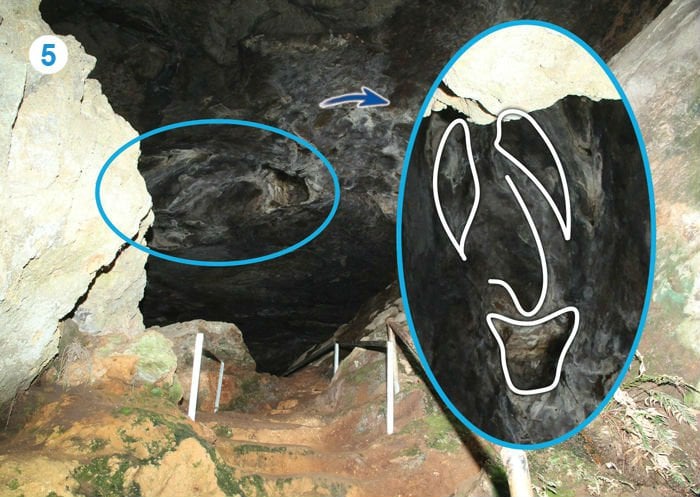 We are allowed to go only till 200 meters inside the cave built by Ravana but one cannot go further as a big stone has been kept there by the Government prohibiting people from going inside. We were told by the local people that there were bats, wild animals and poisonous snakes in the cave. At the entrance of the Cave, a demonic face has been imprinted on a stone and there are many scary faces imprinted on stones inside the cave with eyes seemed to be looking at us. (See Pics. 4 and 5)

3. B. Observations made after entering the Cave

2. Many local people also are afraid of going there. We, however, got a good guide with the grace of Shriram; therefore, we could go inside the cave. He said, “Nobody stops here even for ten minutes. Some people even go back from the entrance.”

3. Ravana ruled this part during ‘Treta-Yuga’ that is millions of years ago. Even then, everything created by Ravana gives out same vibrations. We strongly felt presence of protective shield created by Gurudev around us, on entering the Cave and we realized that Guru has been always protecting us. We felt immense gratitude towards Paratpar Guru Dr. Athavale.”