1. More doshas (toxins)
are generated in the Sharad season

‘After the monsoon season when the the strong rays of the sun fall on the earth Sharad season commences. In the rainy season the body blends itself with the cool atmosphere. When the Sharad season starts as heat grows naturally pitta (bile) increases giving rise to a series of illnesses such as conjunctivitis, boils, piles, fever etc.There is a maximum chance of occurrence of illnesses in the Sharad season because of which it is humourously referred to as the month which gives more patients to vaidyas.

2. Diet according to the season

2A. Do and don’ts about diet in the Sharad season

2B. Some important points on diet

2B 1. Eat only when you are hungry

In the rainy season the digestive capacity is poor. In the Sharad season it gradually starts increasing. Hence eat only when hungry. If you always eat when not hungry then digestion gets disrupted and pitta problems start.

2B 2. Masticate each mouthful thirty-two times

Many will feel that eating thus will take long time and waste time but if you eat in this manner then you feel content by eating even little and digestion too will occur well. Chewing every mothful thirty-two times will mix it well with saliva. You will never complain of pitta (hyperacidity) as the properties of saliva are exactly opposite to those of pitta. When a lot of saliva enters the stomach the excessive pitta there is regulated.

In one of his discourses Swami Ramsukhdasji Maharaj has guided beautifully on how to ensure that you have chewed each bite thirty-two tmes. Chant every word from the chant ‘Hare Rama Hare Rama Rama Rama Hare Hare Hare Krushna Hare Krushna Krushna Krushna Hare Hare twice. Say every word with the same speed. This chant has sixteen words so if two rounds of the chant is done for each bite then it occure thirty-two times and God too is remembered.

After the rainy seasion according to Ayurveda the Agasti star rises in the sky purifying water from unpolluted, natural water bodies from toxins. Water is heated all day with rays of the sun and cooled at night with rays of the moon is called hansa water and is equivalent to Divine nectar. Whoever can should drink such unpolluted water from natural sources such as a well, spring etc throughout this season.

2C 2. Cold water from a cooler is harmful for health

‘Water stored in a mud pot regulates pitta. Mud also gives the physical body essential minerals. Hence water stored in a water pot both in this season and otherwise is beneficial. Cold water from the refrigerator or cooler is deleterious to health. Water with tulsi (Holy basil) seeds or vala (vetiveria) soaked in it, amla (gooseberry) syrup in water etc can be used as substitutes to get benefit in this season.’

3. Other habits to be followed in Sharad season 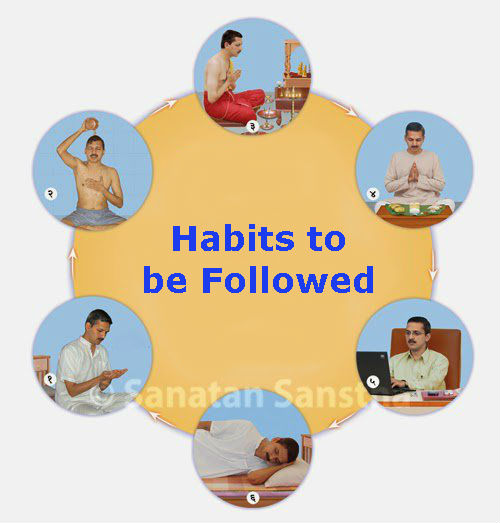 3A. Always massage your body with oil before a bath

Massing the skin with coconut oil before a bath prevents boils on the skin. Excessive sweating due to heat is also a problem for which application of coconut oil to the skin helps.

3B. Keep fragrant flowers with you

Fragrant flowers help in eliminating pitta. So for those whom it is possible keep flowers such as parijat (night-flowering jasmine), chafa (frangipani), sontakka (butterfly ginger lily) etc with you.

Clothes should be cotton, loose and light coloured.

Remaining awake till late at night increases pitta hence in this season it should be avoided. Instead wake up early in the morning. In this season if you sleep in the verandah or courtyard of the house in the open, in the moonlight, then you get sound sleep and lethargy too vanishes. Sleeping during the day is prohibited in this season.

4A. Shodhan or panchakarma

Shodhan or Panchakarma is the process by which in certain seasons the doshas (toxins) which have increased in the body are expelled from it.

In this season first take a purgative (to clear the bowels) to help in keeping the body supple. A teaspoon of castor oil or a teaspoon of Gandharva Haritaki Churna (available in an Ayurvedic store) mixed with warm water should be taken for eight consecutive nights befiore going to bed.

In Ayurveda removing blood from the body is called Raktamokshan. For maintaining purity of blood in every Sharad season blood letting should be done once. This prevents illnesses such as pimples on the face, bleeding from the nose, conjunctivitis, boils, etc. Hence in the first fortnight of the season you should donate blood under the supervision of a blood bank doctor.

4A 2A. A different perspective of blood donation

In Allopathy when blood is being donated the blood has to be grouped and cross matched. Also the donor’s blood should be free of disease germs. But the levels of vata (wind), pitta (bile) and kapha (phlegm) in the blood of both is not compared. Donating blood after comparing them is indeed a topic for research because if a patient is already having a high level of pitta in his blood and receives blood which also has a high pitta content then then is a chance of it growing further in his blood thus worsening his disease.Though Allopathy has never discussed this as a researcher of Ayurveda I am putting forth this view,

To combat all diseases arising fromtoxicity during these days home remedies such as sandalwood, vala, adulsa (vasaka), gulvel (tinospora cordifolia), kirait (canscora), neem, coconut oil and ghee help tremendously and should be used as follows –

1. Levigate a sandalwood stick on a stone rolling board (san), twice in the morning and evening, add a teaspoon of that paste to a bowl of water and drink it or apply to the skin for 4 to 7 days.

2. Soak the roots of vala in water and drink that water.

3. Prepare a concoction with adulsa, gulvel or kirait and drink a cup thrice a day for 4 to 7 days.

4. On an empty stomach consume a bowl of neem leave juice for 4 to 7 days.

5. Apply coconut oil or ghee to cubed sugar and lick it.

Note : Medicines prescribed for 4 to 7 days should not exceed 7 days

In this season ensure that you avoid roaming in the sun, getting wet with water or dew, sit or sleep under the fan continuously, losing your temper, getting irritable as these acts disturb the balance of doshas in the body and lead to disease.

My earnest paryer unto Deity Dhanwantari is ‘May seekers observe these norms in Sharad season and remain healthy and may their faith in Ayurveda grow’.