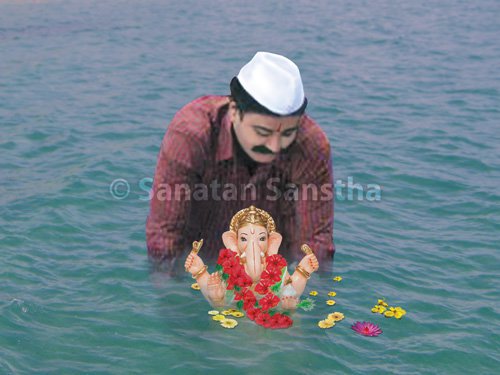 O devotees of Ganesh, you have adhered to the Scriptures with devotion wholeheartedly while serving Shri Ganesh during the Ganesh Chaturthi festival and now instead of immersing Ganesh Idol, are you going to hand it over to the atheists who are seeking cheap publicity under the pretext of protecting the environment? Do not invite grave sin by falling prey to the appeal of traitors to Hindu Dharma. If the Ganesh Idol is made from clay, as per the Scriptures, it will protect the environment as well as you will benefit from the grace of Shri Ganesh because of abiding to the Dharma.

Why should the Idol of Ganesh and nirmalya be immersed in flowing water ?

According to the science of Spirituality, Chaitanya (Divine Consciousness) gets attracted to the Idol of Shri Ganapati in large quantities as a result of meticulously performing ritualistic worship of the Idol during the festival of Ganesh Chaturthi. By immersing the Idol in flowing water, this Chaitanya reaches far and wide with the flowing water and many people benefit from them. This water evaporates, too; hence, it makes the atmosphere sattvik and spreads through it. As Chaitanya is present in the nirmalya as well, that too should be immersed in flowing water to spread it far and wide.

Alternative to immersion of Idols in drought affected areas

In many places due to the lack of rainfall, rivers and small streams dry up. Hence there may be a difficulty in immersing a Ganesh Idol in flowing water. In adverse times if religious actions are performed following Principles of Spirituality, then it is still in keeping with Scriptures. Hence in drought affected areas use the following alternatives to immersion of Ganesh Idols.

A. Even though it is customary to worship a big sized Idol, during drought situation, one should worship a small Idol (6 to 7 inches tall) which will facilitate the process of immersion.

B. After performing Uttarpuja (Ritualistic worship before immersion) immerse the Idol in a vessel containing water, near the tulsi (Holy basil) plant outside the home or in the courtyard. If living in a flat in a city, do the same in a vessel at home itself.

C. After all the clay has disintegrated in the water completely, offer that water to sattvik trees such as Apta (Mountain Ebony), Vad (Banyan), Pimpal (Bo) etc., ensuring that it is does not get trampled upon.

If the option of installing a large Idol for worship is chosen, then after Uttarpuja is performed one should keep the Idol in a sattvik place in the home itself (e.g. near the temple at home). There is no need to perform its ritualistic worship. To prevent dust from accumulating it may be preserved in a box. Later when adequate quantity of flowing water is available, immersion can be done in that water. The immersion process described above is only meant for drought condition as as per code of conduct prescribed by Dharma in adverse times.

Why immersion of Ganesh Idol should not be done in an artificial tank ?

Under the pretext of prevention of environmental pollution during immersion of Ganesh Idols, some Municipal Corporations create artificial water tanks at various places. Immersing Ganesh Idols in such tanks is inappropriate for following reasons –

1. Scriptures have recommended immersing a consecrated Idol in flowing water. This helps in spreading the Divine Consciousness from the Idol through the water, far and wide. As water in a tank is stagnant, devotees are deprived of this spiritual benefit.

2. After immersion in such a tank the corporation workers remove the Idols from the tank, even before its complete disintegration, and dump them outside the tank. This goes against the Scriptures.

3. Idols immersed in the tank are transported in garbage trucks of the Corporation and workers hurl the Idols akin to garbage. Often these Idols are immersed in dirty water accumulated in quarries.

4. Once the immersion process is complete, the Corporation releases the water charged with the Ganesh Principle from the Idols into the drainage before destructing the artificial tank. This amounts to denigration of Shri Ganesh.

Nirmalya from the ritualistic worship too should be immersed in flowing water. As flowers and foliage are organic substances there is absolutely no question of their causing water pollution.

Today ‘eco-friendly’ Ganesh Idols are made from paper mache. This is not only against Scriptures but also dangerous to the environment because paper mache absorbs oxygen from water resulting in production of methane, a poisonous gas. Sculpting Idols from clay as prescribed by the Scriptures is truly environment friendly.

1. In Scriptures, it is prescribed that Shri Ganesh idols of mud clay should be installed. These clay idols are expensive.

Compared to the various expenditures made during Ganesh Chaturthi in every family (e.g. modern decoration, clothes for the family etc.), the money spent on the Idol is negligible. Main objective of worshipping Shri Ganesh Idol is that the family derives the Ganesh Principle from it. This benefit cannot be derived from an Idol made from plaster of paris. If you are buying an Idol made from plaster of paris Idol simply because it is cheaper, then buy a smaller clay Idol but do not perform action against Dharma by buying a plaster of paris Idol.

2. In some homes every year Ganesh Idols in a different unscientific form is installed just to please the children. The parents are confused thinking that shouldn’t they be fulfilling the wishes of their children.

An Idol is not a toy to get variety in it every year. A Ganesh Idol is worshipped at home to increase spiritual emotion and devotion, to absorb Divine Consciousness etc. One should never compromise with the principles laid down by the Scriptures. On the contrary, leverage this opportunity to impart education on Dharma to the children.

O devotees of Ganesh, educate your relatives, mandals (clubs) celebrating Ganesh Chaturthi etc, to install idol of Shri Ganesh as per Scriptures as by doing so you will benefit from the grace of Shri Ganesh.