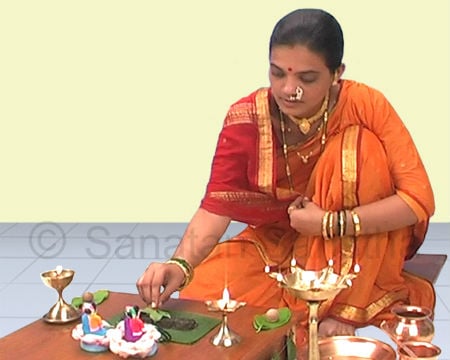 Bharat has a number of Holy and Religious festivals and traditions. However, most people view and celebrate them merely as age-old practices; they do not pay attention to the underlying science and their deeper meaning. If the underlying science of the Holy and Religious festivals is known, they can be celebrated with added faith. This article explains the significance of vrats, their creation and the holy texts associated with the vrats.

A. The word vrat has been derived from the root ‘vru’ which could mean to choose, a resolve, a desire, obedience, worship, a vow etc.

B. A specific religious observance for a specific period or lifetime is a ‘vrat’.

C. Worship of a particular Deity on a particular tithī (A lunar day), day of the week, month or during other auspicious periods and observing restrictions in eating habits and conduct, in order to fulfill a specific motive, are all referred to as vrat.

D. Often the words vrat and vaikalya are used together as ‘vrat-vaikalya’. Vaikalya refers to a lean and light yet supple body or the techniques adopted to make the body so. Since most of the vrats include fasts, they facilitate in making the body supple.

A. Before creating man, God prepared a code of conduct for him. These are what we call the ‘Apourushēya (Divine) Vēdās’. Following Dharma as per varṇa (class) and as prescribed by the Vēdās not only prevents sorrow from birth till death, but in fact bestows happiness. Even happiness is the untruth; yet one expects to get it. However, the planning of Dharma is such that ‘while continuing to acquire this false happiness, one gradually develops detachment towards that happiness and becomes a rightful contender of Moksha (Final Liberation).’ God’s aim in creating Dharma Samhita (Code of Righteous conduct) was that ‘man should finally attain Moksha, even while enjoying worldly happiness’; hence, the third chapter of the Shrīmad bhagvadgītā is called ‘Karmayog’ (Path of Action). Practising Dharma without any expectations is itself Karmayog. Dharma does not expect us to practice sakām bhaktī (Devotion with expectation). Subsequently, over time the basic concept of Dharma in human beings saw a decline, resulting in shortcomings in man’s righteous conduct day by day and marked the coming into existence of the vrat.

B. The beginning of religious conduct or worship

The wishes of the people with authority or in power have to be accepted as the rule by others. The faithful believe that ‘God has laid down specific guidelines for us and all living beings’. Such guidelines or duties, when followed over a prolonged time, acquire the nature of customs or traditional practices. When people develop faith that, ‘These acts specified by God have to be compulsorily performed’, these acts acquire the status of religious conduct or worship. When an individual puts restrictions on his own conduct and activities like eating, the rules take on the nature of a sacred vow or a religious duty. Due to this, the word ‘vrat’ is a synonym for orders, following of orders, religious duty, worship of Deities, ethical behaviour, ritualistic vows, activity undertaken etc.

3. The number of vrats

Some so-called vrats of the middle ages existed even before Christ and for some centuries thereafter. At the beginning of the Christian era, the number of vrats was insignificant. However, with time, the number rapidly increased. The 11th century Holy text Rājamartanda written by King Bhoj identifies only 24 vrats. In the Holy text Krutyakalpataru written in the 12th century one comes across about 175 vrats. The Holy text Kālvivēk written by Shulpani, after a long passage of time, describes only 11 vrats. Hemadri’s text describes 700 vrats. MM Gopinath Kaviraj enlists 1622 vrats in his Vratkosh published in 1929. If some of the vrats that merely add on to the number are excluded, then the number will be far less than 1000. Yet today it is not possible to quote the exact number of vrats.

The Dānparva (section pertaining to donation) of the epic Mahābhārat has advocated various vrats. A Holy text like the Nirṇaysindhu has described various vrats for atonement of sins. Vratraj, Vratark, Vratkoustubh, Hemadrivrat etc. are some texts which give detailed information on vrats.