Saints have predicted that during the coming World War lll, lakhs of people will die due to nuclear radiation. In future, natural calamities will also increase. During adversity, the communication channels break down. It becomes difficult to take patients to a hospital, contact some doctor or buy medicines. Sanatan Sanstha has prepared a Holy text series that will help in facing these adverse times. The methods of treatment learnt from this series will be helpful not only during emergencies but at other times too; for, they will make everyone self-sufficient and confident. As of now, there are 13 Holy texts in this series. ‘Spiritual healing remedy of using empty boxes for curing ailments (2 Volumes)’ is one amongst these and we are introducing it in two parts. Information in detail is provided in these Holy texts.

‘Spiritual healing remedy of using empty boxes for curing ailments’ is a Holy text which will be useful not only during the adverse times but during normal times too.

A simple cardboard box may seem an unlikely tool for spiritual healing remedy; however, the hollowness or the void of a box is directly related to the Akashtattva (Absolute Ether Principle). Out of all the Panchatattvas (Absolute Cosmic Principles), Akashtattva is the most subtle and also the most powerful. During spiritual healing, when one is exposed to Akashtattva, the healing is enhanced.

In the part – 1 article we have covered 1. General information about empty boxes such as their shape, dimensions,size, colour and 2. Seats in the body where spiritual remedies is to be performed. In this issue we will continue with Point 2A.

2A. Seats in the body where spiritual
remedies using empty boxes are to be performed
and Kundalini-chakras associated with the ailments Note 1 – Nyas at the Muladhar-chakra is not advised since it is difficult to perform.

While performing box-remedies, wherever spiritual remedies have been recommended on the Kundalini-chakras, ailing organs or nine openings* in the body, give preference to spiritual remedies on the Kundalini-chakras (This aspect has been discussed in detail in Point ‘8’ of the Holy text). (*Two eyes, two ears, two nostrils, mouth, urinary tract and anus are the nine opening in the body.)

3A. Performing spiritual healing through large boxes
on Kundalini-chakras, ailing organs or nine openings in the body

3A 1. Some guidelines pertaining to spiritual remedies

A. Place the box about 30 cms. (1 foot) away from the individual. A variation of 10 cms. is permitted. While performing spiritual remedies sitting in one place, the boxes should be placed vertically as shown in adjacent figure. 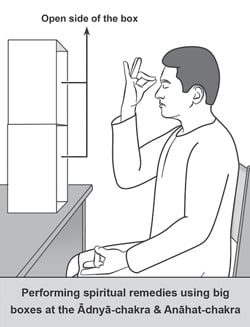 B. Place boxes at the level of the spots where spiritual remedies are to be performed. When the boxes are placed towards the Kundalini-chakras or the ailing organs, the negative energy from them is effectively pulled into the boxes, facilitating rapid cure of the ailment in the individual. The height for placing the boxes should be decided on whether the individual will sit on a chair or on the floor for spiritual remedies; for example, if an individual who has a headache sits on a chair during spiritual remedies, place one box at the level of his Anahat-chakra (Centre of the chest), the second at the level of his Adnya-chakra (Mid-brow region), one over the other on a table. (While performing box-remedies it is beneficial to perform mudra or nyas. Hence, in this image the individual is shown making a mudra with one hand and performing nyas with the other.)

If it is not possible to place the boxes for spiritual remedies at the level of the identified spots, they should be placed at a lesser height or on the ground. Since the benefit obtained by placing the boxes at other levels is only 10 to 20% of that when placed at the level same as the spiritual remedies spots, try to place them at the required level.

If placing the boxes at the required level is not possible, place them at an angle in a manner that the void of the boxes faces the individual. We can use a wooden block to incline the box as required. 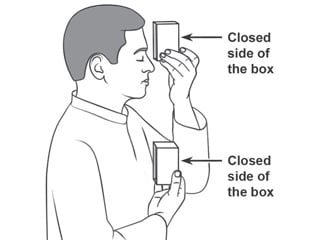 3B. Holding the boxes one or two cms. away from the body, perform remedies on the Kundalini-chakras, ailing organs or nine openings in the body

It is not practical to perform remedies with large boxes during travel, in the office, during a meeting etc. At such times, spiritual healing can be performed through small boxes. (As shown in the adjacent figure spiritual healing is being performed holding boxes at the Adnya-chakra and the Anahat-chakra.)

3B 1. Dimensions of the box

It should be convenient enough to hold the box. Length, breadth and depth should be in the ratio of 10:7:6.

3B 2. Some guidelines pertaining to spiritual remedies

A. Hold the open side of the box on the spot where spiritual remedies are to be performed in a manner that its centre is exactly over the spot to be treated.

B. If the hand pains while holding the box, switch the hands.

C. The hands may pain if they remain hanging during the spiritual remedies. To avoid this, the individual in the chair should rest his arms on the arms of the chair. If weak or elderly individuals find it difficult to hold the boxes 1 or 2 cms. away from the affected spot, they should hold them in contact with the spot for spiritual remedies.

3C. Box-remedies can be performed easily during the day-to-day activities, studies, seva etc.

Box-remedies by placing boxes about 30 cms. (1 foot) away from the body and holding the boxes can be performed easily every day. Some examples are mentioned ahead.

You can place a box under your chair with the open side towards the ground. This will help in providing protection from the distressing energy coming from Patal. You can place two boxes between your thighs one over the other facing you. This will help in overcoming problems associated with the Swadhishthan-chakra (1 to 2 cms. above the genitals) and Manipur-chakra (at the navel) or abdomen and pelvic region.

2. When conversing with someone or when in a meeting, you can hold a small box on the spot for spiritual healing.

3. Box-remedies can also be performed easily through the methods such as hanging a box over your seat or as mentioned in Point ‘3H’ (In part 3), using a headgear of boxes throughout day or fixing them to the spot where spiritual healing is to be performed. ?