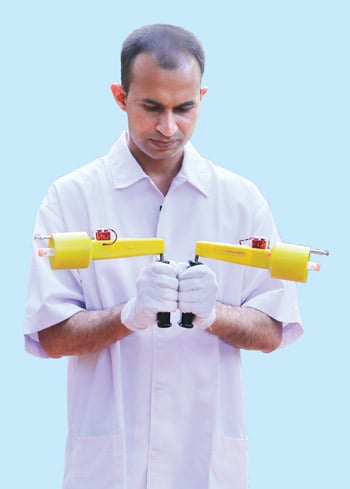 Music is God’s invaluable gift to mankind. Music enables man to not just get relief from stress, but to also experience communion with the Almighty God. This was understood through the examples of various Saints such as Sant Surdas, Sant Haridas (The Guru of Tansen), Sant Meerabai etc. However, in today’s times, many renowned reformists across the world have consistently expressed the concern that instead of making music a medium to attain happiness and peace, it is being made a medium of distress and decline. Through various music-based experiments, scientists have reached a conclusion that Indian music is very effective and helpful in treating ailments.

On 7.1.2017, UTS (Universal Thermo Scanner), an instrument helpful in studying the auras of objects and individuals, was used for a scientific study of the spiritual effect on an individual of music which is distressing according to scientists, western music that has the most soothing effect according to scientists, song of a famous Indian classical singer and a bhajan sung by a Saint at a very high spiritual level. Given ahead is the nature of experiments, observations made during the experiment and their analysis.
This research paper was presented by Dr. Jyoti Kale of Maharshi Adhyatma Vishwavidyalay at ‘Astra 2017’, an international conference held at Pune, Maharashtra on 18.1.2017 on the subject of ‘Vedic science’.

In this experiment, a seeker was made to hear ‘Heavy metal’ music (which is distressing according to scientists), western music (that has the most soothing effect according to scientists), song of a famous Indian classical singer and a Bhajan sung by H.H. Bhaktaraj Maharaj for 5 minutes each. Readings of the seeker were taken using UTS before and after he had heard each type of music. To eliminate the positive or negative effect of one sample (of music) on the subsequent sample, a gap of approximately 20 minutes was given between two readings. A comparative study of all the readings was done.

3. Information on components used in the experiment

3A. Seeker participating in the experiment : This seeker has been performing spiritual practice for over 10 years.

3B. Four different types of music the seeker was made to hear and their uniqueness

3B 1. ‘Heavy metal’ : In this category, music by the group ‘Anthrax’ was selected. This type of music, popular in the western world, is strong, aggressive and loud. In an experiment conducted in 1997 and acclaimed widely across the world, Mr. David Marel observed that the learning ability of the 24 mice that were made to hear this music for a week, reduced drastically; besides, they became so aggressive that they bit each other to death. (Ref. : https: //www.facts-are-facts.com/article /music-and-psyche-crippling-rhythms-and-murderous-mice)

3B 2. The most soothing western music according to scientists : Scientists have said that the album ‘Weightless’ by ‘Marconi Union’ is the most soothing music to date. (Ref. : http://www.makeuseof.com/ tag/most-relaxingsongs-all-time-science/)

4A. The purpose of testing the spiritual uniqueness of the experiment samples using scientific equipment or technology : To understand the extent of positive vibrations in an object (object, premises, animal and individual), whether the object is sattvik or not and whether it is beneficial spiritually, it is necessary to have the ability to understand the subtle dimension. Saints have this ability and hence, can correctly identify the subtle vibrations in every object. Devotees and seekers have faith in every word of a Saint; they consider it to be final testimony. However, rationalists do not have faith in words, they ask for proof. Only when an aspect is proved through scientific analysis, meaning, proved using a equipment, they believe in it.

4B. About UTS : This instrument is also known as an ‘aura scanner’. By using this, the energy and the aura of an object can be measured. This was developed in 2003 by Dr. Mannem Murthy, a former nuclear scientist. He says that the UTS can be used for identifying obstacles in a premises and in medical science, animal husbandry, Vedic science etc.

4C. Various components of the scientific experiment with the instrument and interpretations

It is basically of two types :

4C 2. Positive energy : This is a helpful energy, and to measure it, a sample of +ve energy is placed in the scanner.

4C 3. Measuring the aura of an object using the UTS : To measure the aura of an object, a sample that has maximum vibrations of the object is taken; for example, when the aura around an individual is to be measured, the individual’s saliva or a photo; for an inanimate object, a picture; for a plant, its leaf; for an animal, its hair; for a premises, its mud or dust; in case of Deity’s Idol, sandalwood paste, shendur (An orange powder used in rituals) etc. applied to the Deity.

In this experiment, the saliva of an individual was used as a sample to measure his aura.

If the arms open at 1800, move away from the object and note the distance till which this angle remains steady. This distance is the extent of the object’s aura. If the arms of the scanner open at an angle less than 1800, it implies that there is no infrared aura around the object. Similarly, the aura of ultraviolet energy, positive energy and specific vibrations in the object are measured.

B. The individual handling the instrument wore white clothes so that the colour of clothes does not affect the experiment.

6A. Analysis of the negative energy related observations 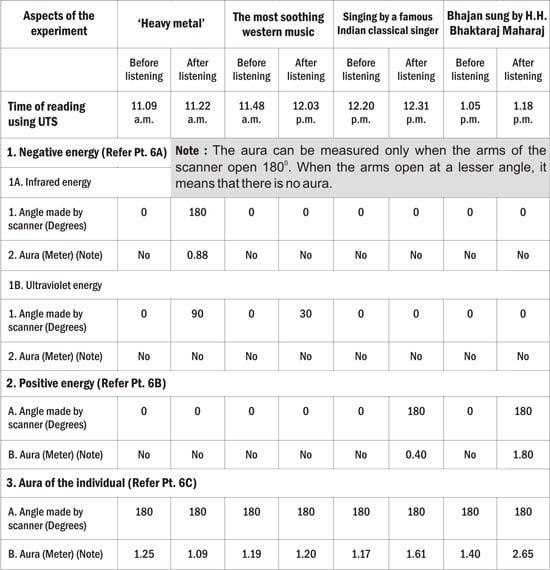 6B. Analysis of the positive energy related observations

6C. Analysis of the reading about the aura as in the table

6C 3. The aura of the seeker before listening to the famous Indian classical singer was 1.17 meters. After listening to his music, it increased to 1.61 meters. This is the effect of positive vibrations on the seeker caused due to the classical music.

From the analysis in Point 6, we understand the following :

A. ‘Heavy metal’, which is distress-causing as per scientists, is spiritually harmful as well.

B. Music that had the maximum soothing effect as per scientists, may not be spiritually harmful; however, it is not beneficial either.

D. Listening to bhajans of a Saint who is at a high spiritual level is spiritually beneficial most.

8. The music of a non-sattvik band is spiritually harmful

‘It is said that the body merely shakes to the beat of western music; whereas the Indian classical music has the strength to strike a chord with the inner self. Music is a way to God-realisation. The foundation of Indian classical music is spiritual; therefore it has the ability to generate sattvik vibrations. More the spiritual level of the singer, more the emission of sattvik vibrations from his singing. Such music is spiritually beneficial to the listeners as well.’

10. Reasons why the bhajans of H.H. Bhaktaraj Maharaj are spiritually beneficial

We do not know how great Saints such as Sant Surdas, Sant Tukaram, Sant Namdeo, Sant Kabir etc. sang bhajans; hence, we cannot benefit much from their bhajans. ‘Bhajans written, composed and sung by Saints who are at a high spiritual level are rare !’, say the knowledgeable in the field of Spirituality. From this perspective, the bhajans of H.H. Bhaktaraj Maharaj are an invaluable treasure for mankind. The striking features of some bhajans in published by Sanatan’s Holy text ‘Sant Bhaktaraj Virachit Bhajanamrut’ are given ahead. These reveal the factors essential for any music to be spiritually beneficial.

10A. Blessings of Shriguru : H.H. Bhaktaraj Maharaj has written and sung bhajans as His spiritual practice abiding by the orders of His Guru (A Saint). As a result, the words and the singing have the blessings of His Guru.

10B. High spiritual level of the singer : The voice of an individual at a high spiritual level is enriched with Chaitanya (Divine consciousness). Many have had the spiritual experience of feeling like listening repeatedly not only His bhajans but also His speech.

10C. Being egoless : H.H. Bhaktaraj Maharaj had this bhav – ‘It is by the grace of Shri Guru that I could write and sing bhajans’ – meaning, He had no ego about His writing as well as singing ability. Hence, His bhajans are enriched with Chaitanya.