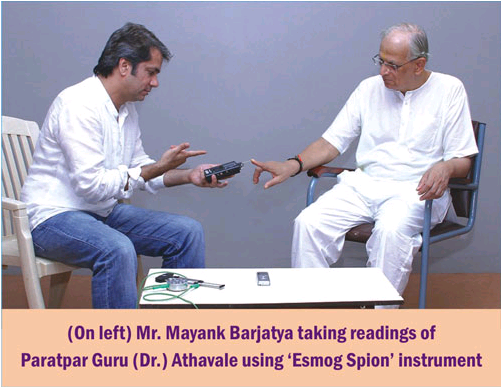 For some years now, there have been a lot of changes in the body of Paratpar Guru (Dr.) Athavale – (Inspiration for Sanatan Sanstha) such as His hair turning golden, skin turning yellow, nails turning yellowish and becoming transparent. All this is beyond the comprehension of the intellect.

An experiment was conducted on 13.6.2014 using the ‘Esmog Spion’ instrument to study these changes scientifically. The experiments were conducted by Mr. Mayank Barjatya, an architect from Pune, on behalf of Maharshi Adhyatma Vishwavidyalay.

The observations and the conclusions of these experiments are given in this article. Readers will understand from these observations that when compared with the body of an ordinary individual, that of a spiritually enlightened individual displays uncommon peculiarities, and the underlying reasons (at the spiritual level) are beyond the comprehension of the intellect.

Readers should understand that Spirituality is a science of infinity and most of the aspects in Spirituality are beyond the comprehension of the intellect and that the spiritual experience of these aspects can be had only after performing spiritual practice; and hence, if they are inspired to commence spiritual practice not just today, but this very moment, we can say that this write up has fulfilled its purpose.

Mr. Mayank Barjatya is an architect of international repute from Pune, Maharashtra. He has over 20-years experience in this field. He is the founder of ‘Vastu World’ and editor of the English Monthly ‘Vastu Times’.

Paratpar Guru (Dr.) Athavale, an internationally renowned Hypnotherapist, established Sanatan Sanstha on 22.3.1999. He propounded ‘Gurukrupayoga’ for faster God-realisation. By following ‘Gurukrupayoga’, 70 seekers have become Saints till 20.3.2017, and 1014 seekers are progressing in this direction. Drawing inspiration from Him, the ‘Maharshi Adhyatma Vishwavidyalay (Maharshi University of Spirituality)’ is being established.

Under His guidance, many devout Hindus are uniting and becoming active to establish the ‘Hindu Nation’.

Mr. Mayank Barjatya conducted experiments at Sanatan Ashram in Ramnathi using the ‘Esmog Spion’ instrument. In these experiments, he touched the sensor of the instrument first, then a seeker and then Paratpar Guru (Dr.) Athavale. Observations of experiments are given ahead.

5A. Readings taken after touching the sensor of ‘Esmog Spion’ instrument : Please see Table A 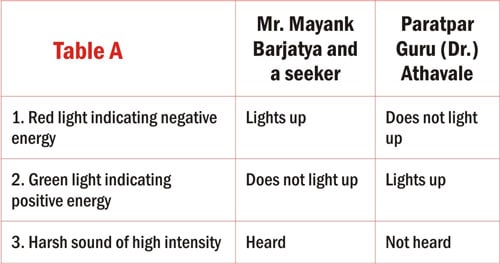 6A. Analysis of observations made by Mr. Mayank Barjatya

A 1. The body of an ordinary individual absorbs electricity and hence, the instrument indicates negative energy

The human body absorbs electricity just like an antenna does. In today’s times, wires are used in almost every object to a large extent. So is the case of Ramnathi Ashram and high tension electrical wires pass close to the Ashram. The electricity flowing through these wires is absorbed by the bodies of individuals in the Ashram and their electro-stress increases. Hence, the red light and sounding of the high intensity alarm of ‘Esmog Spion’ in respect of the experiment on individuals in the Ashram were on expected lines.

A 2. Energy is generated in the body of Paratpar Guru (Dr.) Athavale and is beyond the range (higher limit) of the instrument and hence, it did not sound the alarm

Paratpar Guru (Dr.) Athavale resides in the Ashram too. Since the high tension electrical wires pass close to the Ashram, the extent of electrical energy vibrations in His room is high. Hence, one would expect that this energy must have been absorbed by His body to a large extent; however, in reality, this did not happen and hence, during the experiment with Him, the red bulb of the instrument did not light up. This is because the body of Paratpar Guru (Dr.) Athavale also generates energy. The level of this energy is more than the higher limit of ‘Esmog Spion’ instrument and hence, there was no audible alarm either. This is not a normal phenomenon.

A 3. Medically Paratpar Guru (Dr.) Athavale is not in good health, yet He has high quality energy, and the associated reason

The observations made using the ‘Esmog Spion’ instrument are associated with Pranashakti (Vital energy) or chakras (Kundalini chakras such as Muladhar, Swadhisthan etc.), meaning, energy sources that provide energy for the functioning of the organs in the body.

6B. Analysis from the spiritual perspective

Paratpar Guru (Dr.) Athavale has attained the highest level in Spirituality through spiritual practice under the guidance of H.H. Bhaktaraj Maharaj.

A nuclear bomb is superior to an atom bomb. Similarly, among the Saints who experience Shanti (meaning, those whose spiritual level is above 90%), spiritual energy is at its highest level. As a result, they are able to take up missions at the spiritual levels (such as elimination of Raja-Tama components in the environment, guiding society to perform spiritual practice etc.). This aspect will be clear from Table B. The analysis of observations made by Mr. Mayank Barjatya (Point 6A) on the basis of his experiences matches the spiritual analysis (Point 6B). According to him, the instrument cannot measure the energy level which exceeds its upper limit.

Spiritually speaking, the state of Shanti is subtlemost. Hence, it has the highest energy when compared with other vibrations at the spiritual level. The energy emitting from Paratpar Guru (Dr.) Athavale (who is experiencing Shanti) exceeds the upper limit of the energy level that the ‘Esmog Spion’ instrument can measure. Hence, there was no audible alarm when He touched the sensor of the instrument.

An appeal to research scholars !

For some years now, there have been a lot of changes in the body of Paratpar Guru (Dr.) Athavale, such as His hair turning golden, skin turning yellow, nails turning yellowish and becoming transparent. All this is beyond the comprehension of the intellect. We will be grateful to get the assistance of research scholars in finding the associated facts, such as – What is the underlying scientific process ?, Which scientific instruments can be used to study these aspects ?

Kundalini
Dormant spiritual energy in the subtle-body. It is coiled like a serpent and consists of one central channel and two channels on its sides
Tama
One of the three components in the Universe denoting inertia and ignorance
Gurukrupayoga
Path of Guru's grace, which incorporates eight steps
Ashram
A place where a seeker can remain engrossed in spiritual practice through spiritual discipline
Anand
Bliss