(Useful for the coming World War times when the doctors, medicines etc. will not be available and at other times too!)

Saints, Prophets, Astrologers and others have predicted that the coming times are going to be very adverse, when besides our own health, caring for the health of our relatives will be a big challenge. During adversities, usually communication breaks down. It becomes difficult to take patients to a hospital, contact some doctor or buy medicines.

Sanatan Sanstha has published a Holy text series that will help in facing these adverse times. As of 30.12.2016, there are 12 Holy texts in this series. ‘Acupressure’ is one among these. We will be serially reproducing important parts from these Holy texts.

At the slightest indication of unease, we visit a doctor. Instead, if we use Acupressure therapy, it will not only save our valuable time and money, but will also help us treat the root cause of the ailment.

Acupressure Therapy means applying pressure on specific points on the body of an individual, thus activating his internal organs and through this process, improving the health of the individual.

There is uninterrupted flow of Chetana (Aspect of Chaitanya which governs the functioning of the mind and body) in the human body. Wherever blocks develop in the flow of Chetana, it leads to ailment of the associated organ. These blocks can be eliminated by pressing specific points on the body. These specific points are known as pressure-points.

3A. Commence Acupressure
therapy with a prayer to your Deity of worship

Pray thus – O’ Goddess ! It is by Your grace that I am able to administer Acupressure treatment on myself. I pray unto Your Holy feet for speedy recovery from the ailment (Name the ailment).

3B. Chanting should be done
by those suffering from Negative Energy

Everyone, especially those who are suffering from distress due to negative energies, should chant during the treatment

3C. Instructions regarding pressing the pressure-points

4. Instructions regarding the
description of pressure-points in this article

A. Words preceding the pressure-point such as (H 7), (LI 4) are actually the names of the respective pressure-points according to Acupressure therapy.

B. Other than the pressure-points on the vertical line dividing the body, rest of the points are symmetrically placed on either side of the body. During therapy, press the points on both the sides.

C. Length-width of every part of the human body is proportional to the width of the individual’s fingers. Hence, measurements for locating various pressure-points have been mentioned in terms of width of the fingers. According to this, width of 1 finger is taken to be width of the middle phalanx of any finger.

Note – Distance of 1 thumb is width of the middle phalanx of thumb. 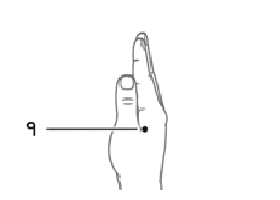 6.  Pressure-points associated
with ailments of the head and brain

7. Pressure-points associated with all eye ailments

8. Pressure-points on common
cold and blocking of the nose because of the cold

11. Pressure-points associated
with ailments of the digestive system

On both the sides of the wrist, from the fold up to four fingers width. (See Figure ‘11’)

We have introduced this therapy in Volume 1 : ‘Acupressure Therapy (Intro-duction)’; whereas, Volume 2 : ‘Acupressure therapy for common ailments’ covers treatment for over 80 day-to-day ailments.

Besides, these Holy texts also cover pressure-points to be pressed daily for remaining healthy. Readers should have these two Holy texts in their collection.