Rangoli is one of the 64 art-forms. This art-form has reached every household. Rangoli is drawn during festivals, celebrations, in temples and in houses. It is drawn to demonstrate beauty and personification of sanctity. Wherever sattvik rangoli is drawn, a sacred environment is created automatically. 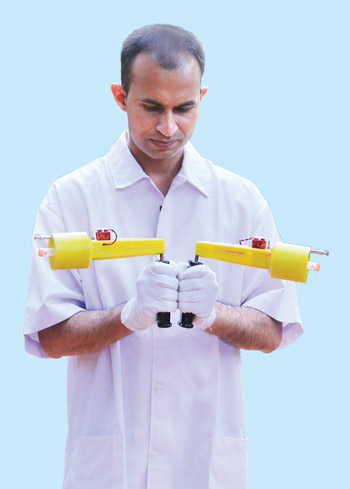 To understand the extent of positive vibrations in an object (object, premises, animal and individual), whether the aspect is sattvik or not and whether it is beneficial spiritually. It is necessary to have the ability to understand the subtle dimension. Saints have this ability and hence, can correctly identify the subtle vibrations in every object. Devotees and seekers have faith in every word of a Saint; they consider it to be the final testimony. However, rationalists have no faith in words, they ask for proof. Only when any aspect is proved through scientific analysis, meaning, proved using a gadget, they believe in it.

2. Nature of the tests

A comparative study of the readings taken before smearing the floor with cow dung, after smearing and upon drawing rangoli on the smeared floor was done.

3. Information on the constituents of the scientific tests

3A. Open space : This open space is in front of Mr. Atmaram Joshi’s house. His family has been performing spiritual practice for many years now.

3B. Smearing the floor with cow dung : The floor has been smeared with cow dung of a Bharatiya breed cow as mentioned in the scriptures. Bharatiya breed cow’s dung, which is a constituent of Panchagavya (A mixture of cow’s milk, curds, ghee, cow’s urine and cow dung) is Sattva-predominant. The open space has been smeared with cow dung by a lady-seeker and she has done this seva with a lot of bhav (Spiritual emotion). As per the scriptures, greater the bhav during seva, greater is the spiritual benefit.

3C. Sattvik (Sanatan-made) rangoli : Principle of Shri Saraswatidevi is attracted more to this rangoli pattern. This design has been made by an artist-seeker of Sanatan under the guidance of Paratpar Guru (Dr.) Athavale (Some sattvik rangoli patterns are given in Sanatan’s booklet – ‘Sattvik Rangolis’.)

4A. About UTS. : This instrument is also known as an aura scanner. By using this, the energy and the aura of an object can be measured. This was developed in 2003 by Dr. Mannem Murthy, a former nuclear scientist. He says that the UTS can be used for identifying any obstacles in a premises and in medical science, animal husbandry, Vedic science etc.

4B. Various constituents of the tests to be performed with the instrument and interpretations

4B 1. Negative energy : This energy is harmful. It is basically of two types :

4B 2. Positive energy : This is a helpful energy and to measure this energy, a sample of +ve energy is placed in the scanner.

4B 3. Measuring the aura of an object using UTS scanner : To measure the aura of an object, a sample that has maximum vibrations of the object is taken; for example, when the aura around an individual is to be measured, the individual’s saliva or a photo; for an inanimate object, a picture; for a plant its leaf; for an animal, its hair; for a premises, its mud or dust; in case of a Deity’s Idol, the sandalwood paste, shendur etc. applied to the Deity.

B. For the colour of the clothes not to affect the tests being conducted, the individual handling the instrument wore white clothes.

C. The readings were taken by two seekers at the same spot. For the vibrations of the first seeker not to affect the readings taken by the second seeker, the second reading was taken after 51 minutes.

6. Observations made using the UTS,

their analysis and conclusions (See table below)

Note : The aura of an object can be measured only if the scanner opens 1800. The scanner opening at an angle less than 1800 means the object has no aura.

6A. Analysis of observations on negative energy in the table

6B. Analysis of observations made after smearing the open space with cow dung

6C. Analysis of observations about the aura noted in the table – 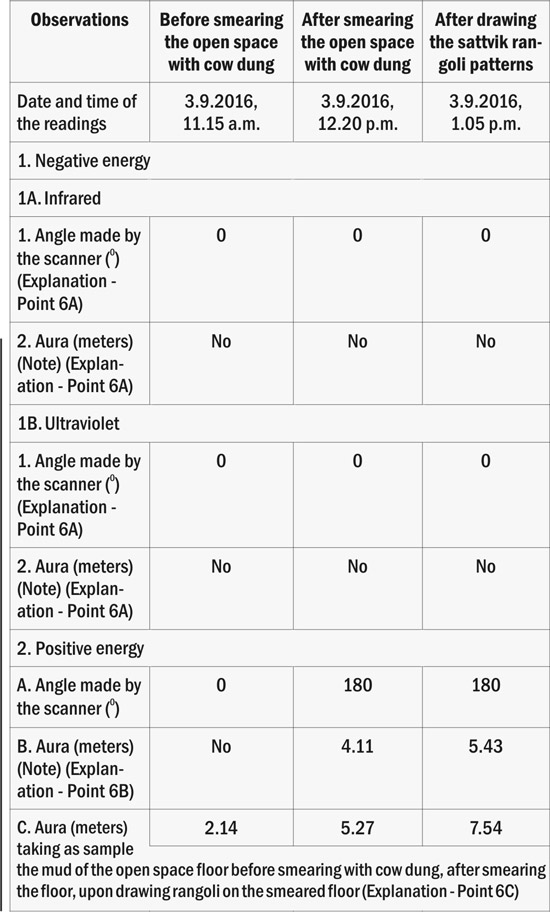 Thus, these scientific tests prove that simple acts such as smearing the floor with cow dung, drawing rangolis help the people at the spiritual level.