2. Significance and Purpose of Rakshabandhan

Rakshabandhan is the festival of rakhi. This is a festival to celebrate the bond between a brother and sister. It is celebrated on Shravan Pournima.

2. Significance and purpose of Rakshabandhan 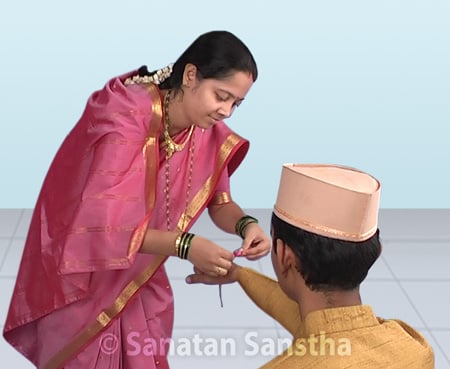 Rakhi – Bond between a brother and sister

The brother pledges to protect his sister in every birth. To symbolise this, he allows her to tie a string on his wrist. The sister complies so that he keeps his promise. Since time immemorial this custom is prevalent to keep a brother and sister in a relationship. The rakhi is a symbol of the purity of a relationship between a sister and brother.

A. Just as the brother is bound by a promise to protect the sister after getting a string tied onto his wrist, the sister too prays to God for his protection.

B. The Principles of Shri Ganesh and Shri Saraswati descend on Earth in higher proportion on this day. Both benefit from these Principles by praying for each other’s protection.

C. There is increase in the Tejtattva (Absolute Fire Principle). By waving Arati, the waves of the Tejtattva are emitted by the flame of the lamp and help in enhancing Tejtattva in the brother.

E. While tying rakhi, the Shaktitattva in the woman manifests and is transmitted to the man through the wrist. Thus, he derives 2% benefit from it for up to 5 hours.

F. The more the bhav (Spiritual emotion) in the sister, the more her motivation for God-realization and more is the grace of the Guru upon her, the greater is the effect of her prayer unto God for her brother, which results in greater spiritual progress for him.

The science underlying Rakshabandhan can be understood with the help of Divine Knowledge received by Sanatan’s seeker H.H. (Mrs.) Anjali Gadgil.

On the day of Shravan Pournima high speed waves of Yama Principle are activated in the universe. Particles of the Tejtattva are generated due to the friction between these high speed waves. These particles of Tejtattva are emitted into the atmosphere. They become inert because of their union with the earth particles and they create a covering on the ground. This is called raksha.

Bali, the king of Hell region, uses the Raja-Tama waves emitted by this raksha to nurture negative energies. Hence, a woman ties rakhi to a man as a symbol of invoking the Earth and taking Earth’s help in restraining this action of King Bali. 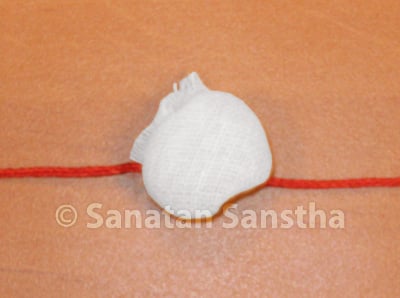 In the ancient times, akshata (Unbroken rice grains) were covered in a white cloth, which was tied with a silk thread as rakhi.

Akshata is all encompassing and the silk thread has the ability to rapidly transmit sattvik waves. Thus, rakhi is made from akshata and silk thread. When the sister ties the rakhi on her brother’s wrist, the waves of spiritual energy in the sister are transferred to the brother. This activates the Suryanadi (Sun channel) in the brother, and the Deity Shiva Principle in him is awakened. This results in disintegration of the Raja-Tama particles in the environment.

Over a period, this type of rakhi has ceased to exist and today, various types of rakhis are available in the market. Most of these are gaudy and not sattvik. The subtle effect of such non-sattvik rakhis is described ahead : 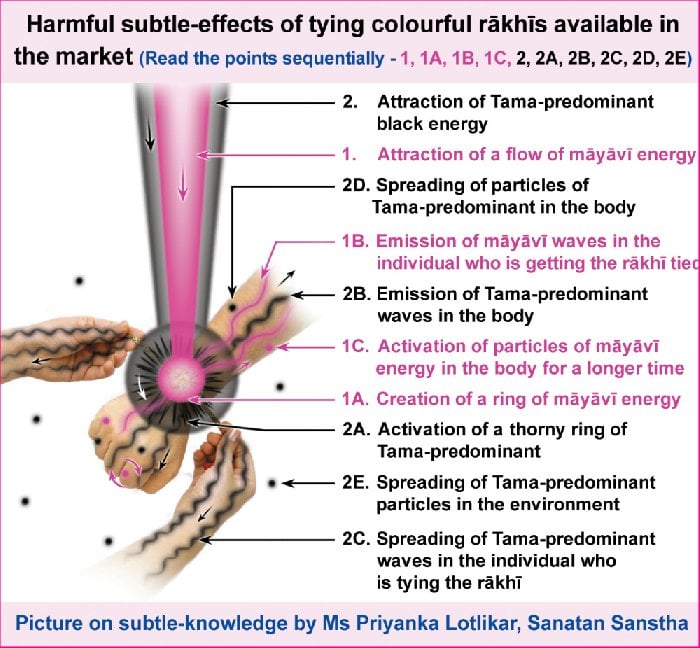 1. An illusory flow is attracted in the rakhi

1A. An illusory spiral is generated in the rakhi due to the various colourful and flashy items used in making the rakhi.

1B. Illusory waves spread in the body of the person upon tying such rakhi.

1C. Illusory particles remain active for a long time in the body.

2. Tama-predominant flow of black energy is attracted to the rakhi.

2A. A Tama-predominant and thorny spiral is generated in the rakhi and this spiral revolves in an activated form in the wrist of the person wearing the rakhi.

2C. Particles of Tama component spread in the body.

2D. Tama-predominant waves spread in the body of the woman tying the rakhi.

A sattvik rakhi is one in which the Divine Principle will get attracted and retained. The subtle picture ahead depicts how a Sanatan-made rakhi is sattvik. 1. Divine principle is attracted towards the Guru-disciple logo on the rakhi.

A. A spiral of this Divine principle is created.

2. A spiral is created in the rakhi in the form of nirguntattva (Non-materialised Principle).

3. A flow of Chaitanya is also attracted.

A. A spiral of Chaitanya is generated in the rakhi.

B. Through this spiral, a flow of Chaitanya is emitted into the environment.

C. Particles of Chaitanya are also emitted into the environment.

D. Waves of Chaitanya flow from the thread of the rakhi. Therefore, the brother obtains Chaitanya upon having the rakhi tied.

4. A flow of spiritual energy is attracted to the rakhi.

A. A spiral of spiritual energy is activated.

B. Particles of spiritual energy are emitted from this spiral.

1 thought on “Significance and purpose of Rakshabandhan”