Nariyal Poornima (Pournima) is a festival celebrated during the change of seasons. During Nariyal Poornima (Pournima) the rainfall decreases. Hence, on this day people go to the coastlines and worship the sea, that is, Deity Varun. Deity Varun controls water / rain. Due to such worship Deity Varun is appeased and one does not have to face dangers of the sea. This festival is celebrated along the entire coastline of Bharat with great pomp and splendour.

Importance of offering a coconut

to the sea on the day of Nariyal Poornima (Pournima) 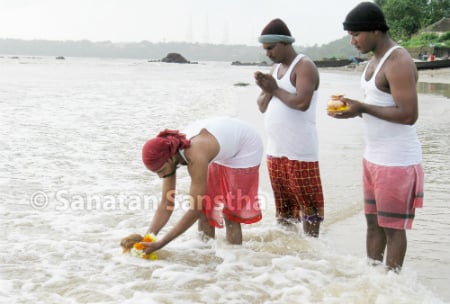 Offering a coconut to the sea 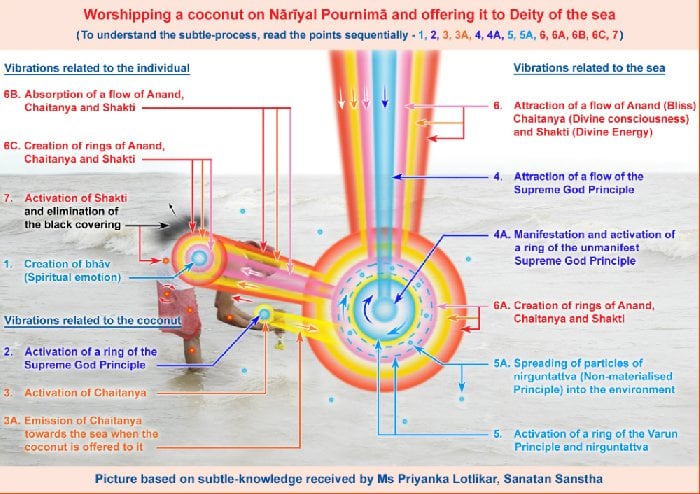 1. By paying obeisance to Deity Varun with bhav, a spiral of bhav is generated in the person.

2. By worshiping the coconut, a spiral of Divine Principle is activated in it.

3. A spiral of Chaitanya (Divine consciousness) is activated in the coconut.

5. The Principle of the Deity of rain (Deity Varun) is activated in the form of a spiral.

6. The nirguntattva (Non-materialised Principle) is activated in a higher proportion in the sea in the form of a spiral. Particles of nirguntattva spread into the environment.

7. A flow of Anand (Bliss) is attracted from God.

A. A spiral of Anand is generated in the sea. A flow of Anand is emitted towards the person.

B. A spiral of Anand is generated in the person too.

8. A flow of Chaitanya from God is attracted to the sea.

A. Due to this flow, a spiral of Chaitanya is generated in the sea.

B. The flow of Chaitanya is emitted towards the person.

C. A spiral of Chaitanya is generated in the person.

9. A flow of spiritual energy is attracted to the sea.

A. A spiral of spiritual energy is generated in the sea.

10. The black energy covering on the person is eliminated.

This Vedic ritual is performed on the day of Shravan Pournima, if there happens to be the lunar asterism Shravan on that day.

A. Importance: Shravani is a ritual performed when one resumes learning and teaching after a long vacation.

B. Method of performing the ritual: It is also referred to as Upkarma and Upkaran. If the Shravan lunar asterism appears on the Poornima (Pournima) of Shravan, then those following the Rigveda (Rugved) should perform this ritual on that day or on Nagpanchami day; if the Hasta lunar asterism appears, those following the Yajurved should perform it on the day of Shravan Poornima (Pournima), followers of the Samaved, in Bhadrapad on appearance of the Hasta lunar asterism and the Atharvaved followers on the Poornima (Pournima) day of the months of Shravan or Bhadrapad. Though this custom is very ancient and appropriate for the three classes, yet it is currently followed only by the Bhramins (Brahmans) and that too to a limited extent. Followers of the different Vedas (Veds) should celebrate Shravani according to their family norms. Usually this ritual is performed collectively.

Vedas
The most sacred Hindu scriptures, revealed directly by God
Tama
One of the three components in the Universe denoting inertia and ignorance
Anand
Bliss