(Vowed religious observances in the month of Shravan)

The mention of the Hindu lunar month of Shravan (Shravan maas) reminds us of various vrats. It is difficult for the common people to perform conducts according to the Vedas . Hence, to overcome this difficulty, the Puranas (The eighteen sacred Holy texts compiled by Sage Vyas) suggest observance of vrats. Most of these special vrats come in the month of Shravan. 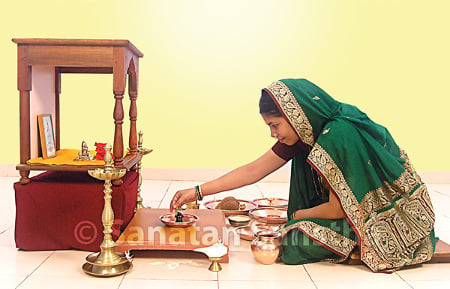 The presiding Deity to be worshipped for the vrat of Shravan Monday is Deity Shiva.

A. Ritual of vrat of Shravan Monday

B. Fasting associated with the vrat of Shravan Monday

On this day if possible, ‘nirahar’ fasting is observed. Nirahar fasting means the fasting observed only by drinking water when necessary during the day. Some people observe ‘nakta’ vrat. The period of three ghatika, that is, 72 minutes after the sunset or up to the sight of an asterism is called ‘naktakal’. The person who observes vrat does not consume anything during the day and takes food in this ‘naktakal’.

At some holy places the Shiva devotees perform a Kavar journey either on any one Monday or on every Monday of the month as per their ability and offer the water carried in the Kavar on the Shiva pindi. This journey is performed on foot without using footwear.

This vrat is concluded on the fourth Monday of Shravan when at some holy places meals are offered to people. By observing this vrat, Deity Shiva is appeased and the devotee gets Shiva-sayujya mukti, which means he attains oneness with Deity Shiva. Combining with this vrat, some women observe one more sub-vrat on every Monday and it is Shivamushti vrat. 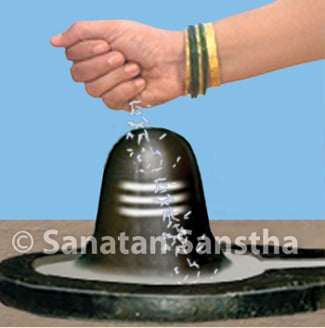 A. Following ingredients are necessary for ritual of vrat

Copper platter, a metal glass, a small copper kalash (metal pot) called achamani; sandalwood paste to offer to Shiva, white unbroken rice-grains, white flowers and bel leaves; a lamp with a wick, incense stick, camphor, an implement to light camphor-arati, washed rice to offer to Shiva as per the day, white sesame seeds, green gram or wheat, milk for offering as Naivedya , a folded betel leaf or two betel leaves and a betel nut and some coins for offering to the priest.

B. Actual ritual of Shivamushti vrat

1. Ritual is commenced by praying to Deity Shiva.

3. Thereafter following resolve is made:

This means, I am performing this Shivamushti vrat for destruction of all harmful things, increase of affection for husband, stability of the marital state, prosperity in respect of begetting child, grandchild, great grandchild; wealth and grains; for fulfillment of wishes for welfare, longevity, pleasure, riches etc. through my unconditional love for Deity Shiva.

4. Now sandalwood paste kept in the copper platter is offered on the Shivapindi.

5. Thereafter the white unbroken rice grains are offered on the Shivapindi.

6. Then white flowers are offered on the Shivapindi.

8. Then the washed rice grains are held in a fist and offered on the Shivapindi. While offering a handful of rice, following shlok is recited:

This means I pay obeisance to Deity Shiva who is calm, with five heads, who holds a trident and who is accompanied by Gans like Shrungi, Bhrungi, Mahakal etc. and who is benevolent.

The above act of offering handful of rice is repeated five times.

9. Thereafter a lit incense-cake is waved followed by waving a lit lamp.

11. In the end one prays to Deity Shiva withbhav (Spiritual emotion)once again.

One should perform worship in this manner on every Shravan Monday by offering a specific grain on the Shivapindi.

If a fifth Monday falls in the month of Shravan (Shravan maas) in a year, barley is used.

‘Mangalagour’ is a Deity which bestows long life to the husband. This vrat, which consists of puja (Ritialistic worship) of the Deity Mangalagour, should be performed by a newly-wed woman. It is expected to be continued for five to seven years after marriage on every Tuesday in the month of Shravan (Shravan maas). Puja of Deity Shiva and Shri Ganapati is performed along with Gouri in this vrat.

Vedas
The most sacred Hindu scriptures, revealed directly by God
Sayujya Mukti
Experiencing oneness with God
Naivedya
Food offered to the Deity as a part of ritualistic worship
Dharma
Righteousness
Achaman
Sipping water from the cupped palm thrice, while uttering the first three of the twenty-four names of Srivishnu and releasing the water into a plate from the palm while uttering the fourth name.