People in different countries have different styles of wearing clothes. Every culture is represented also by the dressing style worn by the inhabitants. But clothes too carry spiritual significance by the way they are worn. This article will help us in determining to choose the right set of clothes in order to imbibe more Chaitanya (Divine consciousness) and sattvikta.

Meaning: An individual should not dress perversely. The overall appearance of an individual is generally decided by the clothes he wears. The modern youth, under the pretext of fashion, wear multicolored clothes, short, tight-fitting clothes such as jeans, stretchable clothes etc. This reflects a perverted dressing style. In simple words, a perverted dressing style is one which generates Raja-Tama-predominant vibrations. Such a dressing style makes a man’s intelligence depraved, a slave to evil tendencies. He comes under the control of the six foes, such as lust, anger, and becomes a victim to attacks of negative energies. As against this, wearing sattvik clothes enable the wearer to imbibe Chaitanya, thereby making his mind and intellect sattvik. Besides helping attain good character and wisdom, it also helps in gaining protection from attacks of negative energies.

Every object has indigenous vibrations with its own attributes. The vibrations of clothes depend on factors such as the type of cloth, shape, colour, design, stitching of the cloth etc. The more sattvik these components are, the greater is the Sattva component of the final product, that is, the clothes. This article is all about how these components should be like from the perspective of sattvikta. Answers to the following questions will help in clarifying the spiritual aspect of clothes – Why clothes made from natural fibres such as cotton and silk should be preferred over those made from artificial fibres such as nylon or terrycot, which colours are sattvik, why clothes without heavy designs are more appropriate, why purity of clothes is essential etc. It will be seen that while selecting sattvikclothes, more than our likes or dislikes, it is the study of the science of vibrations that proves beneficial.

An average individual should wear sattvik clothes so that he can imbibe Chaitanya from them. The temperament of an individual with bhav (Spiritual emotion) is sattvik and because his activities are full of bhav, he can easily imbibe Chaitanya. Similarly, the march towards God-realization of seekers with a spiritual level over 60% and those who have lost body-awareness is brisk. To them, the type of clothing is insignificant. Yet, sattvik clothes do increase their sattvikta; besides, the society also benefits from their sattvikta. 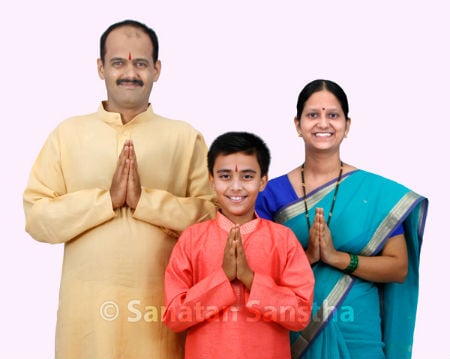 Sattvik clothes also help create positive sanskars (Subconscious impression) on children. Hence, it is preferable that children wear sattvik clothes. We pray at the Holy feet of Sri Guru to let more and more people be inspired to understand the spiritual facts about sattvik clothes and bring them into practice, and thereby enhance their sattvikta. – Compiler

1. The purpose of clothes

A. To protect from attacks of negative energies
taking place through the medium of distressing waves

According to the science of Spirituality, clothes should be conducive to the reception and emission of sattvik waves into the atmosphere. Only then can we be protected from attacks of negative energies in the atmosphere which take place through the medium of distressing waves.

An individual that wears clothes with variegated, predominantly black and bright colours gradually becomes Tama-predominant and eventually turns into a ruffian. 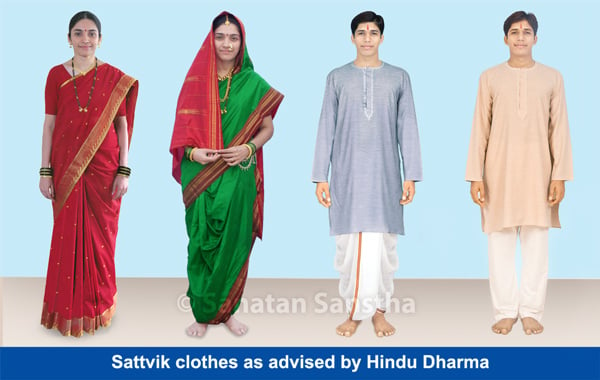 The Acharsamhita (Compilation of Code of conduct) to be followed as per the Hindu Dharma gives importance to sattvik clothes such as clean-washed, simple, plain, light in colour with minimum designs. Clothes of a uniform spiritually-beneficial colour, devoid of any design are considered more sattvik. This is because such clothes face no hindrance in attracting the Nirgun (Non-materialized) Chaitanya waves from the Universe and, depending on the need, emitting them maximally into the atmosphere. Plain-colour clothes are a symbol of transparency and are hence considered more sattvik from the spiritual perspective.

4. Sattvik method of wearing clothes as advised by Hindu Dharma

These have been decided based on the sattvik arrangement of the clothes. Clothes such as the nine-yard sari, six yard sari (A traditional attire of Bharatiya women), petticoat & blouse, dhoti, Sovale-uparna (A clean, washed, silk or cotton dhoti to be worn during puja), kurta-pyjama that take the wearer from Nirgun to Sagun (Materialized) are followed in Hindu Dharma.

A. Benefits of wearing sattvikclothes

If the undergarments and the outer-garments are clean and sattvik, and if they have suitable sattvikshape and appearance, the following benefits are obtained :
1. The outer-garments can absorb the flow of Chaitanya from the atmosphere to the maximum extent and then they can transmit it into the body.

2. The clothes help activate the Sagun Chaitanya. Simultaneously, on the strength of the Nirgun Principle, the introverted attitude provides energy to the karma in every activity.

3. If the clothes are neat and tidy from the spiritual perspective, then even the individual imbibes modesty. This modesty compels it to conduct itself at a spiritual level. Once the bhav develops as a consequence of the Spiritualized behaviour, the individual’s journey to God-realization begins.

This journey, ultimately, is responsible for uniting the individual with the eternal. Therefore, we find that, in Hindu Dharma, spiritual training is provided in such a way that even the clothes and ornaments create positive sanskars on the individual during its formative period.

In Kaliyug , the Tama component in the atmosphere is widespread, and even clothes in today’s times promote demoniacal conduct. Having abandoned the age-old Hindu culture, human beings in Kaliyug have become perverted.

This perversion is also apparent in the clothes they wear. Clothes with pictures of animals and ghosts, with a torn appearance, with sequins and coloured hanging threads, those that expose the body – all these make the individual an easy prey to attacks of negative energies. Ultimately, the individual becomes immoral and spends all his life in a perverted manner.

Reference: Sanatan’s Holy Text ‘How should the clothes be from a spiritual perspective ?’