When a designated act is supported by rituals as prescribed by Hindu Dharma, meaning the course defined by rituals that have a spiritual basis is adhered to, we obtain the grace of Deities. Celebrating birthdays is no exception. This also helps in protecting us from negative energies. Let us understand how to obtain maximum spiritual benefits from celebrating birthday as prescribed by Hindu Dharma.

There are as many temperaments as there are people and a corresponding number of paths of spiritual practice. This is one of the basic principles of Hindu Dharma. Based on this principle, there are different methods of abiding by Dharma. Though the methods vary, the benefit of the ritual is same as all methods bestow the Divine Principle. Thus, depending on individual temperament, one has to decide on a specific method. Given ahead are two methods of celebrating a birthday. 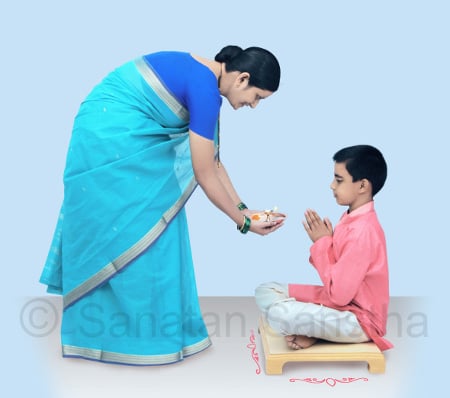 A. During the first year, the birthday should be celebrated every month, and thereafter, every year on the Janma-tithi (A lunar day of birth) by first applying ubtan to the whole body, followed by a bath, and then applying tilak of kumkum (Saffron) to the forehead.

B. With the resolve – ‘‘आयुरभिवृद्ध्यर्थं वर्ष (मास) वृदि्धकर्मं करिष्ये’’, a fistful of rice-grains is placed on a wooden seat or a platform in seventeen small heaps in the names of the Kuladevata (Family Deity), Nakshatra (Lunar asterism at birth), one’s parents, Prajapati, Surya, Ganesh, Markandeya, Vyas, Parshuram, Ram, Ashwatthama, Krupacharya, Bali, Prahlad, Hanuman, Bibhishan and Shasṭhidevata. The corresponding Deity is invoked in each heap and their Shodashopachar-puja (Ritualistic worship involving sixteen specific steps) is performed. Shasṭhidevata is offered Naivedyaof curd and rice, which is later fed to a cow or some other animal. The other Deities are offered Naivedya of sweets, which is then distributed as Prasad (Holy sacrament).

C. After offering a prayer, a mixture made from jaggery, a fistful of sesame seeds and half a cup of milk is to be partaken.

D. Invite relatives and friends for a meal. Donate food and other items as much as possible.

E. Avoid receiving money or gifts from others on this day.

The second method of celebrating a birthday is given ahead.

A. Abhyangsnan (Bathing after application of ubtan )

On the birthday, after application of ubṭan, bathe with clothes on (Bathing on the birthday symbolises offering a prayer unto God for forgetting the past and for constant reminder of the present). While bathing, the bhav (Spiritual emotion) should be that ‘the pure and Holy water of river Ganga is purifying my body and mind’.

‘Due to the sattvik energy flow associated with the Nirgun (Non-materialised) waves of water, purification of the subtle sheaths of the individual takes place. This makes the person (who is celebrating birthday) extremely sensitive and capable of imbibing waves of Chaitanya (Divine consciousness) that are available through the sanskars (Subconscious impressions) performed on it. Abhyangsnan purifies the vital body and vital energy sheath of the person, which in turn helps in creation of the first of the sanskars in Dharma known as ‘pavitrata’.

B. Wear new clothes after the abhyangsnan

Wearing new clothes amounts to giving a definite form to the Chaitanya that has formed around our body through the abhyangsnan and praying to God for protection from hurdles in our spiritual progress. The new clothes have been compared with a Chaitanya-enriched protective sheath created around the body by God. – A Scholar (Through the medium of Mrs. Anjali Gadgil, 22nd January 2005, 2.53 p.m.)

C. Pay obeisance to parents and elders in the family

This generates the sanskar of repayment of debts unto the parents and society and enhances humility in the person. Waves of blessings associated with the subordinate Principles emitted through the medium of elders purify the physical and the mental body of the individual and it receives blessings from subordinate Deities. Increase in respect for elders eliminates the decadence of the mind and helps in creation of the second of the sanskars in Dharma known as ‘nirmalata’.

D. Perform the ritual of abhishek (Consecration by ritualistic bathing with water, milk etc.) or ritualistic worship of the Kuladevata with complete devotion.

E. Ritual of aukshan (Ritual of waving a lit lamp)

Perform the ritual of aukshan on the individual whose birthday is being celebrated. Both, the performer and the receiver of the ritual of aukshan should have a bhav that, ‘Through the medium of each other, God Himself is performing this ritual and bestowing His blessings on us’. After completion of the aukshan, worship the Kuladevata or Upasyadevata (Deity of worship) and sprinkle akshata (Unbroken rice grains, usually smeared with kumkum and used in ritualistic worship) thrice on the head of the individual whose birthday is being celebrated.

Performing aukshan enhances the waves of Chaitanya in a person. This helps purify the subtle-body of the person. When the performer of the aukshan as well as the person (on whom it is being performed) commence the ritual with a prayer in the form of bhav that ‘God Himself is performing the task in the activity form and thus blessing themboth the persons obtain divinity. When the all-encompassing akshata are showered on the head of the person thrice after praying to the Kuladevata or the Upasyadevata, a flow of blessings in the form of Chaitanya waves spreads into the entire body of the person through the Brahmarandhra of the person. It is because of this, that the person obtains the strength of Ichha-shakti (Energy of will), Kriyashakti (Energy of action) and Dnyan-shakti (Energy of knowledge) from the Universe and the source of Chaitanya in its body is enhanced. This process (that results in emission of sattvik waves from the bodies of both the person) purifies the external environment. In addition, the other persons attending the celebrations benefit from this sattvikta, thus fulfilling the individual and the social objective of the ritual. The sanskar that helps obtain both the benefits in a single attempt is the third sanskar of Dharma, which is ‘shuchita’. This sanskar brings about purification of the gross and subtle bodies of the person. – A Scholar (Through the medium of Mrs Anjali Gadgil, 28.8.2005)

F. Present some gift to the individual whose birthday is being celebrated. Keep the following perspective while giving a gift. A child should be given a gift with a sense of duty to express appreciation. Do not have doership while gifting to an adult. When the gifting is sans expectations, after some time we even forget about the gift. Gifting on a birthday should be such. Having a sense of doership while gifting or having expectation of a gift generates a give-and-take account between the two. If an individual receiving the gift maintains an attitude that ‘it is the Prasad received by God’s grace’, then there is no generation of a give-and-take account.

G. Instead of using the clothes worn while bathing on the birthday, donate them without having any expectations. For the donation to be ‘satpatre danam’ (Donating to deserving people or organization), instead of giving the clothes to a beggar etc. offer them to a deserving individual, that is, give them to a devotee of God or to one working for the cause of Nation and Dharma.

Spiritual science underlying the act of donating the clothes worn during the bath on the birthday instead of retaining them for use: When bathing with clothes on, it is necessary to have a bhav that ‘the water in the form of pure and Holy river Ganga is falling on the body and purifying the gross body and the antahkaran (The inner sense organs consisting of the conscious mind, sub-conscious mind, intellect and ego). When a person (which makes its life expansive) with such bhav donates clothes, it amounts to diverting the flow of divinity (that has been activated through the water of Ganga because of our appeal) towards others through the medium of clothes. When clothes are used with this pure intent, it helps in reducing the Raja-Tama covering around the body of the other individual. Hence, this act helps accomplish the samashti (Spiritual practice for the spread of Spirituality) objective too. This highlights the pervasive perspective of the Hindu Dharma, which aims at getting vyashti (Individual spiritual practice that benefits only the seeker undertaking it) as well as samashti sadhana (Spiritual practice) performed by a individual through every act, in effect, getting the individual to abide by Dharma and uplifting the entire society.

On the birthday, after a bath with the clothes on, these clothes can be donated to anyone; however, the donor should essentially be sattvik, else donation given with expectations fetches no benefit. In fact, the one accepting such clothes may experience distress due to clothes being charged with Raja-Tama components.

In the earlier times, everyone undertook sadhana and thus were sattvik in nature. Hence, the clothes donated would benefit the recipient in the above-mentioned manner. In the Tretayug (The second in the cycle of four Eras since the origin of the universe), bathing the Guru on His birthday and thereby being eligible to use the clothes given by Him, was considered a sign of discipleship. – A Scholar (Through the medium of Mrs Anjali Gadgil, 21.1.2005)