Birthdays celebrated as per tithi (a lunar day) are very pious, because we receive a lot of Chaitanya (Divine consciousness) on this day. This Chaitanya should be utilized to the fullest. It can be achieved simply by avoiding certain acts. Let us understand the various acts which can be easily avoided and thus help receive maximum blessings from God.

1. Acts prohibited according to the scriptures

Cutting nails and hair, travelling, getting into conflicts and violence, eating and drinking prohibited items, and sexual intercourse should be avoided under any circumstance.

2. Do not extinguish a lit lamp on a birthday 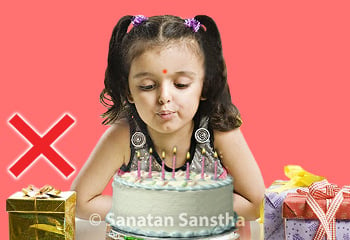 The flame of an oil lamp is compared with the gross activity being performed on the support of Panchapran (Five vital energies) in the body of the individual. Extinguishing the lamp denotes termination of the activity of the Panchapran, causing depletion of the vital energy of the individual, and leading to its death. A lit lamp getting extinguished signifies sudden, meaning an untimely death and is therefore considered inauspicious. – A Scholar (Through the medium of Mrs Anjali Gadgil, 21.1.2005) and God (Through the medium of Ms Madhura Bhosale, 8.5.2005)

3. Acts as per the western
culture and the underlying spiritual
science in not performing these acts

3 A. Do not give birthday greetings at midnight, but after sunrise

Spiritual science: Many people follow the western culture and give birthday greetings at midnight. At this time, the concentration of Raja-Tama particles in the atmosphere is high. Greetings given at such a time do not bear fruit. As per Hindu culture, the day begins with sunrise. This is the time of spiritual practice of Sages and Saints, due to which the environment is more sattvik. Greetings given after sunrise are therefore fruitful. Hence, birthday greetings should necessarily be given after sunrise. – A Scholar (Through the medium of Mrs Anjali Gadgil, 28.8.2005)

3 B. Do not celebrate a birthday by lighting candles

Spiritual science: It is because they ape the western culture blindly, that many people celebrate birthdays by lighting candles and cutting a cake. Since a candle is Tama predominant, upon lighting it, it emits negative vibrations into the premises. So also, extinguishing a lit flame is considered inauspicious and is prohibited in Hindu Dharma. That is why; candles should not be lit and then purposely extinguished on a birthday.

3 C. Do not celebrate a birthday by cutting a cake

3C 1. Using a knife over a cake on a birthday destroys the Divine waves of Chaitanya that are attracted due to the ritual of aukshan (Ritual of waving a lit lamp in front of a Saint or an individual)

Using a knife over a cake amounts to an inauspicious act. Hence, performing such an act on an auspicious day such as the birthday creates malevolent sanskars (Subconscious impression) on the younger generation. Cutting a cake after the ritual of aukshaṇ amounts to obstructing the Chaitanya (generated from the aukshaṇ) by distressing vibrations. Purposely performing such a dissolution oriented act on any auspicious occasion is an indicator of an attitude of harming Dharma. – A Scholar (Through the medium of Mrs Anjali Gadgil, 17.6.2006)

Readers may wonder that if a cake should not be cut with a knife on a birthday, then what about the other days? Is cutting of fruits and vegetables with a knife or chopper on other days prohibited too? These questions are answered ahead.

3C 2. Moving a knife on any object obstructs Chaitanya and hence a sin is accrued.

Compiler: Is cutting a cake with a knife inauspicious on days other than a birthday?

A Scholar: Cutting anything with a knife on any day is undoubtedly an inauspicious act. From the convenience point of view, however, such acts of destruction have been considered acceptable at an inferior level. If such an act results in obstructing Chaitanya, then 10% sin is accrued. However, if it is done as an act of convenience, then only 2-3 % sin is accrued. (Through Mrs Anjali Gadgil)

3C 3. Chopping vegetables with a knife is a routine act; hence, Chaitanya waves are not obstructed

Compiler: If cutting a cake with a knife is inauspicious, is chopping of vegetables with a knife or vegetable chopper correct or incorrect?

A Scholar: In the Kaliyug (Era of strife) as a matter of convenience, implements such as knives, vegetable choppers and scissors are used for cutting eatables. As far as possible, such implements should not be used, since they generate swiftly moving distressing vibrations. Whenever possible, split the vegetable with the hands. Vegetables split in this way are more sattvik. In the earlier times, people ate boiled bulbs-tubers and roots; these used to be handled entirely with their hands during the stages of cooking. Therefore, they would essentially eat the food charged with the Sattva component, the charging being through the medium of their hands. Implements such as knives and choppers are inventions in the Kaliyug.

Chopping vegetables is an effortless action. It does not initiate any process that is without sanskars and that which can obstruct the flow of Chaitanya. Hence, in Kaliyug, it is considered acceptable at an inferior level.

4. Analysis based on subtle-knowledge of a
birthday celebrated according to the western culture

‘In 2002, I happened to attend a birthday party of a girl that was celebrated according to the western culture. There was a huge cake with several lit candles on it. The steps followed during the celebration are mentioned ahead. Pictures based on subtle knowledge, the analysis of the actions and the distress experienced by others is also given ahead.

4 A. Analysis based on subtle-knowledge

4 A 1. Subtle-process taking place while singing ‘Happy birthday to you’

Analysis : Many negative energies surrounded the well wishers. They strangled the singers. Since the song contains no sattvikta, the negative energies, too, sang the song subtly. As a result, lot of distressing waves spread in the environment.

Effect of the action : While singing the song, two individuals coughed intensely. One girl had a sore throat and the throat started to ache very badly.

4 A 2. Picture depicting the subtle-process taking place while blowing out candles 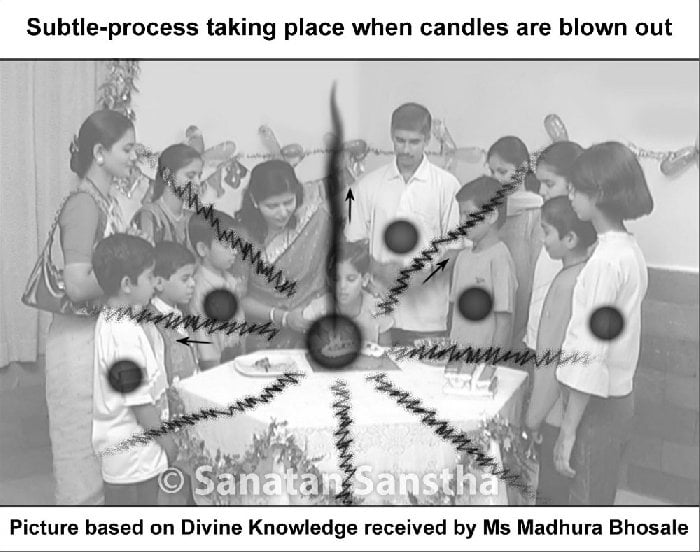 Analysis based on subtle-knowledge : Tama waves of the Vayu-tattva (Absolute Air Principle) spread in the environment. Black waves entered the mouth and nose of those standing around the cake, and black energy accumulated in their bodies in large proportion.

Effect of the action : It was because of an attack of severe stomach ache, that one man left the hall.

4 A 3. Subtle-process taking place while cutting the cake

Analysis based on subtle-knowledge : Even before cutting the cake, 5-6 ghosts were hovering at the venue. Later, they emitted black energy into the cut portion of the cake and subtly turned the cake black.

Effect of the action : One girl who had come as a guest and I developed a throbbing headache.

4 A 4. Subtle-effects when the child eats a slice of cake on her birthday

Effect of the action : The girl experienced nausea and developed a throbbing headache, which lasted for two days.

4 B. Distress experienced by the invitees

Since the western style of celebrating birthday is a Raja-Tama-predominant activity, it becomes easier for negative energies to cause distress through this medium.

In the above analysis based on subtle-knowledge, we have seen some examples of the types of distress caused by negative energies. This method, far from providing benefit of Chaitanya, is responsible for distress due to negative energies instead, and therefore should be avoided.

5. Picture depicting the subtle-
benefits of celebrating birthday as per tithi 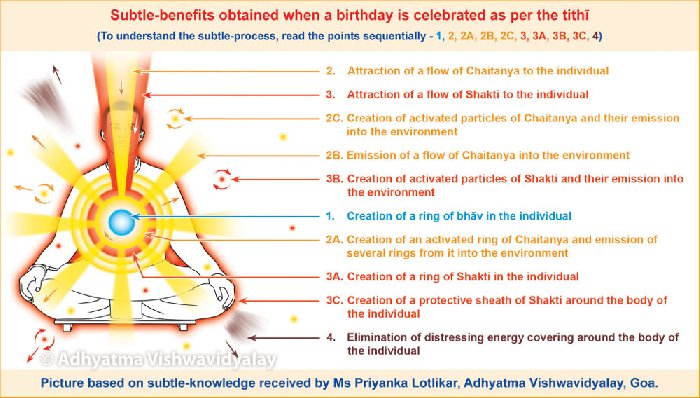 2 thoughts on “Do you know the effects of these acts on your birthday?”