Vatpournima (or Vatasavitri) is a vowed religious observance performed by married women on the full moon day (pournima) in the Hindu lunar month of Jyeshtha to prolong their wifehood.

1. Objective of the vrat

This vrat was started by married women to prolong their married life, like Savitri did. Among the famous, chaste women in Bharat, Savitri is considered a role model. She is also considered the symbol of eternal married life.

2. Deity of the vrat

Deity Brahma, along with Savitri is the main Deity while Satyavan, Savitri, Narad and Deity Yama are the subordinate Deities in this vrat.

3. Importance of the banyan tree

When Deity Yama took away Satyavan’s life, his wife Savitri debated on the scriptures with Him for three days. Appeased with her, Deity Yama brought Satyavan back to life. The discussion took place below a banyan tree. Hence, the banyan tree is associated with Savitri. 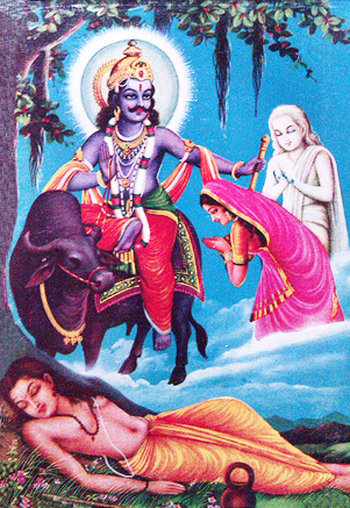 A. The banyan tree survives even the Dissolution of the Universe. It lives on with time.

B. During the Dissolution of the Universe, a child Mukunda slept on a banyan leaf.

C. In Prayag, Shriram, Lakshman and Sita rested under the everlasting banyan tree.

E. The Banyan, Pipal (Bo tree), Audumbar and Shami (Indian Mesquite tree), are considered sacred and are used in sacrificial fires. Amongst these trees, the life of the banyan is the longest. Besides, it spreads extensively by means of its aerial roots.

F. Cataract is cured if the mixture of cotton crushed into gum of banyan tree is put into the eyes.

4. Method of performing the vrat 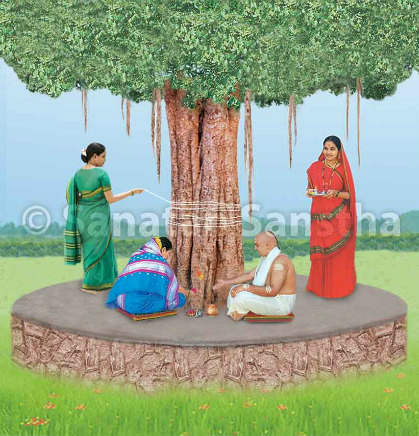 Method of worship on Vatpournima

First, the married woman should make a sankalpa thus – “May my husband and I have a healthy and long life.”

Shodashopchar-puja (Ritualistic worship involving sixteen specific substances) of the banyan tree should be performed. After the ritual of Abhishek, a thread should be tied thrice in a clockwise direction around the trunk of the banyan tree. At the end of the puja, one should pray thus to Savitri and Deity Brahma, “Let me have a happy, uninterrupted and joyous married life, let me get the same husband in every birth, let there be prosperity with food and the family.”

Women should fast the entire day.

5. The Divine knowledge received by a seeker
doing spiritual practice as per Gurukrupayoga

Following is the information given by ‘one scholar’ to the seeker receiving knowledge, Mrs. Anjali Gadgil.

Compiler : Do we get the same benefit by worshipping a branch of the banyan tree compared to worshipping the tree itself? 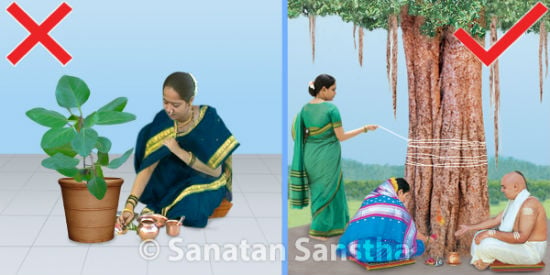 Divine Knowledge : The main trunk of the banyan tree contains the Shiva principle. Hence worshipping the banyan tree with bhav (Spiritual emotion) helps us to gain 30% of the benefit of the worship, compared to only 2-3 % gained by worshipping it’s branch. Since the branch is separated from the main trunk and hence from it’s life, it has very negligible capacity to attract and transmit Chaitanya (Divine consciousness). Bringing such a branch home and worshipping it, does not give much benefit. In the vicinity of nature, life exists in abundance and hence the fruits of Chaitanya, can be derived in higher proportion.

Compiler : It is said that this kind of vrat of Vatapaurnima is to be observed only after visiting Kashi (also known as Banaras, one of the holiest cities in Bharat). The oldest married lady of the house, who started observing this vrat after visiting Kashi, passes the tradition on to her eldest daughter-in-law after the demise of her husband. What is the purpose behind this practice ?

Divine Knowledge : This is just an established tradition.

6. The spiritual experience of a seeker about Vatpournima worship

On 11th June 2006, I could not go and physically worship a banyan tree. So I worshipped the banyan tree by drawing it’s picture on a piece of paper. I prayed to the banyan tree “My dear Deity, I could not go out. I am worshipping you, with the bhav that you are present here.” At that time I could actually see the banyan tree with it’s parambya (aerial roots) hanging down. After that when I went close to H.H. Dr. Athavale’s photo, I could see a large banyan tree. At that time, a thought came to my mind “Parampujya Gurudev, this is only due to your blessing and grace” and I experienced overwhelming spiritual emotion. For two to three days before this incident, I had been experiencing bliss from within. – A Seeker, Miraj, India.

(Members of the Andhashraddha Nirmoolan Samiti consider ‘Vatpournima’ as a farce. How great is the Hindu Dharma, which considers that God exists in every particle of the Creation and teaches us to worship trees as Deities, and how petty are these so called intellectuals, heretics and communists, who consider the Hindu Dharmaa farce! – Compiler)