The Gudi with an auspicious sankalpa is hoisted on the pratipada (first day) of the bright fortnight of the Hindu lunar month of Chaitra in the Vasant rutu of Uttarayan (Six-month period between Makar Sankranti (January 14) and Karka Sankranti (around July 14), when the sun travels towards the north on the celestial sphere). It demonstrates the power of sankalp-shakti (Energy of resolve). Pratipada signifies that, ‘Henceforth every step we take will be a step ahead for our prosperity’; hence, any benevolent sankalpa made on this day will be fruitful. Hence, on this day we must hoist a Gudi symbolising a sankalp unto the Absolute Truth and thereby make an auspicious beginning to the New Year. – H.H. Parashram Madhav Pande Maharaj, Sanatan Ashram, Devad, Panvel.

On Gudipadwa, one should wake up early in the morning and take a bath, that is a sabhyang snan (Manglik snan) 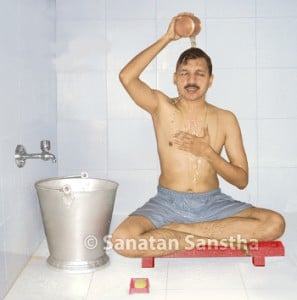 Sabhyang snan consists of an oil massage until oil is absorbed by the skin, followed by a warm water bath.

B. Days in the year for taking a sabhyang snan

2. First day of the festival of Vasantotsav, meaning the Shukla paksha Pratipada (first day in the bright fortnight) of the Hindu lunar month of Phalgun.

3. The three days of Diwali, that is the Chaturdashi (fourteenth), the Amavasya (new moon day) of Ashvin and the Pratipada of lunar month of Kartik.

2. Oil should be applied to retain the elasticity of the skin.

3. Warm water is auspicious and pleasing to the body. Bathing after an oil massage retains only requisite amount of oiliness in the skin and hair. Hence, an oil massage is necessary before a bath. Application of oil after a bath is inappropriate.

D. Utterance of the ‘desh-kal’ (time and place)

The deshkal is required to be uttered during a sabhyang snan.

The utterance of desh-kal encompasses everything – the number of years from the birth of Deity Brahma to date, the current manvantar (a period of 31,104,000 years started by Manu), the mahayug (great era) in that manvantar and the upayug (sub era) in that mahayug. It gives an idea of the vast time that has elapsed and that which is yet to come. We may think that we are someone great; however, from the vastness of the time of the Universe we can gauge how insignificant and small we are. Utterance of the desh-kal helps reduce the ego in us.

3. Decoration with toran (a bunting of mango leaves and red flowers)

After a bath we should decorate the lintel of every door with a toran. Red flowers are used because red colour symbolizes auspiciousness. 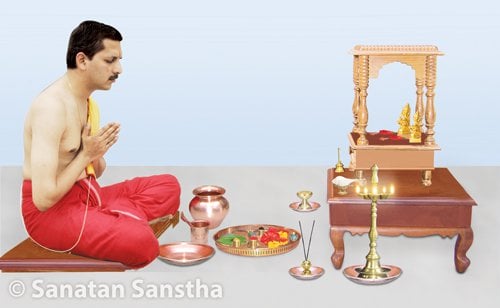 First puja is performed as a routine ritual. A Mahashanti is performed on the New Year’s day. The Mahashanti begins with the worship of Deity Brahma as He created the Universe on this day. He is offered davna during the worship. Later, hom (Fire-sacrifice performed to appease Deities) and havan (Offering of oblations in the fire) are performed along with offerings to Brahmans (One who belongs to the first of the four varnas (Classes), studies scriptures and imparts knowledge to the society). Then Shrivishnu, who manifests Himself in countless forms is worshipped. Obeisance is paid to Him by reciting the mantra – ‘नमस्ते बहुह्वपाय विष्णवे नमः ।’, meaning, ‘I bow to You O Shrivishnu, You who manifest in innumerable forms.’ Then the Brahmans are offered dakshina (Offering in cash or kind, especially one given to a Brahman after a ritual) and if possible historical and mythological texts are presented to them. It is said, that by performing this Mahashanti one is cleansed of all sins, no new sins are generated, the lifespan is increased and one becomes wealthy.

A. Reason for offering davna in daily puja in the month of Chaitra

The table ahead compares the soothing effect of some substances. That will clarify why in the month of Chaitra when the weather changes and summer heat begins to be felt, davna is offered in the puja. Though sandalwood and davna have the same ability to impart a soothing effect, sandalwood can do so only when it is wet unlike davna which is effective throughout the day.

By performing a Samvatsar-puja, we get cleansed of our sins, our lifespan is prolonged, a woman’s married life is prolonged and we acquire peace. 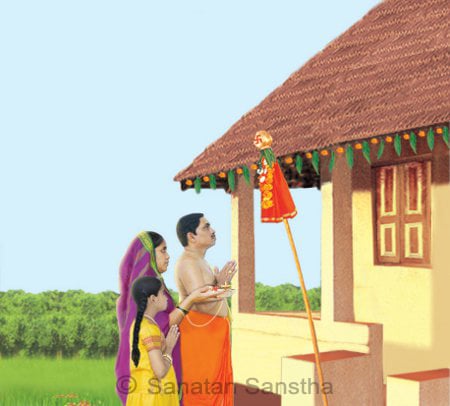 B. Method of hoisting (Gudipadwa Videos – 8)

B1. After seeing the appropriate timing of the tithi (Lunar day) and the panchang , the Gudi should be hoisted immediately after sunrise.

B2. A bright green or yellow cloth adorned with zari (brocade) is tied to the tip of a long bamboo shoot, over which sugar candies, neem leaves, a twig of mango leaves and a garland of red flowers are tied.

This is then hoisted after placing a silver or copper kalash (pot) in an inverted position over it. The Gudi should be erected outside the main entrance on the ground, adjacent to the threshold, on the right hand side (when seen from the house). While erecting it, the Holy symbol of swastik should be drawn with a rangoli and the bamboo of the Gudi placed on the swastik. The Gudi should be slightly inclined towards the front, and not erect. Beautiful designs with rangoli should be drawn on the floor in front of it.

B3. Then uttering ब्रह्मध्वजाय नमः ।’, meaning, ‘I offer obeisance to the flag of Deity Brahma’ and accompanied by a sankalpa (Resolve), puja (Ritualistic worship) of the Gudi is performed.

B4. At the time of sunset the Gudi should be lowered after offering jaggery as Naivedya

The needy should be given different kinds of offerings. For example offering free drinking water by setting up a stall. This appeases the ancestors.

Perform puja and listen to the narration of the panchang from the astrologer or priest, meaning, benefits of the coming year.

Meaning : By listening to the discourse on tithis one acquires Lakshmi (wealth), that of the day of the week imparts longevity; that of lunar asterisms nullifies sins; listening to information on yog cures disease and achieves success in whatever one plans by listening to the entire narration. Listening to the panchang daily endows the merit equivalent to bathing in the Holy river Ganga.

Since neem has the highest ability to absorb Prajapati frequencies as compared to any other substance, its leaves are partaken as prasad on this day. The table ahead gives the ability of certain substances to absorb these frequencies. From this we will learn why neem leaves are partaken on Gudipadwa day and milk, curd, ghee and sugar are avoided in the month of Chaitra.

Method of preparing the special mixture of neem on Gudipadwa

The one who partakes the mixture is blessed with relief from diseases, destruction of disorders, happiness, knowledge, long life, wealth & prosperity.

(References and the method of making it are quoted in the Samvatsar Panchang of every year.)

On this day fields should be ploughed. Ploughing churns the soil. The subtle soil particles get charged with the Prajapati waves and its ability to germinate seeds increases manifold. Akshata (unbroken rice grains, smeared with vermilion) should be sprinkled on the instruments used in farming and on the oxen amidst recitation of the mantra, which generates the Prajapati waves. Labourers working in the fields should be gifted with new clothes. The meal given to the labourers on this day should comprise of ripe pumpkin, lentil, rice, and a sweet prepared from gram lentil (cooked till soft and ground to a paste with jaggery) etc.

We should spend this day happily, listening to auspicious songs and stories of Holy men.

On 9th April 2005, the day of Gudipadwa I was assigned the seva of hoisting the Gudi in the Ashram. After a bath I reported early in the morning at the reception desk. At that time some seekers were unloading bags of wheat from a truck. I prayed to Deity Hanuman and began to assist them. Within fifteen minutes five seekers succeeded in unloading 82 bags of wheat. While doing so I felt the energy of Deity Hanuman infusing my body. In fact I had never before lifted such heavy bags. After this I could perform my seva of hoisting the Gudi and ritualistic worship in the planned time. I could perform the worship more confidently and with fewer mistakes. During the puja I was constantly getting a vision of Deity Hanuman and was experiencing chaitanya (Divine consciousness). – Mr. Nilesh Padhye

1 thought on “Method of celebrating Gudipadwa”

tithis
Dates as per Hindu lunar Almanac
Tithi
A lunar day
Tama
One of the three components in the Universe denoting inertia and ignorance
seva
Service unto the Absolute Truth, that is, God Principle
Sankalp
Resolve
Sabhyang snan
An auspicious warm water bath after an oil massage and application of fragrant ingredients
Rangoli
Holy designs made from white crushed powder
Pratipada
First day in the bright fortnight of the moon
Prasad
Offering made to God and then distributed to devotees
Panchang
Hindu almanac
Naivedya
Food offered to the Deity as a part of ritualistic worship
Manvantar
A measure of time. There are 14 Manvantars in each Kalpa. Each Manvantar (a period of 31,104,000 years) is started by a Manu. The current Manvantar is the seventh Manvantar.
Hom
Performing a sacrificial fire to appease Deities
Havan
Offering of oblations in the fire
Ganga
A Holy Bharatiya river emerging from the crown of Deity Shiva
Dakshina
Offering made to a Brahman / a Guru after a ritual, as thanksgiving for imparting knowledge
Ashram
A place where a seeker can remain engrossed in spiritual practice through spiritual discipline
Amavasya
New moon day
Akshata
Unbroken rice grains smeared with vermilion used in ritualistic worship
Sattva
One of the three components in the universe, signified by purity and knowledge
mantra
A syllable or words representing spiritual reality or an aspect of God uttered to protect oneself or to achieve a specific goal