1. On the day of Mahashivratri, Shivatattva (Deity Shiva’s Principle) is a thousand times more active compared to other days. To avail maximum spiritual benefit most from the Shivatattva on this day, chant ।। Om Namah Shivay ।। and worship Deity Shiva with bhav (Spiritual emotion).

2. Story about Shivaratri : There was a cruel hunter who was a great sinner. Once when he went to hunt, he came across a Shiva temple. Since it was the day of Mahashivratri, he saw many people performing worship devoutly, singing bhajans (Devotional songs), kirtans (Devotional discourses) etc. He made fun of them, saying that they were fools who consider a stone to be a God and chant ‘Shiva, Shiva’ and ‘Har Har’, and he proceeded to the jungle. He climbed a tree to look out for a prey; but the tree leaves blocked his vision. He began to pluck the leaves. At that time, he was chanting ‘Shiva, Shiva’. The leaves he plucked fell on a Shivapindi (Deity Shiva’s sacred symbol, which includes the shalunka) that was beneath the tree. At day break, he saw a deer. He was about to release a bow when the deer begged for its life. The deer also told the hunter what happens when a sin is committed, and went away. The tree was a bilva (Aegle marmelos) tree. Unknowingly, the hunter had remained awake through the night, had offered bel leaves to Shiva and chanted Shiva’s Name. All this destroyed his demerits and he obtained knowledge. This story indicates how Deity Shiva is pleased even with a worship performed unknowingly.

With expectation and incidental

Fasting, worship and remaining awake the whole night are the three aspects of this vrat.

Ritual of the vrat

One should have only one meal (ekabhukt) on Magha Krushna Paksha Trayodashi (Thirteenth day in the dark fortnight of eleventh month in the Hindu lunar almanac). On the next day, that is, Chaturdashi morning, the sankalp (Resolve or intent) for the vrat should be made. In the evening, bathe in a river or a lake according to religious restrictions. Wear a rudraksha mala (A rosary made with rudraksha seeds) and apply bhasma (Holy ash). At the time of Pradosh, go to the temple of Deity Shiva, meditate, perform Shodashopchar-puja (Ritualistic worship involving sixteen specific substances ) and offer water to Shiv-Parvati. Deity Shiva should be offered 108 lotuses or bel leaves, accompanied by chanting. Then Arghya (An oblation of water to God) should be given after offering flowers. After worship, recitation of verses and chanting of moolmantras (the primal mantra), the flower offered to Deity Shiva should be taken and kept on one’s head. Also one should ask pardon for the sins committed.

‘On the day of Mahashivratri, Shankar is also offered the mango blossoms.’ – Gurudev Dr. Kateswamiji

On the eighth day of the dark fortnight of the Hindu lunar month of Jyeshtha, Deity Shiva and on the fourteenth day, Revati should be ritualistically worshipped with blue flowers. The tuft of Kevada plant should be offered to Deity Shiva during the udyapan (Ritual of concluding) of the vrat of Mahashivratri.

It is said that Deity Shiva should be worshipped four times in the four parts of the night of Mahashivratri. This is called Yam-puja. In every Yam-puja, God should be given a sabhayang snan (bath). Anulepan (applying scented paste) should be performed, also leaves of dhatura (Mexican poppy), mango and bel should be offered. Arti (A ritual of waving a lit lamp in front of a Deity, accompanied by singing of hymns) should be performed with 26 lit lamps, made from rice flour. At the end of the worship,108 lamps should be donated. Each worship has different mantras. Arghya should be given while reciting these mantras. Dancing, singing and listening to stories etc. should be done to remain awake through the night. At dawn, Deity Shiva should be worshipped again, after a bath. A meal should be offered to a Brahman to mark the end of the fast. After taking his blessings, the vrat should be concluded. Concluding ceremony should be performed after doing this vrat for twelve, fourteen or twenty four years.

The substances of worship of Deities undergo changes according to time.

For example, blue flowers should be offered to Shiva on the eighth day of the dark fortnight of the Hindu lunar month of Jyeshtha, as on that day blue colour has the ability to absorb the Shivatattva as much as the green bel leaves.

Analysis based on ‘subtle-knowledge’ of Abhishek (Consecration by ritualistic bathing with water, milk etc.) performed on Shivapindi on Mahashivratri day

Sanatan’s seeker priest Shri. Damodar Vaze performed Abhishek on the Shivapindi at Verisurl, Goa from 8.15 a.m. to 10 a.m. on 26.2.2006. a ladyseeker, Ms. Madhura Bhosale, conducted analysis based on ‘subtle knowledge’ of the event, which is given ahead.

I felt a lot of coolness in the temple and felt the nirgun-tattva (Non-materialised Principle) in a greater proportion.

Worship of Shri Ganapati was going on when I felt that the Ganapati Principle which was invoked in the coconut, was coming out from the nirgun dimension to the sagun (Materialised) dimension and perform the worship of Deity Shiva. I could see in the subtle, that red colour light rays were travelling from the coconut to the Shivapindi slowly. The rays were offering themselves at the Holy feet of Deity Shiva with great humility and respect. While watching the process, my eyes felt a sort of coolness.

1. The coolness in the temple reduced and I felt heat (that is, Shakti (Divine Energy)). I became conscious of the increasing sagun-tattva of Deity Shiva.

2. The Dwarpal (Sentinel) Idols near the sanctum sanctorum looked sattvik. I felt that the bhav of the Dwarpal on the right was awakened.

3. There was a slow slim stream of water on the pindi. I saw the closed-eyed Deity Shiva in a meditative posture. I saw the Ganga enter His hair from the sky. When Abhishek continued on the pindi, I felt it was being performed on Deity Shiva’s matted hair.

4. The brass serpents near the Shivapindi suddenly came to life and were moving their heads in ecstasy.

I had a vision of Shrikrushna (wearing His yellow dhotI (A rectangular piece of unstitched cloth, usually around 4-5 metres long, wrapped around the waist and the legs and knotted at the waist by Hindus)) near the Shivapindi. I could clearly see the Holy feet of Shrikrushna.

While the Abhishek was going on, I saw a Shivapindi in the fallen leaves of tree. A cow was performing its Abhishek by releasing milk in a steady stream on it. I could see tears of bhav in her eyes. After the worship, the priest said to me, “This Shivalinga is swayambhu (Self-materialised). There is a river near the temple. In the earlier times, a cow from a village nearby used to cross the river daily and release milk on the pindi.”

Sanatan’s seeker-priest Shri. Damodar Vaze was offering bel leaves on the Shivapindi. I felt he had a bhav that he was offering bel leaves on the Holy feet of Shiva. While offering the bel leaves, he touched Shiva’s Holy feet with reverence and gently. By the gentle touch, Deity Shiva started coming out from His meditative state. First movement of His eyelids was noticed. Then, slowly He opened His eyes. One-tenth of His eyes were open. I felt the waves of sattvikta, Chaitanya (Divine consciousness), Anand (Bliss) and Shanti (Serenity) were being emitted from His open eyes. Looking at the Shivapindi, I felt coolness and Anand. Radiant yellow rays of light were slowly emitting from the Shivapindi into the entire sanctum sanctorum in greater proportion.

While spreading my palms over the camphor Arati, I felt my palms absorb Shakti. While moving my hand over my head, eyes and neck after partaking the Arati, there was a reduction in the fatigue I had been experiencing so far.

The two brass serpents near the Shivapindi looked more radiant than before and their bhav toward Deity Shiva also seemed to have completely awakened.

After the worship of Deity Shiva, the bhav of the Dwarpal on the left awakened and he looked in the same state two hours after the worship too. Looking at his feet, my bhav also increased, and his right foot moved to the left of the left foot like that of the flute-holding Shrikrushna.

A spiritual experience on the day of Mahashivratri

In the evening of Mahashivratri, while chanting the Name and looking at the sky, two lady-seekers felt the atmosphere was sattvik.

1. My chanting was going on with complete concentration on the evening of Mahashivratri and my emotion of gratitude towards God awakened.

2. Looking at the sky, I felt very good. The atmosphere was like that in the Shivalok (Deity Shiva’s abode). There was sattvikta in the atmosphere. I had a spiritual experience that despite physical sufferings, our chanting goes on from the heart in the pious atmosphere.

H.H. (Mrs.) Anjali Gadgil from the section associated with subtle-knowledge was also chanting there at the same time. She too felt that she was sitting in the void of the universe and chanting, and that the atmosphere had become more sattvik than usual. 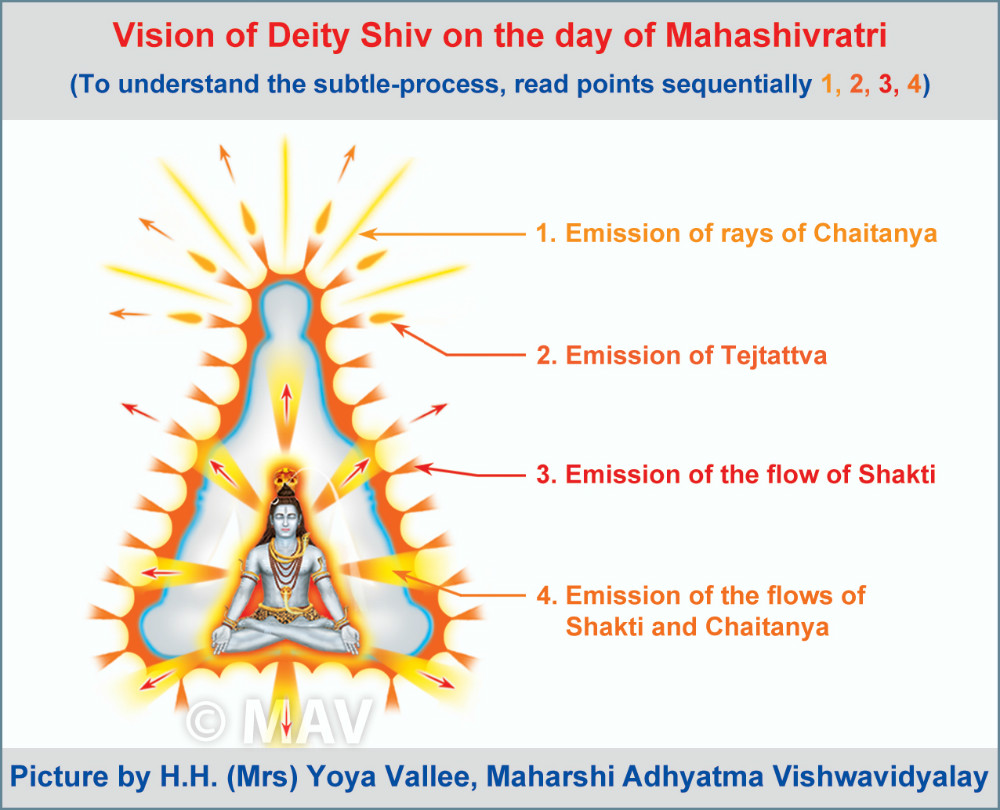