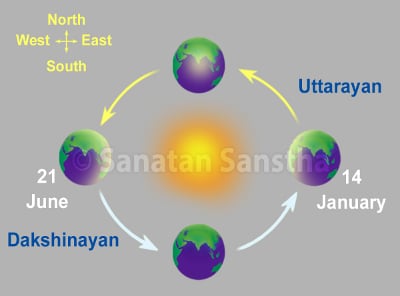 This festival, unlike other Hindu festivals, is not dependent on the tithi (position of the moon) but on position of the sun. On this day, the sun enters the zodiac sign of Capricorn. To compensate for the difference that occurs due to the revolution around the sun, sometimes the day of sankrant gets pushed ahead by one day.

1 A. Which God is worshipped on Makar Sankranti ?

This is the biggest festival of the Sun God. Life cannot be imagined in the absence of the Sun, which is the only factor that makes life energetic and gives its bright light for survival. This day is most important to also worship Shri Vishnu and Goddess Mahalakshmi.

Sankranti is considered a Deity. According to a legend Deity Sankranti killed a demon named Sankarasur.

Makar Sankranti is celebrated to let go of our differences and increase love in us. Spiritually, this day is very conducive for spiritual practice and to imbibe Chaitanya in the environment.

3. Information on Deity Sankranti is available in the panchang

The northward movement of the sun begins on this day. The period from Karka sankrant (the passage of the sun into the zodiac sign of Cancer) till Makar sankranti is called the dakshinayan. A person who dies in the dakshinayan period has a greater chance of going to Yamalok (southward region), than one who dies during uttarayan (northward revolution).

4 A. Makar Sankranti and the winter solstice

Many Bharatiyas conflate this festival with the winter solstice, and believe that the sun ends its southward journey (Sanskrut : Dakshinayan) at the Tropic of Capricorn, and starts moving northward (Sanskrut : Uttarayan) towards the Tropic of Cancer, in the month of Pousha on this day in mid-January.

The date of winter solstice changes gradually due to the Axial precession of the Earth, coming earlier by approximately 1 day every 80 years. Hence, if the Makar Sankranti at some point of time did mark the day after the actual date of winter solstice, a date in mid-January would correspond to around 300 CE, the heyday of Bharatiya mathematics and astronomy.

Sankranti is celebrated all over South Asia with some regional variations. It is known by different names and celebrated with different customs in different parts of the country.

In Bharat it is known by different regional names.

In other countries too the day is celebrated but under different names and in different ways.

4 C. Importance from the point of view of spiritual practice

On this day, from sunrise to sunset, the environment has more Chaitanya (Divine Consciousness); hence those doing spiritual practice can benefit from this Chaitanya.

How to celebrate Makar sankranti during adverse times?

In last few months there were some restrictions laid on the celebration of festivals due to the COVID-19 pandemic. Although this situation has not completely improved, the public life is being restored slowly. The following points should be kept in mind while celebrating festivals at such times.

1. All the rituals of the festival (e.g. Haldi-kumkum ceremony, giving ‘Tilgul’, ‘Bornhan’ etc.) should be performed by following all the rules laid down by the government considering the local conditions in your area to control the spread of COVID pandemic.

2. When organizing a haldi-kumkum ceremony, call the women in a group of 4 at intervals of 15-20 minutes, instead of inviting everybody at the same time.

3. Tilgul should be distributed in small bags avoiding direct exchange.

4. Masks should be used when meeting each other.

5 A. Benefit of highest merit acquired by a Holy dip on the day of Makar sankranti 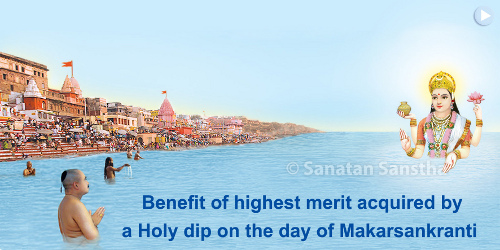 The time from sunrise to sunset on Makar sankranti is auspicious. A Holy dip during this period carries special significance. Those who take a Holy dip in the rivers Ganga, Yamuna, Godavari, Krushna and Kaveri at the Holy places situated on the banks of these rivers acquire the highest merit.

5 B 1. Importance of making an offering during an auspicious period

The period from Makar sankranti to Rathsaptami is an auspicious period. Any donation and meritorious deeds in this period prove more fruitful.

What items to donate during Makar Sankranti ? (video)

5 B 2. Substances offered on Makar sankranti

‘An offering of new vessels, clothing, food, sesame seeds, pot of sesame seeds, jaggery, a cow, a horse, gold or land should be made depending on the capability. On this day, married women also make some offering. They take things from unmarried girls and give them sesame seeds and jaggery in return.’ Married women organise a ceremony of haldi-kumkum (applying vermillion and turmeric to the forehead) and gift articles to other married women.

1. Importance of giving a gift

Giving a gift to another woman amounts to surrendering to the Divinity in the other, through body, mind and wealth. Since the period of Makar sankranti is favourable for spiritual practice, a gift given during this period results in bestowal of Divine grace and the individual gets the desired fruit.

2. What should be gifted on makar sankranti ?

How to offer ‘upayan’ during Makar Sankranti ? (video)

Nowadays a wrong trend of gifting inappropriate commodities like soaps and plastic items has started. Instead, substances that are complementary to spiritual practice and are indicators of a married life, for example incense sticks, ubtan (fragrant powder used during bath), religious texts, Holy texts, pictures of Deities, CDs on spiritual topics etc. should be gifted.

‘The festival of Makar sankranti requires small mud pots called sugad (in Marathi language). Vermilion and turmeric powder is applied to the pots and a thread is tied to them. They are filled with carrots, jujube fruits, sugarcane pieces, pods, cotton, chickpeas, sesame seeds with jaggery, vermilion, turmeric etc. Five pots are placed on a wooden seat, rangoli is drawn around the seat and worshipped. Of these, three are gifted to married women, one is offered to the Tulsi plant and one is retained.’ 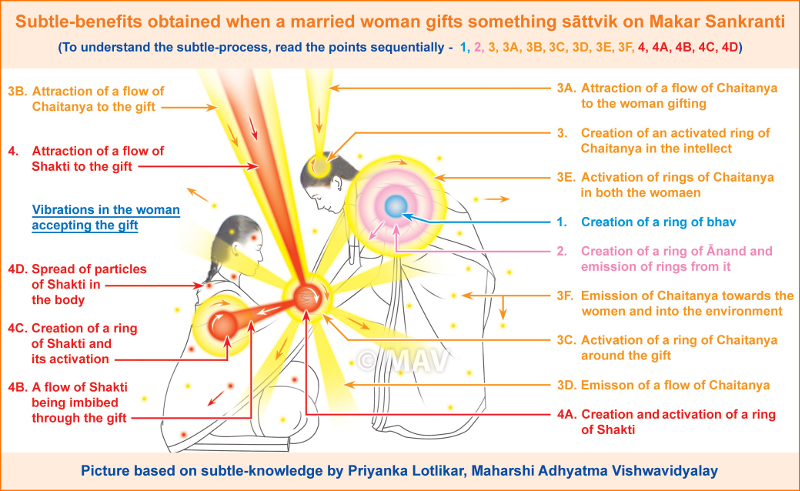 6. Use of sesame seeds

Use of Til (sesame) during Makar Sankranti (video)

Spiritual significance of Til (sesame) (video)

6 A. Importance of sesame seeds

6 A 2. Importance according to Ayurved

Since Sankrant falls in winter, consuming sesame seeds is beneficial.

6 A 3. Importance according to Spirituality

1. Since sesame seeds have a greater ability to absorb and emit sattva frequencies, consuming tilgul helps improve spiritual practice. Distributing tilgul to one another results in an exchange of the Sattva component.

2. Using sesame seeds in shraddha prevents demons from bringing obstacles during the rite.

Subtle-picture of a sesame seed

‘During the period of Sankrant, brushing teeth, talking harshly, cutting trees or grass and acts provoking sexual urges should be avoided.’

‘If you come across any Holy text stating that black clothes should be worn on the day of Makarsankranti’ then kindly let us know on email id : [email protected]

Today, when the Nation and Dharma are in peril, flying kites for the sake of entertainment is akin to, ‘Nero playing the fiddle while Rome burnt’. If the time spent on flying kites is used for the development of the Nation, it will make it progress faster; and if used for spiritual practice and missions related to Dharma, then society and the individual will benefit.

This is the day after Sankrant. On this day a Deity killed the demon Kinkarasur.

Ubtan
Fragrant herbal powder used for cleansing the body
Tulsi
Holy basil plant
Tithi
A lunar day
Tama
One of the three components in the Universe denoting inertia and ignorance
Rangoli
Holy designs made from white crushed powder
Panchang
Hindu almanac
Haldi-Kumkum
Married lady applying haldi (turmeric powder) and kumkum (vermilion) to other married ladies.
Ganga
A Holy Bharatiya river emerging from the crown of Deity Shiva
Dharma
Righteousness
Ashram
A place where a seeker can remain engrossed in spiritual practice through spiritual discipline
Sattva
One of the three components in the universe, signified by purity and knowledge