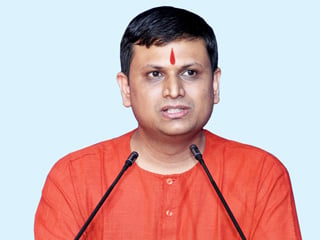 Mumbai – As journalists are very closely associated with political life, from the viewpoint of society and the nation they have a big responsibility to shoulder. In this state of stress generated in society, due to the Corona crisis journalists have to face both economic problems and psychological stress. Chanting the Name of God activates the spiritual energy within the self making the mind positive and allaying stress. National Spokesperson for Sanatan Sanstha appealed to the journalists who are believed to be comprising the fourth pillar of democracy, to increase the spiritual strength within them and contribute towards rebuilding of a new Bharat.

He was addressing journalists during an online discussion held by Sanatan Sanstha and Hindu Janajagruti Samiti on June 27, 2020 in which 149 journalists from three states of Maharashta, Goa, Gujarat and Chattisgarh were participated.

1. The mind instantly accepts favourable situations not unfavourable ones. No situation by itself is stressful. It is the personality defects in an individual that make it stressful. One can get out of these situations by taking autosuggestions.

3. If spiritual remedies such as chanting are performed along with autosuggestions then one is blessed with the grace of God. During a period of crisis this is significant as remembering God generates positive energy and gets one out of the crisis.