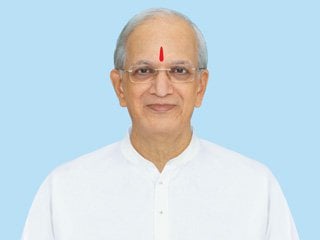 1. Samashti chanting which is complementary to establish the
Hindu Rashtra (Nation) and the benefits obtained by chanting

A. Seekers who have been chanting the Names of Kuladevata / Kuladevi and Deity Dattatreya for vyashti sadhana and chanting for removal of distress from negative energies effectively for at least 5 years, should now chant the next japa in samashti sadhana complementary for establishing the ‘Hindu Rashtra (Nation)’. They need not chant the earlier Names.

B. Seekers whose samashti seva is being performed appropriately should also chant the samashti japa. They need not chant the earlier japas.

1 A. Spiritual benefits from each japa

1. ||श्री विष्‍णवे नम:|| (Shri Vishnave Namaha |) – This will speed up the establishment of the Hindu Rashtra and bring stability to the country.

3. || श्री भवानीदेव्‍यै नम: || (Shri Bhavanidevyai Namaha |) – Blessings of the Goddess will provide the spiritual strength for establishing the Hindu Rashtra.

One-third of the time of the day assigned for chanting should be given to each japa, meaning, if 3 hours are assigned to chanting, then each japa should be chanted for 1 hour.

1 B. Sadguru (Mrs.) Binda Singbal’s
spiritual experience while reading the above matter

While reading the above matter, I felt Shakti (Divine Energy) flowing rapidly in my body. I felt a lot of Shakti at the Sahasrar-chakra, and I could hear (in the subtle dimension) the blowing of a conch of the Hindu Rashtra which will be established in the future.

2. Spiritual remedies such as chanting to be performed by seekers
who chant for samashti and to eliminate distress at the samashti level

The severity of the adverse times is increasing now. As per the significance of time, at an average, 70% distress seekers face is at the samashti (Society) level and 30% is at the vyashti (Individual) level.

If you do not benefit from the japas even after 2-3 weeks or if it has not been possible to find out suitable remedies because of severe distress, ask a Saint or seekers who are above the spiritual level of 60%.

2 A 1 . Regarding placing the image of Deity or Namestrip on the chakra

Seekers can place the image of the Deity which they find as per the ‘Pranashakti flow system’, on the chakra in the body. If the Name so found out is of Deity Agni or Deity Sun (associated with Tej Principle), place the image of Durgadevi.

Which side of the image or Name-strip of the Deity should touch the body – the front side or the reverse side – this is given in Sanatan Sanstha’s Text ‘Spiritual remedies on ailments caused by obstructions in the Pranashakti flow system’ on Page 24 under Point 1 D 6 – ‘If it is not possible to perform remedies by moving the fingers over certain parts of the body or perform nyas, place an image of the Deity whose chanting is to be done during spiritual remedies using the sagun or nirgun side’. If the Names so found out are ‘Shunya’, ‘Mahashunya’, Nirgun’ and ‘Om’, place the side with the letters of the Name-strip on the front side of the body.

As of now, lockdown is in place in the country; images of all Deities may not be available with seekers. If seekers have old (Printed earlier), but not spoiled images of the Deity or Name-strips, these can be used. In case this is also not possible, if any seeker who has attained the spiritual level of 61% or seekers who have bhav (Spiritual emotion) but do not have spiritual distress are accessible, in the Ashram or at home, the Namjapa of the Deity should be written in their handwriting.

If all these options are not possible to implement, the seeker should himself write the Namjapa by offering a bhav-enriched prayer.

2 A 2. For seekers who do not sit for spiritual remedies

They should chant ‘Shri Vishnave Namaha I’, ‘Shri Siddhivinayakaya Namaha I’ and ‘Shri Bhavanidevyai Namaha I’ throughout the day. These seekers need not place the image of the Deity on the chakra of their body. If they face any distress, they should chant the Name as per the ‘Pranshakti flow system’ for the specified time for the distress according to the severity of distress (Note), and for the rest of the time, chant ‘Shri Vishnave Namaha |’, ‘Shri Siddhivinayakaya Namaha |’ and ‘Shri Bhavanidevyai Namaha |’, each for one-third of the time.

2 A 3. Saints and seekers chanting for samashti

Saints chant for some hours for samashti. Some seekers who are at spiritual levels above 60% chant for eliminating the obstacles caused by negative energies during the Hindu Rashtra Jagruti Sabhas, agitations, etc.

They should chant ‘Shri Vishnave Namaha |’, ‘Shri Siddhivinayakaya Namaha |’ and ‘Shri Bhavanidevyai Namaha |’, each for one-third of the time.

1. Earlier instructions had been given that all seekers should chant ‘Nirgun’ and place Name-strips of ‘Nirgun’ on the Sahasrar-chakra and Vishuddha-chakra from 1.4.2020 to 30.6.2020.

Henceforth, seekers should not chant ‘Nirgun’ nor place the Name-strips on these chakras.

2. Seekers meditate between 9.30 and 10.00 in the morning or night. This time may be considered in the time of chanting alloted during the whole day. The total time allotted for chanting during the day should be equally divided between chanting ‘Shri Vishnave Namaha |’, ‘Shri Siddhivinayakaya Namaha |’ and ‘Shri Bhavanidevyai Namaha |’.

For example, if you have to chant for 3 hours, the above Names should be chanted for 1 hour each. Seekers who do not sit for spiritual remedies should chant these Names for maximum time during routine activities.

While chanting ‘Shri Vishnave Namaha I’, ‘Shri Siddhivinayakaya Namaha I’ and ‘Shri Bhavanidevyai Namaha I’ during routine activities or when sitting at a specific place, make a mudra by touching the tip of the thumb to the tip of the index finger.

Sahasrar-chakra
Notional opening situated at the crown of the head, which leads to realisation of Brahman and Shiv
seva
Service unto the Absolute Truth, that is, God Principle
Samashti sadhana
Spiritual practice for the spread of Spirituality
Ashram
A place where a seeker can remain engrossed in spiritual practice through spiritual discipline