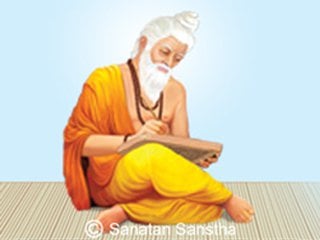 When we talk about Sages automatically our hands get folded in obeisance and the head bows down in respect. Several Sages have made Bharat a land of penance by performing spiritual practice as per path of Yoga. They have written vastly on Dharma and Spirituality. Propagating Dharma and spiritual practice in society they have made it cultured. Though the man of today is the descendant of Sages from ancient times he has forgotten it and is unaware about Their spiritual significance. It is only after you perform spiritual practice that you realise the importance of Sages and understand the powers They possessed.

Rushi is the one who performs spiritual practice for a long time with the objective of God realisation.

2. Date as per Hindu lunar calendar of Rushipanchami

Panchami (fifth day) in shukla paksha of Bhadrapad is called ‘Rushipanchami’. On this day the Scriptures advocate performing of the vowed religious observance (vrat) of worshipping Sages.

3. Objectives of the vowed religious observance

By performing this vowed religious observance the ill effects of menses, seclusion and contact, in women, are nullified.

4. By performing this vowed observance
on the day of Rushipanchami and worshipping
the Seven Sages (Saptarshi) along with Arundhati
the ill effects induced by menstruation are nullified

On this day by worshiping the Seven Sages and Arundhati, women are able to nullify ill effects induced by menstruation, seclusion and contact. This gives us an idea of the prowess of Sages. As Sages possess energy from knowledge, yoga, penance and the soul with Their powers ill effects of actions are nullified and sins are expiated.

5. Different kinds of powers, energy active
within them, effects on subtle bodies and the process
of expiation of sin and percentage of overcoming destiny and sin

6. Extraordinary importance of the Guru

As power of the Guru supersedes all other kinds of powers if full-fledged efforts are made to win the grace of Shriguru then a seeker receives maximum spiritual strength, makes rapid spiritual progress and attains Final Liberation (Moksha). Hence those who have been blessed with a Guru need not worry at all. He takes total responsibility for the disciple who has surrendered unto Him completely. This also lays emphasis on the importance of performing individual (vyashti) spiritual practice and that for the sake of society (samashti) as per Path of Guru’s Grace (Gurukrupayoga).

By performing spiritual practices of yoga and penance Sages successively receive powers from yoga and penance. Since ancient times different Sages would worship different Deities. That is why They won the grace of Deities and received energy from Them.

8. Path of Yoga followed by Sages in Satya, Treta
and Dwapar yugs (eras), subtle colour of the Path of
Yoga, examples and number of Sages following these paths of Yoga

9. Difference between Sages and Saints

Note : Rushilok is between Jana and Tapa regions

10. In the Kaliug various Sages and ascetics are
assuming births as Saints to complete their spiritual practice

As even after performing spiritual practice through various paths of Yoga spiritual emotion was not being evoked in Them many Saints and ascetics were not feeling satisfied. Hence in the Dwaparyug some of Them assumed birth as gopis (milkmaids) and showered spiritual love upon the manifest form of God, Shrikrushna. Similarly in the Kaliyug different Sages and ascetics have taken birth as Saints and performing spiritual practice along Path of Devotion have attained Absoluteness. As Sages combined devotion with energy from yoga, penance, knowledge and Deities They acquired soul energy and energy from Guru’s grace too and attained Final Liberation (Moksha). Remaining in the company of Saints and with Their guidance many embodied souls in Kaliyug have been uplifted. When in the Kaliyug a vision of real Saints is rare, there are more than 100 Saints in Sanatan Sanstha. Is this not bountiful grace of the Guru ? In this adverse Kaliyug we are able to get a vision of different Saints and ascetics in the form of different Saints performing spiritual practice along Path of Guru’s Grace (Gurukrupayoga) from different subtle regions and yugs (eras). For this we seekers offer gratitude at the Holy feet of all Saints.

11. Path of Yoga, examples of some
Saints from Sanatan Sanstha and number of Saints

Gratitude at the Holy feet of Saints and the Guru