Why should the dead body be preferably cremated during the day time?

The dead body should preferably be cremated during the day time because cremation is a Tama act. Since the night is related to Tama component, the proportion of negative energies which themselves are Tama-predominant is high during this period. This period is conducive to the attacks of negative energies and therefore, if cremation is done during the night, it can cause hindrance in attaining momentum before death by the linga-deha (Subtle body) of the deceased. 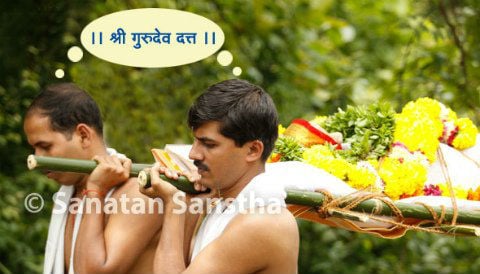 Why are only bamboo sticks used for making a bier?

The hollow of the bamboo stick has sound energy, which moves in a circular manner. The sound waves emitted by this sound energy create subtle flames of fire in the atmosphere. Keeping the dead body on the bier is in effect keeping it in space charged with these waves and it results in the formation of a protective sheath around the dead body.

What is the science underlying the
act of laying the deceased on his back and tying
his big toes together, before taking him to the crematorium ?

This helps in the conjoining of the right and left energy channels, leading to movement of the waves from the body in a circular manner within the body itself. The subtle putrefying gases that remain trapped in the voids of the body are forcefully pushed in an upward direction and are expelled through the mouth or through the nose or they stabilize in the hollow of the skull and are expelled in the process of breaking of the skull during cremation.

Why is a pitcher (mud pot) carried
to the crematorium along with the dead body?

Through the flow of sound waves emitting from the sound energy that has converged into the pitcher, Raja-Tama-predominant waves are generated around the dead body. Hence, the dead body is continuously protected from negative energy attacks. The coal embers in the pot emit Tej-tattva (Absolute Fire Principle)-predominant waves, which in turn create subtle sound waves. The waves related to Tej-tattva emitting from the fire in the pot continuously disintegrates the Raja-Tama laden waves in the atmosphere.

Why should everyone chant ‘Sri Gurudev Datta’
aloud while carrying the dead body to the crematorium?

The function of the Datta Principle is to impart momentum to the linga-dehas of ancestors. Hence, by chanting the Name of Deity Dattatreya, the linga-deha of the deceased and also those of his ancestors that are wandering in the atmospheric boundaries gain momentum in lesser time.

1. The karta (The person who performs the rite) should lead the funeral procession. He should hold a pot containing the ignited fire in his right hand.

2. The family members and relatives of the deceased, should lift the bier and start walking behind the karta. Four people should shoulder the bier. Nobody should stand between the karta and the bier. All people in the procession should walk behind the bier.

3. The dead body should be carried with its head in front during the funeral procession.

4. All should chant aloud ‘Sri Gurudev Datta’ till they reach the crematorium.

5. When the funeral is half way through or when it reaches the entrance of the crematorium, the bier is lowered and placed on the ground. The karta then offers two pinḍas of barley/rice flour. Pinḍas are then placed on darbhas (A type of grass used in rituals involving sacrificial fires and rituals for the departed souls such as shraddha) to the right and left side of the dead body. Water mixed with sesame is offered to the pinḍa on the right side through the pitru-tirtha on the palm while reciting the mantra – ‘श्यामाय अयं पिण्ड पतिष्ठत ।’ ~.Thereafter, water mixed with sesame is also offered to the pinḍa on the left side while reciting the mantra ‘शबलाय अयं पिण्ड उपतिष्ठतु । ’.Then, people who had shouldered the rear of the bier exchange their positions with those in the front, the bier is lifted and the funeral procession moves ahead.

Tama
One of the three components in the Universe denoting inertia and ignorance
Shraddha
Ritual performed on the death anniversary according to Hindu Almanac, to appease departed ancestors? subtle bodies
mantra
A syllable or words representing spiritual reality or an aspect of God uttered to protect oneself or to achieve a specific goal