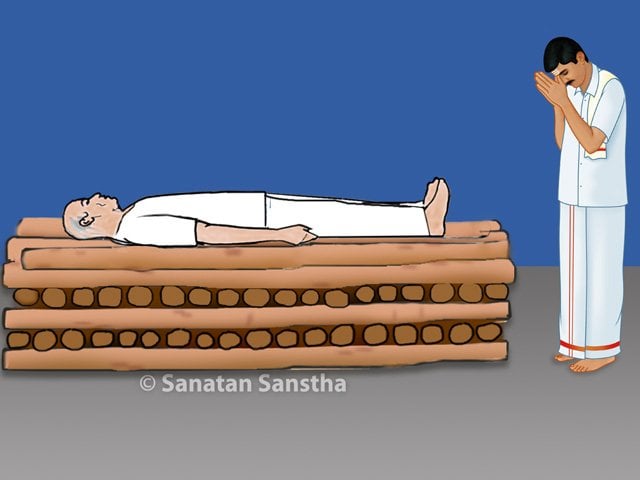 Why is a dead body placed in the north-south direction?

Death signifies cessation of activities of the five vital energies in the body and other sub-vital energies related to the gross body. When a jiva (Embodied soul) loses a life, the transmission of various waves within the body comes to a standstill. In this state, the release of subtle putrefying gases in the body is on the rise. When the dead body is placed in the north-south direction, the Yama waves that move in that direction are attracted to the corpse. These Yama waves form a sheath around the corpse, which facilitates quick disintegration of the subtle putrefying gases within.

After a person dies, while the dead body is placed
in the house why should the feet be towards the south?

The putrefying waves emitting from the dead body are attracted more towards the southern direction. To facilitate the emission of putrefying gases from the dead body, the feet of the deceased are placed in a way that they are towards the direction conducive for it, which is south. The abode of Deity Yama is in the south direction and hence, in order to direct the flow of these gases precisely in the direction of Deity Yama, it is a custom to keep the dead body while it is still in the house, with its feet facing the south. As emission of the gases occurs to a maximum extent due to this action, the dead body becomes maximally empty before it is put on the pyre.

Why is Gangajal poured into the mouth
of a deceased followed by placing basil leaves in the mouth?

Why is a bunch of basil leaves placed
in the nostrils and ears of the dead body?

Whenever there is a death in the family, why is an
earthen lamp lit in the house and what should be its direction?

When the vital energy leaves the physical body, sub-vital energies and other subtle putrefying gases are released into the environment and the person gets confined to that place with the physical body becoming lifeless. As a result, the Raja-Tama-predominant waves associated with the sheath of the desire of the deceased, move rapidly in a circular manner at the place of his death. There is every likelihood that any jivas entering the area encircled by these waves will suffer distress. To prevent this, an earthen lamp is lit on the precise spot. The flame of this lamp is kept facing the south, since that is the direction of abode of the Deity of death, Yama.

Why is a lit earthen lamp placed
on wheat flour kneaded with water?

Due to the wheat flour mound, the Tej-tattva (Absolute Fire Principle)-predominant waves attracted to the flame are held for a longer period and then they are gradually emitted far and wide as per the need. This, in turn, helps in reducing the obstruction of negative energies from the hell region and in the disintegration of Raja-Tama-predominant waves.

Why is only one wick used in the earthen lamp?

Once a person dies, his body, which is made up of the five Cosmic Principles, becomes lifeless; then it is only the soul that glows. A single wick used in the earthen lamp is a symbol of the glow of the soul. 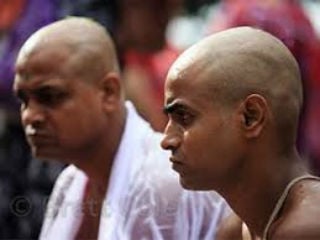 When a family member passes away, the environment in the house becomes RajaTama -predominant. The linga-deha (Subtle-body) of the deceased keeps wandering around the house or around the family members for some time. Raja-Tama-predominant waves emitting from the linga-deha of the deceased get attracted to the black color of the hair of the family members. Absorption of such waves can result in distress such as severe headache, numbness of head, feeling of uneasiness, etc. to the family members. Men who actively participate in the final rites have higher chances of suffering from such distress. To avoid this suffering, they must shave off their heads completely. Hindu Dharma considers the woman to be a symbol of the unmanifest Shakti (Divine Energy) of Adishakti (Primal Energy). Having long hair is a symbol of modesty and therefore, cutting of hair by women is an anti-Dharmik act. The energy-oriented Sattva-Raja waves transmitted by the tips of the hair, in a way, protect a woman from negative energy attacks.

Why is the dead body bathed and then dressed in new clothes?

The dead body is bathed accompanying loud chanting of ‘Srī Gurdēv Datta’. Bathing a dead body with water charged with sattvik waves destroys the sheath of Raja-Tama particles on the dead body, so also it helps in releasing the subtle putrefying gases trapped in the body. Thus, bathing the deceased amounts to purifying him/her externally and internally. After the bath, the deceased should be dressed in new clothes. Through the medium of these new clothes, a protective sheath is formed around the deceased.