Why is the dead body placed on a
pyre so that the feet are towards the north? 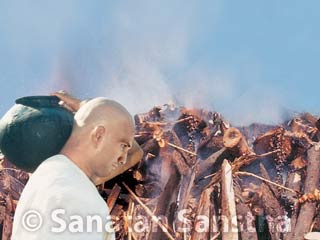 What is the science underlying consigning the dead body to the flames?

Fire is related to Tej-tattva. Chanting of the mantras generates sound energy (Sound is related to Akashtattva [Absolute Ether Principle]), on the strength of which waves emitting from the fire gain greater momentum. The combined waves that are generated as a result of the union of Tej-tattva with Akashtattva creates a subtle impenetrable sheath around the dead body. This sheath helps protect the linga-deha (now wandering in the atmosphere) from negative energies. Combined waves (as explained above) generate subtle heat due to which the linga-deha is able to break the barrier of the atmospheric sheath of the earth region and move into other regions in a very short time.

After cremation of the
body on the funeral pyre, why should
the performer of the rites circumambulate the
pyre thrice holding a pitcher containing water on the
shoulder and letting water flow from it while circumambulating?

What is the Importance of breaking the pitcher?

After lighting the funeral pyre, the maximum amount of impure gases is emitted by the dead body and they get disintegrated in the fire itself. The subtle Shakti of Tej (that is generated from chanting the mantras) activates the fire in the pyre and compels it to disintegrate the subtle impure gases in the body. As the pitcher symbolizes the dead body, the sound of its breaking helps in ending the account related to death rites between the dead body and the person who is performing his last rites.