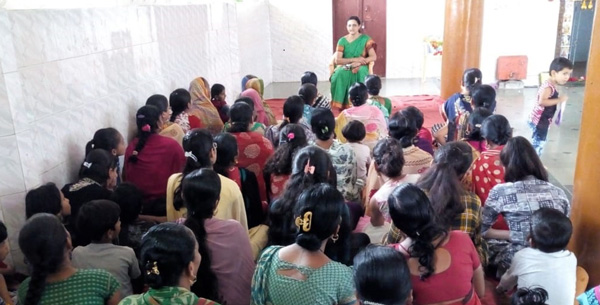 Shiroli (Kolhapur District) – Hindu women and girls have given up the glorious Hindu culture and adopted Western culture, the freedom that they have got has evolved into promiscuity. Hence the calamity of ‘Love Jihad’ is haunting the homes of Hindus. During her discourse on ‘Importance of Hindu culture and the growing threat of Love Jihad’ held at Mhasoba temple on July 28, 2019 at Shiroli, Dr. (Mrs.) Shilpa Kothwale stated that due to lack of religious education Hindu girls are falling prey to ‘Love Jihad’. 65 young women and girls attended it. The same discourse was delivered at Malbhag to 25 women in the presence of social worker Mrs. Ashwini Agale. This was organised by Bajrang Dal representative Mr. Prashant Kagale.

Dr. (Mrs.) Shilpa Kothawale further said, “Atrocities against women are growing day-by-day. Every day there is at least one news item on atrocities against women. So to sum it, for women in the country life is insecure. ‘Love Jihad’ is the campaign launched to trap Hindu girls and women in a web of false love. Even highly educated and married women are falling prey to this. The life of such women is then ruined. To prevent this from happening, from childhood Hindu girls should be imparted religious education through values of the Hindu Dharma. They have to be aware of the radiant history of brave Hindu women.”