‘Dr. R. G. Bhandarkar says that the word Vishnu from Sanskrut got distorted in Kannada language to Bitti and it is from this distortion that the word ‘Vitthal’ has been derived.’

3. The other name of ‘Vitthal’ : Pandurang
Dr. R. G. Bhandarkar says ‘Pandurang is the name of the fair complexioned Shiva. This form of His in Kannada was Pandarange. Hence ‘Pandharpur’ means the town of ‘Pandarang’ or ‘Pandurang’.

A. Reasons for referring to the idol of Shri Vitthal
as Pandurang (fair complexioned) despite it being black in colour.

A1. Vitthal became white coloured after being consecrated (abhishek)
with curd and milk and so He has been named as Pandurang.

‘Shri Vitthal is My incarnation. Hence, I have assumed the form of Shri Vitthal by being smeared with curd and milk. Though the Scriptures (Shastras and Purans) state that the complexion of Shri Vitthal is dusky, but after being consecrated ( with curd and milk) it has become fair endowing Him with the name of Pandurang.’ – Shrikrushna (Divine knowledge received through the medium of Mrs. Prarthana Datta Buva formerly Miss Megha Nakate, 15.7.2005, 7.35 p.m.)

A2. Though the idol of Shri Vitthal appears dark complexioned,
a true devotee through his subtle sense organs sees Him as fair complexioned.

Though the idol of Shri Vitthal appears dark complexioned, a true devotee through his subtle sense organs sees Him as fair complexioned.Every month, out of the two ekadashis (eleventh day in each fortnight of the Hindu lunar calendar) the first one is dedicated to Shri Vitthal and the second to Shri Pandurang.
History

B. Remaining in standing pose for twenty-eight yugs (eras)

1. Four yugs namely Satya, Treta, Dwapar and Kali complete one cycle. Presently the seventh cycle of the Earth Principle is in progress, 7×4 = 28. So currently it is the 28th yug and Deity Vitthal has been standing continuously for twenty-eight yugs.

Reference : Sanata’s holy text ‘Shri Vitthal’ (Upasanashastra [the science of worship] and the greatness of Pandharpur)’

The Shri Vitthal idol from Pandhari too experienced the state of exile !

King Ramaraya of the Vijaynagar empire in the South of Bharat took the idol of Shri Vitthal from Pandharpur to Vijaynagar in the middle of the 16th century and installed it in a huge temple built there.

3. Reinstallation of the idol in Pandharpur

The great grandfather of Saint Eknath, Bhanudas Maharaj brought the idol back from Vijaynagar and amidst celebration reinstalled it in its original place.

4. Shifting the idol to a secret destination to protect it from the Muslim invaders

The Muslims began to gain hold in South Bharat. To prevent the idol of Shri Vitthal from being captured by these muslim invaders; in 1669 A.D. it was moved from Pandharpur and kept at a secret destination. Later in 1672 A.D. during the Ashadhi vari (procession of devotees) the idol had to be taken to the village of Kadkusumbe. since the idol was kept hidden the invaders could not find it.

5.The idol remained outside the temple for a long period

The idol was stolen in 1675 A.D. However the thieves returned itto the Badwas (traders) in exchange for a huge sum of money. From 1694 to 1715 for a long period the idol was kept in secrecy in a place on the outskirts of Pandharpur.

In 1715 the idol was reinstated in the temple at Pandharpur. Within a year Rajarshi Shahu Maharaj through a letter extended his protection to the idol and promised that the army would not harass the area of Pandharpur. Ever since, Shri Vitthal idol did not have to experience exile again.’

Why is bukka (a fragrant black powder) applied,
instead of kumkum (vermilion) to Shri Vitthal ?

Kumkum symbolises the actual active Primal Energy (Adishakti). Since Shri Vitthal is an icon of detachment, that is the observer state (sakshibhav), bukka is applied to Him. Assessing every action based on the principle of akarma-karma (non-action action), and endowing each component of that action with energy of the nature of cause and effect and taking it beyond body consciousness, that means taking it beyond the Shiva Principle (or beyond Purush and Prakruti) is the principle behind applying the bukka. Shri Vitthal Himself not being directly active, He signifies action. Vitthal is the name of principle which, with the help of the manifest form (Sagun) aims for nirgun by being steady towards this target and by being delightfully engrossed in sakshibhav (observer stance). The state of sakshibhav can be achieved only by sacrificing the attachment with the great illusion (maya) and by getting engrossed in the nirgun (non-material) that is in the spiritual emotion of detachment. By application of bukka the sakshibhav (observer stance) form frequencies of detachment which are dormant in the Adnya Chakra of the idol of Shri Vitthal get activated. These in turn activate the dormant energy of action (kriyashakti) in the Anahat chakra of the embodied soul and endows it with the strength to see Brahma (God Principle) in the Great Illusion and thus separates it from the latter.

Some prayers to be offered to Shri Vitthal 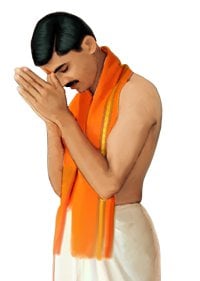 1.O Vitthal, you long fordevotion. Please teach me how to be devoted unto you with intense yearning. This is my earnest prayer at Your Holy feet !

2. O Vitthal, protecting Dharma is the worship which is the need of the hour. Please endow me with devotion and strength for the same, is my earnest prayer at Your Holy feet !

Sounds of the cymbals and mridang (drum)

Sounds of the cymbals and mridang (drum) activate the orbits of nine celestial planets, constellations and the stars around the idol of Shri Vitthal and in turn their blessings bring about redemption of the devotees.

Ensure that Shri Vitthal is not dishonoured

1. Do not throw the picture of Vitthal on the packet of prasad (devotional offering of food to a Deity) on the road !

2. Do not throw used packets of incense sticks, sweetmeats etc. having pictures of the Deity on it in the dustbin.

3. If such pictures are found on the road then collect them in the box kept for that.

4. We will ensure that they are immersed appropriately.

5. Both, denigrating Deities and allowing others to do it is a great sin.

Vedas
The most sacred Hindu scriptures, revealed directly by God
Tulsi
Holy basil plant
Prasad
Offering made to God and then distributed to devotees
Karma
An act that becomes destiny, meaning, leads to a give and take account that has to be settled
Dharma
Righteousness
Arti
A ritual of waving a lit lamp in front of a Deity, accompanied by singing of hymns
Akarma-karma
Non-act; act in which doership is dispelled
Abhishek
Consecration of Deities by ritualistic bathing with water, milk etc