Appeal by Sanatan Sanstha to ‘Aakhada Parishad’ and spiritual organizations ! 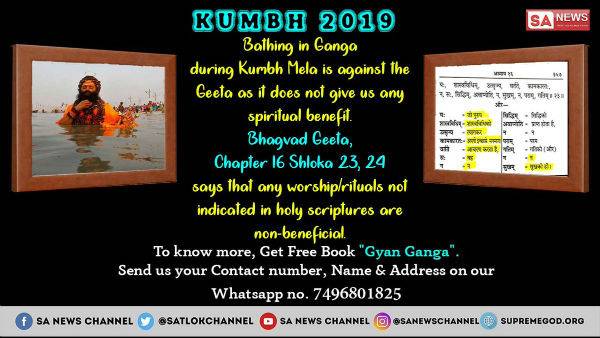 Prayagraj (Kumbhnagari) : All Hindus following Sanatan Dharma consider having bath in River Ganga as a deed of merit. Millions of devotees have holy dip on the occasion of ‘Kumbh Mela’ and cleanse them off their sins. With the help of non-Indians, however, confusion is being created by few anti-Hindus, against such faiths. Propaganda is made using ‘hash tag’ of ‘#kumbhsnan_blindfaith’ since last two days on Twitter that ‘Kumbh-snan’ is against teachings of Bhagavat Geeta; superstition creates problems for devotees’ etc. Anti-Hindu powers have hatched a conspiracy to divide Hindus by creating confusion about ‘Ganga-snan’. Shri. Chetan Rajhans, the National Spokesperson of Sanatan Sanstha has therefore, made an appeal to ‘Aakhadaa Parishad’, spiritual and pro-Hindu organizations through a circular, to stop this false propaganda against ‘Ganga-snan’ and foil the conspiracy hatched by anti-Hindus.

Shri. Chetan Rajhans has stated in this circular that,

1. ‘Ganga-snan’ during ‘Kumbh Parva’ is approved by ‘Dharmashastra’. Bhagavan Shrikrushna says in Geeta, “I am Ganga amongst all rivers.”

2. ‘Ganga-snan’ is therefore, holy. Hindus, who are creating confusion by distorting sayings in Geeta, are anti-Hindu Dharma. It has been stated in ‘Skanda-Purana’ that ‘Having bath in Ganga during ‘Kumbh-Parva’ is most meritorious.’

3. Millions of people having faith in ‘Vedas and Puranas’ have bath in River Ganga. Books like ‘Dnyan-Ganga’ and ‘Andhashraddha Bhakti Khatara-e-jaan’ are being publicized which are playing with religious sentiments of devotees.

4. Uttar Pradesh’s popular Chief Minister Yogi Adityanath should take immediate action against such books and create assurance amongst Hindus, was also appeal made by Shri. Rajhans.

5. We can realize from the very name ‘Andhashraddha Bhakti Khatara-e-jaan’ that it is an attack by secular powers. We make an appeal to ‘Akhil Bharatiya Aakhadaa Parishad’ that such powers should not be allowed to enter ‘Kumbh Kshetra’