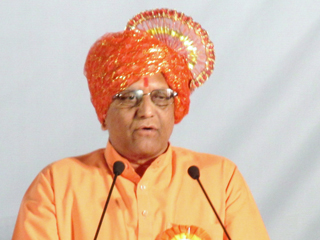 Jalgaon – Navaratra festivities are a blend of devotion and Divine energy (Shakti). As per Scriptures on this day we perform the ritual of simolanghan (meaning crossing the territory in the north-east direction after stopping at a Shami tree) trespass the border of unrighteousness. On this Vijayadashmi let us all pledge to establish a righteous and radiant Hindu Nation liberating us from unrighteousness and darkness, is what Sadguru Nandakumar Jadhav of Sanatan Sanstha appealed when speaking at the Hindu Dharmajagruti Sabha organised by Hindu Janajagruti Samiti at Mitawali (Chopda Taluka), to celebrate Navaratra. Mr. Prashant Juwekar, the District Co-ordinator for the Samiti Mr. Prashant Juwekar too addressed the audience. The programme was compered by Mr. Shreyas Pisolkar from the Samiti.

The Sabha commenced with blowing of the conch. This was followed by lighting of the oil lamp by Sadguru Nandakumar Jadhav and garlanding of the statue of Chatrapati Shivaji Maharaj by Mr. Prashant Juwekar. Considering that this was the first programme of this kind in this village according to some villagers who opined after the Sabha it was excellent. 260 out of a village population of 1100 attended this Sabha.

If the 70 year old history of the country is studied then it will show how the main Hindu cultural seats, places of worship etc have been attacked to a great extent. So let us contemplate today on what kind of Bharat we wish to give the next generation. As the generation of Shivaraya fought these forces 400 years today we can live with pride as ‘Hindus’. So if we wish that our future generation should live as proud Hindus then we will have to establish a Hindu nation and now is the time to devote ourselves fully towards this cause.

Highlights of the event

The annual Shourya Jagran camp (meant to awaken the bravery within the self) was organised by Hindu Janajagruti Samiti at Mitawali as part of the Hindu Rashtra  Jagruti Abhiyan after which regular self-defence training camps commenced here. Dhiraj Patil, Kunal Patil, Ravindra Sonawane, Bharat Sonawane, Nivrutti Ingle, Satish Ingle, Gajanan Patil, Manoj Patil, Vinod Sonawane etc are devout Hindus from these camps who made all preparations for the Sabha and experienced how successful the event was due to support from God.