There are times when we have been invited to a felicitation ceremony of someone important at the materialistic level. However, according to the Hindu Dharma, an individual engrossed in the task of spiritual upliftment of others, that is, the one engrossed in selflessly working for social cause is truly eligible for felicitation. Let us find out from this article as to how can one spiritually benefit from felicitating such an individual and Saints.

In Hindu Dharma, felicitation of every visitor (For example a soubhagyawati [Married woman]) and a deserving send-off, meaning one with a bhav (Spiritual emotion) of gratitude and using articles enriched with Chaitanya (Divine consciousness) as gifts, is always beneficial. Each act performed in this manner helps us benefit spiritually, since it is an aspect of spiritual practice performed with bhav.

3. Who should be felicitated? 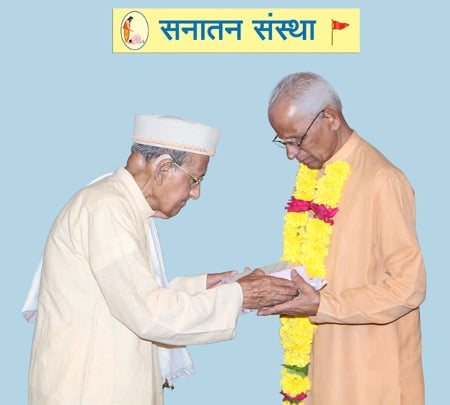 In day-to-day usage, the term satkar means felicitation. However, the spiritual meaning of the word satkar is, ‘an individual who is instrumental in propagating the mission of Sat (Absolute Truth)’. According to the Hindu Dharma, an individual engrossed in the task of spiritual upliftment of others, that is, the one engrossed in selflessly working for social cause is truly eligible for felicitation.

4. Who should do the felicitation?

The individual doing the felicitation should have a spiritual level of more than 40% and bhav for God. When such an individual having bhav for God does the felicitation, it helps in attracting the activated Divine waves from the Universe to the venue. In addition, since the Principle of the Deity gets activated for the sake of the society in a shorter period, those present there benefit from Chaitanya of the Divine Principle.

A. Sanskrit shloka to be recited during the felicitation

B. Steps in the process of felicitation

1. First apply kumkum (Saffron) to the forehead of the individual being felicitated.
Spiritual science: Application of kumkum denotes worshipping the Divine Principle in the individual.

2. Then, garland the individual.

4. Then, pay obeisance to the individual with a bhav that we are surrendering unto the divinity in him.
Note: The method of felicitating both, a man and a woman is the same as given above. When felicitating a kumarika (A virgin), she is offered a gift; whereas, a married woman, a form of Adi-shakti (Primal energy), is offered oti (A blouse piece, a coconut and a sari).

Irrespective of the gender, a Saint is honored in the same way. An individual assuming the status of a Guru and having a low ego is also very dear to God. Such an individual is most eligible for reverence by the entire human race. Hence, it is incorrect to use the word ‘felicitation’ in connection with Saints. The appropriate term would be ‘honour’.

A. Padyapuja (Worship of the Holy feet) 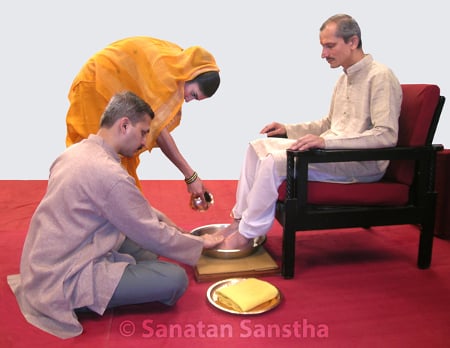 Begin honouring a Saint with ritualistic worship of His Holy feet.

Spiritual science: With worship of the Holy feet of a Saint, the Nirgun (Non-materialised) Divine waves in the environment around the Saint are awakened and activated.

1. Washing the Holy feet of the Saint with lukewarm water

Spiritual science: When the Holy feet of a Saint are washed with lukewarm water, the Nirgun Chaitanya in Him manifests. These waves of Chaitanya help in driving out the distressing vibrations in the environment. Since the feel of the united Tarak-Marak (Saviour-Destroyer) waves of the Sagun form of God active in the atmosphere is warm, symbolically, the water used should be lukewarm. The combined waves of Tarak-Marak tattvas (Principles) act at both the levels as per the need of the individual. The less the ego of the individual while washing the feet of the Saint with lukewarm water, the more the Nirgun Principle functions for the individual through the medium of the Saint.

2 Washing the Holy feet with milk

Spiritual science : The flow of Sagun Chaitanya in milk helps activate the Kriya-shakti (Energy of action) in a Saint. This curtails the movement of negative energies at the venue and creates a protective sheath around the premises.

Spiritual science: This bestows the awakened Kriya-shakti in a Saint with God’s Nirgun energy, thus, kindling the atma-shakti (Energy of the soul) in the Saint.

4. Drawing a swastik (An auspicious mark, which represents the Principle of Divine Energy in the form of Shri Lakshmi) with sandalwood paste on the Holy feet

Spiritual science: Drawing a swastik on the Holy feet of the Saint awakens the Adi-shakti Principle in Him. Consequently, since the task is assisted by both, the Shiv (God) Principle and Shakti Principle, the mission gains momentum.

5. Application of kumkum as a dot at the centre of the Swastik

Spiritual science: By applying kumkum, a flow of activated Shakti of Shri Durgadevi is attracted towards it and gets concentrated in the centre of the Swastik, and functions as per the need of the samashti (Society).

6. Offering flowers at the Holy feet of a Saint

Then, apply tilak (A vertical mark made on the forehead with substances such as kumkum) to the forehead of the Saint, garland Him, perform aukshan (Ritual of waving a lit lamp in front of a Saint or an individual), and then offering a shawl and a coconut, do sashtang Namaskar (Obeisance by prostrating) at His Holy feet.

Note: The method of honouring both male and female Saints, is the same as mentioned above.

C. Why are a shawl and coconut offered to a Saint,

whereas a gift is offered to an average individual during felicitation? 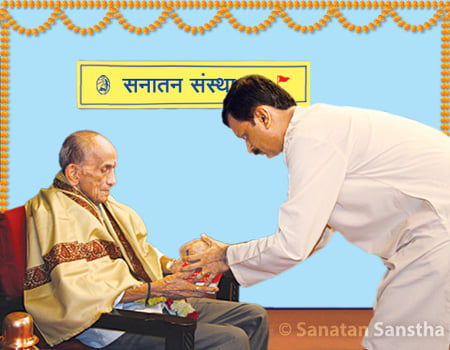 1. Offering a shawl and a coconut

Offering a shawl and coconut instead of some other gift is spiritually more appropriate and more sattvik. A coconut is a symbol of auspicious action. A coconut attracts waves emitting from the body of a Saint and then emits them into the environment. Offering clothes is the final ritual in ritualistic worship. Wrapping a shawl around the shoulders of a Saint amounts to giving a definite form to the Divine Principle activated in the Saint and praying unto it to manifest and help in the mission. Offering a shawl and coconut is a means of honouring the Divine Principle present in a Saint.

From the worldly perspective, presenting gifts signifies honouring an individual deserving of a felicitation. The need to present a gift to a Saint does not arise, since He works relentlessly and selflessly towards spiritual upliftment of the society. Another objective in presenting a gift to an average individual is to encourage his mission. – A Scholar (Through the medium of Mrs Anjali Gadgil, 19.1.2005)

7. What should be avoided during felicitation?

1. As far as possible, avoid wearing western outfits, for example shirt-pant. Instead, wear a Bharatiya dress such as a kurta-pyjama.
2. Never wear footwear during felicitation, since it amounts to insulting the divinity in the revered individual

8. Comparison of felicitation of a

deserving individual, a Saint and an Idol of a Deity