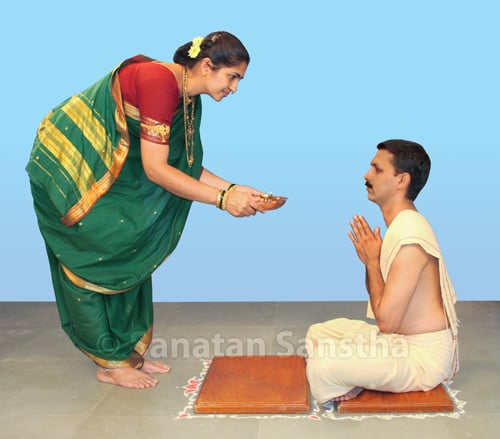 Aukshan denotes welcoming the moment of arrival of the Divine waves on earth from the Universe that are activated by the flame of the lamp and by identifying that moment, surrendering unto those waves at that very instant.

A. Development of a protective sheath

While performing Aukshan, a moving protective sheath of waves that are emitted and imbibed with the help of the lit lamp is formed around the body of the individual.

B. Helps in obtaining blessings of the Deity

Due to the bhav (Spiritual emotion) unto the Deity thus awakened, blessings of the Deities become functional through the active Divine waves. When performing the ritual, a prayer made by the individual for its spiritual progress with an attitude of complete surrender helps it in getting the expected results and availing in true sense the objective of performing the karma (act) of aukshan, which in other words, is getting the blessings of the Deities through the medium of aukshan. – A Scholar (Through the medium of Mrs Anjali Gadgil, 27.1.2005)

3. On who is aukshan performed?

A small child, a virtuous individual, an invitee, a soldier leaving for the battlefield, a king and a Saint. Below are reasons underlying the various methods of aukshan and the effect on an individual.

Reasons of performing aukshan for different types of individuals

Generally, the individual is made to sit in front of the Deity at home while performing aukshan. During specific occasions (For example, a thread ceremony, marriage), it is performed at the venue of the ceremony.

A. Why is aukshan performed inside the house
and not while standing at the threshold of the door? 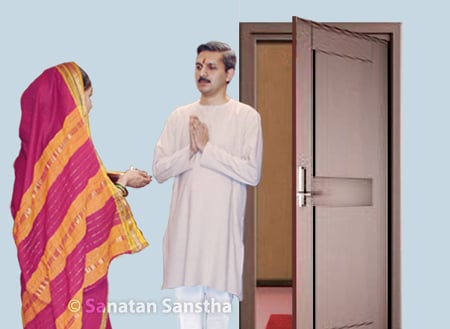 The threshold of the door is a good medium of imbibing distressing waves emanating from the Patal (Hell region) and dissipating them back into Patal. These distressing waves congregate in the door-frame. When standing at the door, the individual is distressed due to the area which is laden with Raja-Tama. predominant waves. These waves create a sheath around the individual. This in turn, affects the mental sheath of the individual and increases the dominance of the Raja-Tama components in it, thereby increasing the irritation of the individual. Hence, aukshan performed at the threshold of the door is not acceptable in Hindu Dharma. Instead of the threshold of the door, aukshan should be performed on the inner side of the door, meaning inside the house, and if possible next to the temple at home. Draw a Swastik (An auspicious mark) symbol on the ground with rangoli (White crushed powder used for making designs on the floor), place a wooden seat over it for the individual to sit and then perform aukshan. When this is combined with bhav of the individual, it activates the Chaitanya (Divine consciousness) of the Deity in the environment, helps the individual in obtaining the expected benefit and getting the Deity’s blessings in the form of strength required for the mission ahead. – A Scholar (Through the medium of Mrs Anjali Gadgil, 25.1.2005)

Harmful effects of performing aukshan at the entrance 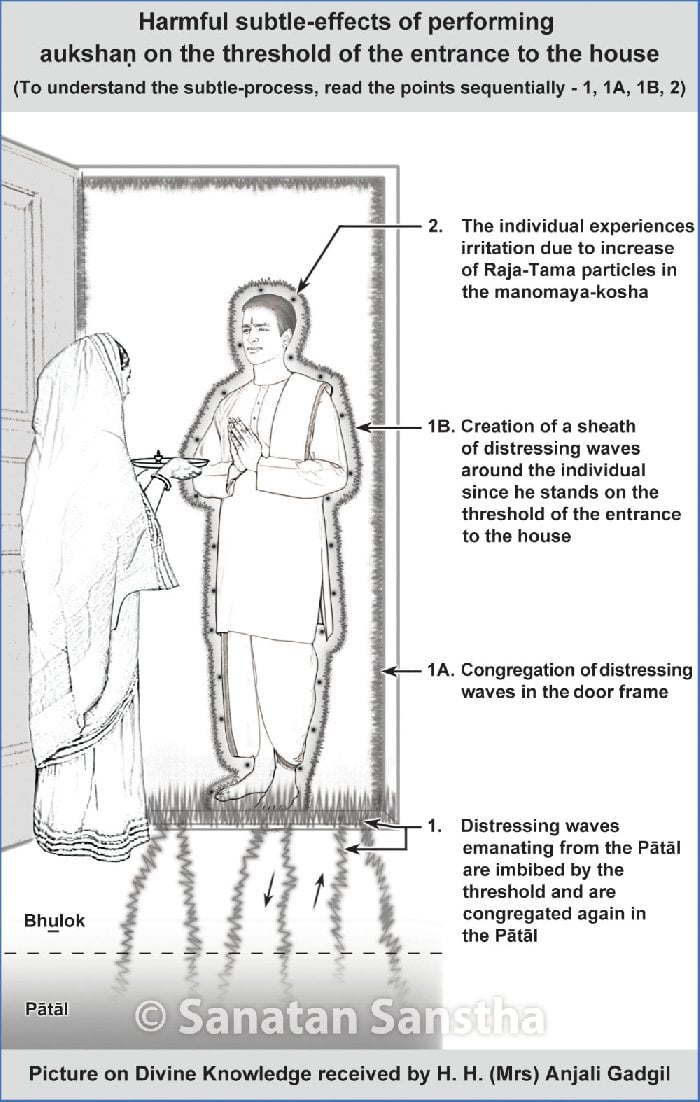