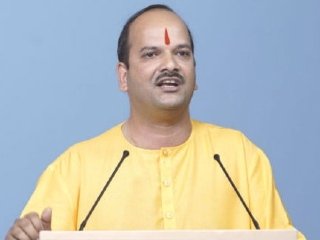 New Delhi – At a program organized at the Shri Radhakrishna temple here by Mr. Sumeet Sharma, Sanatan Sanstha Dharmapracharak Mr. Abhay Vartak said that Paratpar Guru (Dr.) Athavale is world-famous in the field of medicine. However, realizing that Spirituality is superior to the modern sciences He has established the Sanatan Sanstha to propagate Spirituality. He has also proven its greatness by researching it using scientific equipment. As a result, foreigners are getting attracted to study Spirituality. If we Hindus do not study our Dharma now then tomorrow we will have to learn it from foreigners. So from now itself each one should study Dharma and commence spiritual practice. Scholar in Spirituality Dr.Pravesh, Supreme Court Advocate and protector of cows Mr. Amitesh Chaube, Chairman of the Shri Gopal Gorakshan Dal Mrs. Shanti Sharma, Mahant Ramkishen Sharma, etc were present during this guidance. A Bhandara (food festival) was arranged after the program.

In his address, Mr. Sumeet Sharma stated that the Manusmruti is being opposed to baselessly, without its study. Of all the Smrutis the Parashar Smruti is considered to be supreme for the Kaliyug. Only if the basic Manusmruti is studied then the common man will understand its greatness. Hindus have always accepted bad practices and stopped them with the flow of time but what is happening today is absolutely wrong as the Hindu Dharma is being opposed unreasonably. The cow is the ‘Mother of the nation’ and referring to her as the national animal is an insult to her.

Kaliyug
Era of strife (The present era, amongst the four eras)
Dharma
Righteousness
Bhandara
Distributing food during a religious festival