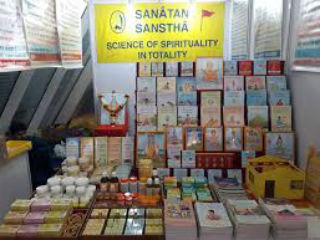 Bhagyanagar (Telangana) – As usual at the 33rd Hyderabad Book Fair held at Bhagyanagar and the 31st Vijaywada Book Fair held at Andhra Pradesh, Sanatan Sanstha had set up its stall of Holy texts and sattvik products, which received an excellent response from spiritual aspirants. This book fair had 350 stalls which were visited daily by thousands. Sanatan Sanstha Holy texts in Telugu, Hindi and English were on display along with its sattvik products. Flex boards imparting Dharmashikshan (religious education) and information on Sanatan Sanstha’s Holy texts were also put up. These were read by thousands of spiritual aspirants leading to a good sale of Holy texts.

In Bhagyanagar and also at the book fair pamphlets educating on why New Year should not be celebrated as in the West, were distributed.