Karma (An act or action which gives rise to destiny) that we do according to our intellect or will is called the kriyaman-karma. Day-to-day and occasional karma performed by an individual is called ‘kriyaman-karma’. Of the total karmas that the human beings perform, 35% are done because of kriyaman-karma. Of the entire kriyaman-karma, 90% of the karma is done to fulfill his own desire, while only 10% is done out of parechha (Others’ wish). Kriyaman-karma falls within the domain of human intelligence. Therefore, performing it correctly or otherwise solely depends on the reflex action originating from the subconscious impressions in the mind of the individual. Since kriyaman-karma is associated with Dnyan-shakti (Energy of Knowledge), it is said that if it is done in an appropriate manner, one can overcome prarabdha-karma. Therefore, kriyaman-karma carries immense importance. That is the reason why Saints insist on excellence in kriyaman-karma. 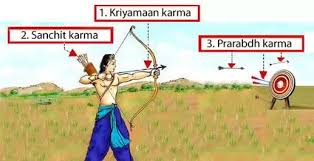 1. Without activity, nothing can be achieved

Meaning : Destiny may provide a meal during the meal hours, yet without the movement of the hands, the food will not enter the mouth.

B. Is it not possible to live by swallowing merely air without eating food ? If it is possible then why make the effort ? This statement is also not correct; because, even if an individual survives for some time without food and water, he still has to continue to breathe. Without breathing, it is impossible for man to survive. Procuring food, eating, and living are acts achieved through effort; hence, man should always keep trying.

Meaning : If a seed is planted without first preparing the field, the seed is wasted. Similarly, without activity, only through destiny, a task cannot be accomplished.

Meaning : Always keep trying, so that, by chance, you will succeed.

Meaning : Pre-planned tasks (of human beings) are completed through hard work alone, and not merely by desires. Deer do not (automatically) come and fall into the mouth of a sleeping lion. (For this, the lion has to make an effort)

Meaning : (Sage Vasishtha says to Srīram) ‘If destiny alone is going to do everything in this world, what is the use of man doing any work ? Destiny will do all the work like bathing, donating, sitting, talking.’

3. Whoever considers only destiny to be superior, perishes

Meaning : Destiny is the creation of fools out of their own imagination. Whoever considered it superior has perished.

Meaning : There is no doubt that the believer of destiny gets completely ruined quickly.

4. Deities too earned superiority through effort

Meaning : Deities too got the Amrut (Divine nectar) through effort; and through effort alone, they were able to destroy the demons. Indra too was able to rule over this and the nether world only through His effort.

Meaning : Without effort, living beings are not eligible to acquire wealth. Only after putting in the effort required for churning the ocean, did the Deities get to drink the Amrut (Nectar).

A. No control over prarabdha

We have no control over prarabdha, yet to put in effort (kriyaman-karma) is our duty.

B. Prarabdha is the result of kriyaman-karma

Prarabdha is the result of kriyaman-karma performed in the previous births in the form of merits and demerits; hence, when compared to prarabdha, kriyaman (effort) is superior.

C. Even if the kriyaman-karma is just 1%, it is
possible to overcome 99% prarabdha with the help of sadhana

D. It is essential to persevere with kriyaman
until the battle between prarabdha and kriyaman is won

When two enemies fight, on some occasions one wins and at other times, the other. In the same way, the destiny and the materialistic efforts battle each other for supremacy. In this battle too naturally, the weaker loses. Till the fruit of karmas of the previous birth is not fully exhausted, man should keep trying.

Karma
An act that becomes destiny, meaning, leads to a give and take account that has to be settled
Kaliyug
Era of strife (The present era, amongst the four eras)