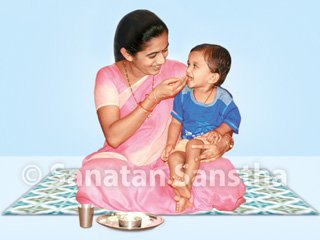 Karma (An act, action which gives rise to destiny) is the essence of human life. Knowing the importance and peculiarities of karma changes our attitude towards karma and we get exposed to a new dimension to perform it. The karma in day-to-day life has to be performed with a sense of duty, unperturbed by the Maya (The Great Illusion) that is its part. Destiny takes its own course; but without getting perturbed by Maya, an individual should continue performing karmas that he comes across in a business-like fashion and with a sense of duty.’ – H.H. Bhaktaraj Maharaj

Performing kartavya-karma does not help acquire merit, but not performing them leads to acquiring of demerit.

A. An honest servitor

Performing any task assigned by the master with dedication.

Considering devotee Pundalik as a role model in obeying his parents’ orders and serving and nursing them.

C. A chaste and dutiful wife

In order to keep the husband happy, performing the household daily chores, serving in-laws, welcoming the visitors, etc. in the best possible manner.

Ensuring the welfare of his subjects, rearing and feeding of subjects in the best possible manner and defending them from enemies.

To render physical service with the emotion that, ‘every task is the worship of God’.

Some examples are mentioned ahead.

A. Shrikrushna, who reprimanded Arjun about his duties
when the latter wanted to avoid the battle with his own relatives and friends !

During the Bharatiya battle, when Arjun wanted to avoid battling his own relatives and friends, Shrikrushna said to him, “To destroy a body indulging in unrighteous and untruthful behavior is not a sin. Pay no heed to the physical body while fulfilling your duty”. (Shrimadbhagwadgeeta)

B. Shivaji Maharaj, who imprisoned his own son to safeguard
Swarajya (Rule of the people of the land), is a dedicated Karmayogi !

Sambhaji Maharaj was Shivaji Maharaj’s eldest son. His mother died while he was still young. Soyarabai, Shivaji Maharaj’s second wife and the mother of Rajaram began to give step-motherly treatment to Sambhaji. When things became intolerable, Sambhaji left home along with his wife Yesubai and began to dwell in Shrungarpur. Shivaji Maharaj was unhappy with the rash behavior of Sambhaji. He even sent Sambhaji to his Guru, Samarth Ramdas Swami; but he escaped from there and joined hands with the Mughals. Sambhaji met Dilerkhan, a Mughal chieftain. He attacked the Bhupal fort in Satara, Maharashtra. Firangoji Narasala was the chief guard of that fort. When he resisted, Sambhaji ordered him to open the gates of the fort. Helpless at not being able to aim a cannon at the prince, Firangoji opened the gates and ran for Shivaji Maharaj’s shelter. The news angered Shivaji Maharaj and he said to Firangoji, “Firangoji, even if Sambhaji happens to be my son, he attacked the fort as an enemy. Had a cannon been fired at him, it would not have saddened me. When it comes to duties, relationships and friendships take a backstage”. Thereafter, Shivaji Maharaj himself set out on the campaign. He defeated Dilerkhan and kept Sambhaji in captivity in Panhalgad. Shivaji Maharaj, who imprisoned his own son to safeguard Swarajya, was a dedicated Karmayogi.

C. Renowned Queen Ahalyabai Holkar got her own son crushed
to death under the feet of an elephant for having committed a crime !

Renowned Queen Ahalyabai Holkar’s son once asked the priests to collect their monetary gifts from a pot. He had planted a scorpion in that pot which bit everyone. When the Queen learned about this, she punished the son by placing him under the feet of an elephant.

Karma
An act that becomes destiny, meaning, leads to a give and take account that has to be settled