Kolhapur – ‘Different organizations are active in assisting flood victims in Kolhapur Disitict in their own way. Seekers from Sanatan Sanstha, volunteers from Hindu Janajagruti Samiti, and devout Hindus contributed towards this in a big way. Thus seekers performing spiritual practice under the guidance of Paratpar Guru (Dr.) Jayant Athavale and devout Hindus helped these victims and placed ideals before society. 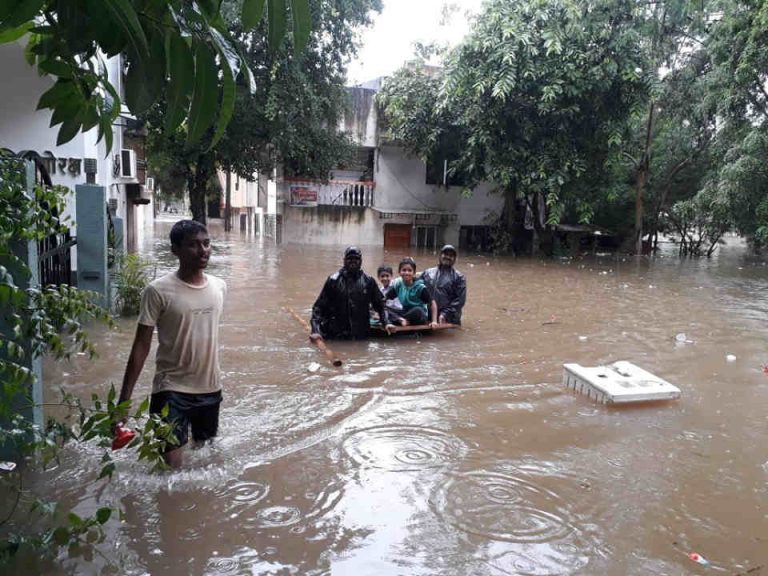 Two devout Hindu women turned to Sanatan Sanstha’s lady seeker Mrs. Surekha Kakde for help as their houses were leaking due to heavy rains. So Mr. and Mrs. Kakde invited them over for dinner and then dropped them to the flood relief camp. After this incident the two wept out of gratitude saying that when no one offered them even a cup of tea the assistance they received from seekers was beyond verbal description.

Mrs. Rupa Patil, Mrs. Ghurke, Mrs. Chaugule from Sanatan Sanstha collected material such as rugs, sweaters and essentials of women and handed over to the relief camps in their areas.

Systematic planning for more than 250 flood
victims at Uchgaon and other parts, by devout Hindus

At Uchgaon and in other parts the Disaster Management Committee accommodated more than 250 victims in different schools and provided them with all meals. Here Uchgaon village panchayat, Bantipremi group, Shivasena, Shri Shivapratishthan Hindusthan and other organisations along with Mr. Shivanand Swami of Hindu Janajagruti Samiti participated.

Flood victims remarked that the
volunteering by devout Hindus was invaluable

On August 9, 2019 Hindu Janajagruti Samiti District Co-ordinator for Kolhapur Mr. Kiran Duse, Mr. Santosh Sangar, Mr. Sagar Hankare, devout Hindus Mr. Sukumar Bhojkar, Kagal Shivasena city chief Mr. Kiran Kulkarni and his son Master Shambhu distributed meals to the flood affected victims. They supplied food packets to 30 victims at a place near Pattankodoli and 40 at Ingali (Hatkanagale taluka). The victims informed that they had not received assistance from anyone, that only the villages on the outside were receiving relief.and thanked for the invaluable assistance.