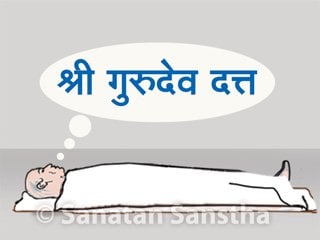 Why is it Important to chant God’s Name at the time of death?

To make human life worthwhile, if a person follows the rules stated in Hindu Dharma and acts accordingly, the life of a jiva (Embodied soul) can become fruitful and even its Mrutyudharma (Life after death) can become blissful, meaning, one that does not lead to Hell. For this, it is necessary to perform continuous sadhana (Spiritual practice), thereby creating an impression of God’s Name on the chitta (Subconscious mind) and going beyond the stage of body-awareness. Merging with Mrutyudharma amounts to overcoming the cycle of birth and death.

What should one do if the end of a
person on the death bed does not come easily?

If a person is on their deathbed, and their end does not come easily, then a donation of salt should be done at his/her hands or casting off the evil eye using salt and bhakari (a type of Indian bread). It is akin to opening the gates of Heaven for the person. Many a time, negative energies are vying to take control of the linga-deha (Subtle-body) of the dying person or they are trying to prove their superiority. Then instead of getting released, the pran (Vital energy) of the dying person gets trapped in the body. This causes a lot of agony to the dying person. Hence, when salt is donated at the hands of a person on their deathbed or casting off the evil eye using salt and bhakari is performed, for a limited period, the control of the negative energies over that person becomes less and the pran of the person leaves the body effortlessly.