Why are the asthi collected on the third day itself after the cremation?

The heat generated due to the fire that is lit while reciting mantras reduces progressively after the third day of cremation. Consequently, the potential of the sheath (created around the ashes) to protect them also reduces proportionately. In this state, negative energies can perform various rituals on the asthi and thereby trouble the linga-deha (Subtle body). These negative energies can also torment relatives of the deceased through the medium of the linga-deha. That is why the asthi are collected on the third day from the Raja-Tama predominant environment of the crematorium.

Why is the ritual of pindadan performed in a temple of
Deity Shiva or an inferior Deity on the banks of a river or a ghat?

As these rituals performed are related to the linga-deha of the deceased, in which the level of subtle humidity is maximum, to facilitate its re-entry into the atmosphere of the earth, the ritual of pindadan is performed on the banks of a river where the humidity is high due to the greater proportion of particles of Apa-tattva (Absolute Water Principle) in the atmosphere. Also, in the premises of the temples of Deity Shiva or an inferior Deity, the Deities exercise control over the negative energies. This helps in protecting the linga-deha from being obstructed during its arrival into the atmosphere of the earth. 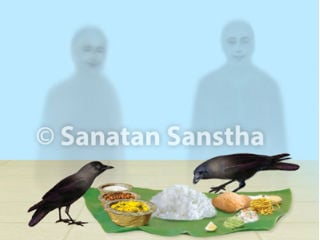 Why is it considered important for a crow
to partake of the offering of the pinda (Cooked rice ball)
during the ritual of pindadan done on the 10th day after death?

Kakgati’ (Kak means crow, gati means momentum) symbolizes the momentum of the linga-deha that enters the atmosphere of the earth for the ritual after being invoked. Linga-dehas that have many desires get entrapped in Bhulok (Earth region), in Martyalok (In the region of the dead), Bhuvalok (Nether region) and Swargalok (The third higher subtle region of the universe). After entering the atmosphere of earth, such linga-dehas enter the body of a crow and partake of the pinda. The pinda located in the center of all other pindas is connected to the linga-deha of the deceased, hence the crow’s partaking of it is considered to be of great significance. The linga-deha gets gratified both at the physical level (by consuming the pinda through the medium of a crow) and at the subtle level (by absorbing the subtle gas liberated from the pinda).

What is the Significance of the rituals to be
performed on the 10th, 12th and 13th day after death?

Tama
One of the three components in the Universe denoting inertia and ignorance
Karma
An act that becomes destiny, meaning, leads to a give and take account that has to be settled