Ayurveda means ‘veda’ of life or science of human life. It gives guidance about how to maintain physical, psychological, social and spiritual well being of an individual. It deliberates about beneficial and detrimental diet, recreation and conduct required for living a life. It also tells about the aim of human life and what real happiness is in a human life. Also, it includes the causes of various diseases, its signs and symptoms, its treatment and also its preventive measures. It guides us about how to make our overall development and to achieve the final aim of our human birth, get permanent relief from all the sorrows and achieve continuous spiritual experience of everlasting bliss in this birth as well as our future births. In short Ayurveda is a science which gives a complete thought to human life and gives a guidance about how to lead a successful, merit full, long, and healthy life.

1. The importance of Ayurveda
which is a unique gift given by Hindu Dharma

Ayurveda is a science which is day-to-day, eternal, everlasting and continuous.

– meaning there are no limitations to the knowledge of Ayurveda. Continuous growth is the nature of Ayurveda.

– meaning Ayurveda is eternal and being self-proven is everlasting science. Ayurveda means ‘veda’ of life, that is knowledge about life. Those sciences which have useful information about the life and health, are all an integral part of Ayurveda. The sages of yesteryears had a great outlook towards Ayurveda that, ‘each science is an inseparable part of Ayurveda’. According to this approach, homeopathy, acupuncture, allopathy, electropathy, naturopathy, magnetotherapy etc are all integral to Ayurveda, is what we will understand. At the most they can be considered as the branches of Ayurveda. Under this huge tree of Ayurveda, every branch should preserve their specialty and should expand their branch too. To study this humongous Ayurveda, it is important to study its basics principles too.

– meaning Ayurveda says, “there is not even a single substance in this world whose use cannot be made as a medicine”. Ayurveda has described the virtues of medicinal plants as per their effects on the human body, example – ‘Pimpli’ is hot whereas ‘Amla’ is cold. It does not mean that the temperature of ‘Pimpli’ is high and that of ‘Amla’ is low. They are not hot or cold to touch. It means that hot substances increase the rate of metabolism whereas the cold once decrease the rate of metabolism. Hot substances cause vasodilatation whereas the cold substances cause vasoconstriction. Ayurveda has nicely described the effect of sweet, sour, salty, spicy, bitter and astringent foods and substances on the metallic elements and the faeces as well as explains their defects. 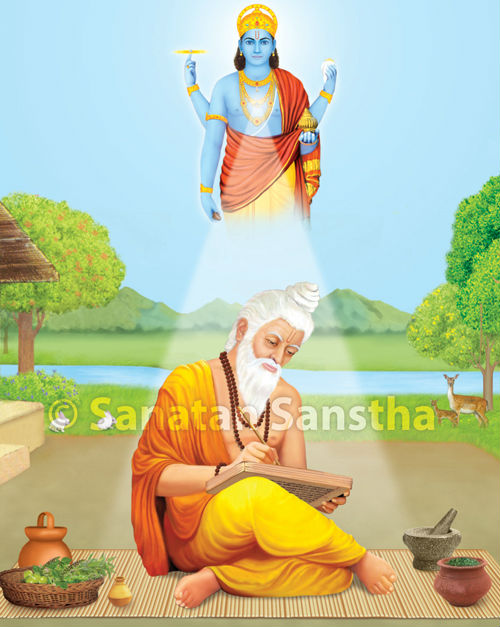 Ayurveda is one of the methods of worship which helps in the spiritual growth of an individual by teaching how to follow ‘yam-niyam’ (the five moral virtues and the five rules) to a person as per the era as well as his temperament. Thus, even if a person is suffering from a disease as per his destiny, if his conduct is as told by Ayurveda, then it becomes easy for that embodied soul to tolerate the distress without having to suffer from the distress of the negative energies and still achieve his spiritual growth.

2. Ayurveda practice is a type of spiritual practice

The highest form of happiness that is bliss can be achieved only by performing spiritual practice. As this truth was known by the ancient sages and saints, they invented various methods and sciences from the point of view of spiritual practice. Ayurveda practice is not an exception to this. Thus, the virtues and merits integral to the general methods of worship are also seen in Ayurveda. The analysis of the same is given below.

2 A. Ayurveda gives guidance as per the era and the temperament

Ayurveda guides an embodied soul to have his conduct and to follow rules of abstinence as per the era and his temperament. Example. Which food stuff should be preferably eaten in a particular season and in how much proportion? What precautions should be taken in old age? Etc. In this way as an embodied soul acts as per the era and the temperament, he receives the necessary energy and his spiritual practice is not used up to cure the physical, mental and other diseases and instead is utilised for the growth of his spiritual practice.

2 B. Practicing the ‘yam-niyam’ (the five moral virtues
and the five rules) in Ayurveda help in the dissolution of the mind

2 C. Along with the physical illness it helps in
the reduction of psychological and spiritual distress too

The doctors in the ancient times were able enough to understand the root cause of a disease. Hence, they used to give the embodied soul medicines charged with various mantras which helped in reducing his psychological and spiritual distress along with his physical illness. Similarly, Ayurveda also gives guidance about not doing the acts which may cause distress to the mind. Example. In which season physical relations to be maintained and in which season they should not be done? Etc. in short due to ayurvedic treatment along with the physical illness, psychological as well as spiritual distress is also reduced.

2 D. Gives guidance about the spiritual practice
which helps in increasing the deficient principles within the body

Various paths of God realization give guidance about various ways of spiritual practice by making us achieve the necessary principles so as to be in union with God. Ayurveda also acts similarly. The five cosmic principles are the God’s supreme energy. If there is any change in the equation of these five cosmic principles within an embodied soul, then there is an increase in the ‘kapha’, ‘vaat’ and ‘pitta’ in that individual and he then suffers from various diseases. Ayurveda teaches to maintain the equilibrium of the ‘kapha’, ‘vaat’ and the ‘pitta’ that means helps in increasing the deficient principle from amongst the five cosmic principles within the body. Similarly, from amongst the eight tantra (branches in Ayurveda) in Ayurveda, ‘bhoot-vidya’ is one of the tantra. This tantra includes the disorders caused due to the God and the planets, meaning the disorders caused due to deficiency of the Divine energy and the treatments for the same.

3. The reason behind creation of Ayurveda even
though the root cause of the illnesses is prārabdha.

4. The benefit of ayurvedic
treatment for the diseases caused due destiny

4 A. Ayurvedic treatment does not cause
any harm to the spiritual practice of an embodied soul

4 B. Ayurvedic treatment modality reduces
the attack by negative energies (in subtle) on an embodied soul.

When an embodied soul falls sick, there is increase in the raja-tama components in his body and also his physical, psychological and spiritual capacity to fight negative energies decreases. The negative energies take advantage of this state and attack the embodied soul and take control of his body and keep on causing him distress over the years to come. At the time of death too, the state of the embodied soul has become weak. The current allopathy treatment and the use of medical technology cause further regression of the vital energy of an embodied soul. This in turn increases the generation of various useless gases within the body which decrease the vital energy of the body and cause various obstructions in the ‘Pranshakti’ flow system. This causes difficulty for the subtle body to leave the ‘pran’ (One of the five vital energies involved in the activity of inhalation). Also, the negative energies are able to easily gain control over the subtle body and make it a slave for lakhs of years. Opposite to this the ayurvedic treatment helps in progression of the vitality of an embodied soul. As there is progression of vital energy, its flow remains active in the ‘Pranshakti’ flow system and does not cause any obstructions in the system. Hence at the time of death, on the basis of this vital energy, it becomes easier for the subtle body to leave the gross body and causes protection of the subtle body from the attack of negative energies.

4 C. Ayurvedic treatment causes decrease in the body awareness
of an embodied soul which makes it easier for its further spiritual progress

The present-day modern medicine and the medical technology makes an embodied soul aware of one’s own body. Due to this at the time of death it be it becomes difficult for him to sacrifice his gross body and attachments related to it. Whereas various types of treatment methodologies in Ayurveda like the prayers, mantras (hymns), abstinence etc cause an effect on the mind of the embodied soul such that he remains in communion with God continuously and develops the spiritual emotion that his body and soul are different from each other which in turn helps in reducing his body awareness. Due to this the embodied soul does not remain attached with the gross body at the time of the death.

4 D. Ayurvedic treatment helps in the spiritual progress of an embodied soul

With ayurvedic treatment there is infusion of vital energy even in the diseased part of the body. Thus, even though the physical body is suffering from illness due to destiny, the negative energies are unable to attack and their create in the diseases part of the body. Ayurvedic treatment causes infusion of vital energy in the body in upward or downward direction in the proportion as required. The kundalini chakra become sensitive due to flow of vital energy in the upward direction. Due to this, even when an embodied soul is sick, the effect of the spiritual practice which is being done by him on the related kundalini chakra causes awakening of that particular chakra and thus it is possible for that embodied soul to progress spiritually. Along with this, downward flow of vital energy causes production of various gases which helps the body to carry out its different activities smoothly. In short, ayurvedic treatment helps in the spiritual progress of an embodied soul.

God has given the knowledge of Ayurveda to help the society by giving support at physical, psychological and spiritual levels even while enduring a severe destiny in the form of an illness. And thus, an embodied soul can do spiritual practice even while being sick and thus make spiritual progress.

5. If diseases occur due to destiny, then why is Ayurveda recommended?

‘The root cause of all the diseases is unrighteousness. In the Satyayug, the dharma stood on its four feet namely truth, purity, penance and alms. That time there were no illnesses. In the Tretayug, one of the legs, namely truth became deficient leading to unrighteousness and hence gave rise to disorders. These disorders caused obstacles in the spiritual practice of the sages. To remove this obstacle, so that the sages could do their spiritual practice properly, Sage Bharadwaj learnt Ayurveda from Deity Indra and taught the same to other sages.’ (reference: sutrasthan, chapter 1) Thus, to remove the obstacles in the form of various disorders from the spiritual practice, Ayurveda manifested on the earth.

Destiny has to be endured; but spiritual practice can help in reducing its severity. For this ‘Daiva-vyapashraya Chikitsa’ has been recommended by Ayurveda. ‘Daiva-vyapashraya Chikitsa’ means doing spiritual practice like chanting, following rules of conduct, mantra, atonement, sacrificial fires (yadnya), shanti (serenity) etc.

6. Ayurveda – The one which tells us
the root cause of a disorder and its treatment too !