The one observing Dharma (righteousness) and ruling the kingdom with dedication is none other than Prabhu Shrirama, the Maryada Purushottam (The Supreme Being abiding by all norms applicable to the common man). Ramrajya was a state of affairs in which the life of subjects was full of contentment, there was no crime, corruption, etc. Let us be determined to establish such an ideal state (a Hindu nation). 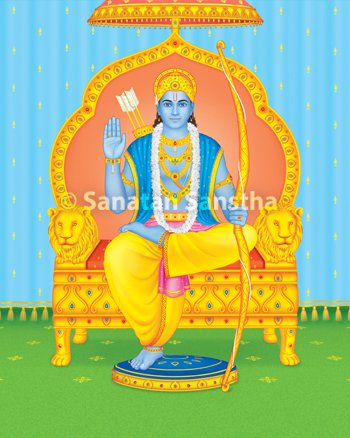 1. Establishing a Hindu nation
dedicated to righteousness is only in your hands!

In Ramrajya, the subjects were abiding by Dharma. That is precisely why they were blessed with a sattvik king such as Shrirama and were able to live in an ideal state of Ramrajya. Similarly, if we too abide by the Dharma and become devotees of God then, a Ramrajya (a Hindu nation dedicated to righteousness) will certainly be established.

2. Such will be the Ramrajya (Hindu nation) from Kaliyug (era of strife)

A. The main objective of the Hindu nation dedicated to righteousness will be the holistic development of  man, society and the nation.

B. In the Hindu nation Dharma will be central focus of law, administration and the social system.

C. All rulers in the Hindu nation will abide by Dharma, morality, selflessness and will love society like a father!