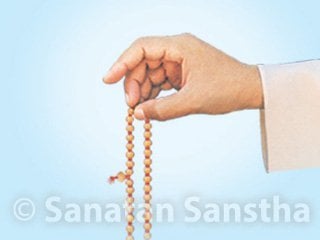 Kochi (Kerala) – The director of the TKP Spiritual Comittee in Calicut, women’s group, Mrs. Snehalata Malpani had organised an online discourse on the ‘Importance of chanting’. Mrs. Shilpa Magdum of Sanatan Sanstha introduced the Sanstha and explained the importance of chanting the Name of the Family Deity and Deity Datta, while Mrs. Sandip Kaur explained the different methods of chanting and details on how to chant with a japamala. Many women benefitted from this discourse. They were also informed about the regular online satsangs conducted by Sanatan Sanstha.

The compering of the programme was done by Dr. (Mrs.) Rupa Maheshwari of the Spiritual Committee. Mrs. Poonam Khatod of the committee welcomed the speakers while Mrs. Manju Khatod introduced them to the audience. Mrs. Snehalata Malpani and Mrs. Nita Chandak proposed a vote of thanks to the speakers and organisers respectively. The programme was concluded by singing the National Anthem.

1. All women expressed that the programme was excellent and all practical points were explained.