Lightning strikes during the monsoons very often. Sometimes, lightning flashes in the sky during other seasons as well. If there is a gap of less than 30 seconds between the lightning and its sound, then such lightning is dangerous. Lightning can lead to great loss of life and property. The precautions to be taken in such a case are given in this article. A. It is mandatory to install ‘Lightning Arrester’ system on every building to ensure that the building is not endangered and no loss of life takes place in case lightning strikes.

B. Wet walls in the house, metal furniture, etc. are conductors of electricity. Moisture from the house can pose a danger if lightning strikes just outside the house. Therefore, the walls of the house should be dehumidified before the monsoons and the house should be repaired under the guidance of construction experts so that the house does not become humid again in future.

C. Since wire is an electrical conductor, wire fencing should not be placed around the house, farm, garden, etc. If such a fence has already been laid, it should be provided with good ‘earthing’ so that it does not lead to any damage.

D. If high tension electric lines are passing over the roads outside your building or house and there are trees nearby, rain or wind can cause the trees to fall on the lines and result in deaths. Therefore, contact the local electricity department and ask them to cut down the tree branches near the power lines.

F. If 2-wheelers or 4-wheelers are parked under electricity poles, power lines and trees, the storm can uproot the poles and trees and damage the vehicles. Therefore, parking of vehicles, driving, etc. should not be carried out there.

H. Power supply may be interrupted indefinitely during monsoons. Therefore, lamps, candles, torches, lanterns, etc. should be kept in the house.

I. Make sure the windows and doors of the house are closed properly. If they do not close properly, they should be repaired.

J. Follow instructions issued from time to time by the administration and the weather department. Those should not be ignored.

2. Precautions required if you are at home when lightning flashes

B. Turn off the main switch to disconnect the power supply. Remove the plugs of electrical appliances such as TV sets, mixers, etc. from the sockets.

C. Elevators, air-conditioners, hair-dryers, etc. should not be used during this period. Avoid touching the refrigerator. There is a difference of opinion over using a mobile in such a situation; however, avoid using it as a matter of precaution.

D. The external water supply pipe should not be touched if it is made of iron.

E. Do not touch wet walls.

F. Sometimes rumours are spread everywhere during an emergency. So do not believe them. Information disseminated by the Government officially should be treated as true.

3. Precautions required while out of the house

B. If you are driving a 2-wheeler or a tractor or going by boat, go to a safe place immediately. If traveling in a 4-wheeler, stay in the vehicle itself.

C. 2-wheelers or 4-wheelers should be parked in a safe place away from trees and electric poles. Ensure that doors and windows of 4-wheelers are properly closed. Place heavy stone-breakers under their wheels, because the winds are likely to cause vehicles to drift away.

D. Do not stop under any tree as lightning is attracted to the trees. Since lightning strikes more at higher altitudes than the ground, it can be life-threatening.

E. Do not touch any electricity pole if it is wet everywhere due to rain. This is because moisture can also lead to an electric shock.

F. Avoid touching trees and bushes lying on the roads. It is possible that power lines might have fallen on these.

G. Since water is a conductor of electricity, keep away from sources of water.

H. People working in a field or in water should go to a dry and safe place immediately.

I. Electrical appliances, as well as metal objects should not be used as they are good electrical conductors. Avoid using umbrellas that have metal wires.

A. Do not leave the house until the weather becomes normal.

B. Do not touch trees in your area which might have been uprooted and power lines falling due to storms and rains. Report these to the Fire Department and Electricity Department.

C. In case of gas leakage from a cylinder in the house, turn off the main switch of the power supply. The cylinder should be placed in such a place (for example, in the balcony) so that it comes in contact with the wind. Do not switch on the electric supply if the house smells of gas.

D. If vehicles, electrical appliances as well as household items are new and insured and will be compensated for the damage caused by a natural calamity, guidance of an insurance agent should be sought.

Before disposing of the damaged items, they should be photographed first and their Panchnama be carried out.

Since only God can protect us
in the adverse times, perform spiritual practice ! 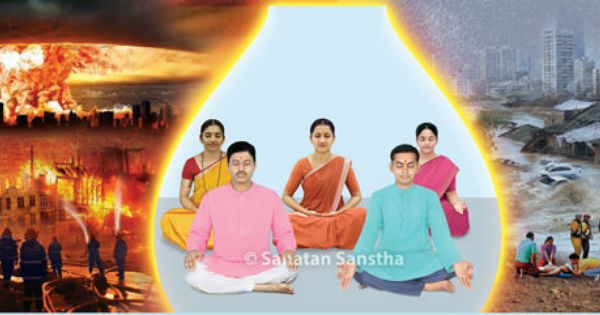 No matter how many measures we take at the physical level in view of natural calamities, we should always worship God to save ourselves. It is necessary to build self-confidence by performing spiritual practice every day to face such situations with courage. Therefore, start on your spiritual practice right away, not after the disaster strikes.

Hence, surrender to God and perform spiritual practice with devotion from now itself to be protected in the adverse times and become a devotee of God !

In case of natural disasters, help can be obtained by calling the National Disaster Management Authority’s helpline number 011-1078.

A similar situation may arise during the coming World War 3.

This information will be useful even at such a time. Therefore, keep this article handy.

Sanatan Sanstha provides guidance on how to survive during the adverse times !