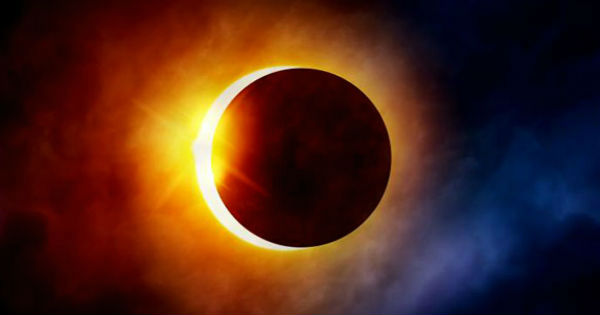 On Jyeshtha Amavasya (21.6.2020), Sunday, an annular solar eclipse will be visible in Rajasthan, Punjab, Haryana and part of Uttarakhand and partial solar eclipse in the rest of India around 10 a.m.

2. Period of visibility of solar eclipse in India

2 A. The phases observed during the eclipse (The timings are for Mumbai)

2 B. Commencement of Vedh of the eclipse

2 B 1. Meaning : Before the solar eclipse, the sun starts to come in the shadow of the moon. As a result, the sunlight starts reducing gradually. This is called the commencement of Vedh.

3. Rules for abiding during the solar eclipse

During Vedhakal bathing, puja, daily rituals/worship, chanting and Shraddha can be performed. Eating is prohibited; hence, refrain from eating; however, drinking water when essential, urination/defaecation, and sleeping are permissible. During Parvakal (10.01 a.m. to 13.28 p.m.) drinking water, urination/defaecation and sleeping are prohibited; hence, refrain from doing them in this period. The Vedhakal rules should be followed by children, weak and sick individuals, pregnant women from 4.45 a.m. on 21.6.2020 till Moksha of the eclipse.’ (Ref. : Date Almanac)

3 A. Importance of abiding by rules of Vedh from the viewpoint of health

3 A 1. Physical and gross level

During the period of Vedh, the food becomes stale very soon due to the growth of bacteria. Immunity becomes low during this period. Just as food cooked at night becomes stale next morning, the food cooked before eclipse turns stale after the eclipse. Therefore, that food should be disposed of. This rule does not apply to water and milk. These things can be used even after the eclipse.

Mental health is also affected during the period of Vedh. As per psychiatrists, some people suffer from mental distress such as depression, increased tension, etc.

The output of spiritual practice performed during eclipse increases by a thousand times. Therefore, it is essential to give priority to spiritual practice during the eclipse. If one is engaged in religious activities such as chanting, reciting stotras, meditation, a lot of benefits is accrued.

4. Prohibited and permitted deeds during the eclipse

3. Restarting purashcharan (Repeated chanting) of mantra which was interrupted for some reason in past, during this period will accrue output manyfold.

4.Taking bath at the end of the eclipse.

If an individual is facing impurity (Sutak, etc.), he remains pure in context with deeds connected with eclipse such as bath and donations during the period of the eclipse.

5. Fruit according to zodiac signs

The persons with inauspicious zodiac signs and pregnant women should not view this solar eclipse (Reference : Date almanac)

6. Precautions to be taken while viewing the solar eclipse

Do not watch the Sun through dark tinted glasses or a phone camera. This is unsafe and can lead to permanent vision loss. Do not use home-made filters or sunglasses as they are not effective. Avoid looking at the Sun through telescope, binoculars and any other optical device. There are special solar filters available in the market to witness the eclipse. Looking directly at the Sun can cause loss of the central vision, distorted vision, altered colour vision.

7. Information on taking bath during the eclipse

During the eclipse, all water is same as that of the river Ganga; still, cold water bestows more merits than hot water, flowing water instead of water which is drawn from well etc. is preferred. Taking bath in tank, river, Ganga, sea is more beneficial and bestows more merits. Taking bath especially in Narmada river is important. If it is not possible, remember Narmada during bath.

8. Importance of spiritual practice during a solar eclipse

A particular atmosphere during eclipse affects every animate being. The period of a solar eclipse is more complementary for performing spiritual practice than the lunar eclipse. From the astrological, religious and scientific perspective, the period of an eclipse is considered important. Since the period of an eclipse is sandhikal (Transition period), the effect of performing spiritual practice during this period is evident immediately. The importance of chanting and giving donations during an eclipse is manifold. Therefore, donate as per one’s might after the eclipse ends. The solar eclipse is the main period for starting the chanting of a new Namjap and perform purashcharan. If purashcharan which was performed earlier was started during an eclipse, the mantra becomes siddha (Effective). By chanting with full faith and concentration on remembering Shri Guru with bhav (Spiritual emotion), the distress at physical, psychological, spiritual and worldly levels are eliminated. Every effort becomes successful. Japmala (A string of prayer beads commonly used for spiritual practice) is not needed for chanting during an eclipse. The entire period from Sparsha (First contact) to Moksha (Final contact) of an eclipse is the most important.

Tarpan
Offering water to deceased ancestors
Shraddha
Ritual performed on the death anniversary according to Hindu Almanac, to appease departed ancestors? subtle bodies
Prahar
A time of a day (a day is divided into 3 hour segment called prahar)
Ganga
A Holy Bharatiya river emerging from the crown of Deity Shiva
Amavasya
New moon day
mantra
A syllable or words representing spiritual reality or an aspect of God uttered to protect oneself or to achieve a specific goal