The violent communist students – who dream of dividing India into pieces, who shed tears when our valiant Indian soldiers eliminate terrorists, and propagate urban naxalism – were attacked inside the Jawaharlal Nehru University (JNU). The students belonging to this same ideology had taken pride in vandalising the statue of Veer Savarkar, in the recent past. These students are often at the forefront of inflicting constant attacks on nationalism and Indian culture in the name of ‘upholding the constitution’. An attack on students inside a university is shocking; however, taking into consideration the conduct of this Jamaat-E-Azaadi brigade till now, the likelihood of nationalist citizens of the country feeling sorry about the incident, is minimal. The real question is – if these students who beat the drum of Communism that has the bloodshed of millions of innocent citizens at its core, have to face an incident like this – would it be termed as an action or a reaction? The police and state administration is well equipped to find out the guilty in the matter and punish them. However, the prime objection is to the nationwide chaos and frenzy created by Communist goons in the name of democracy ! 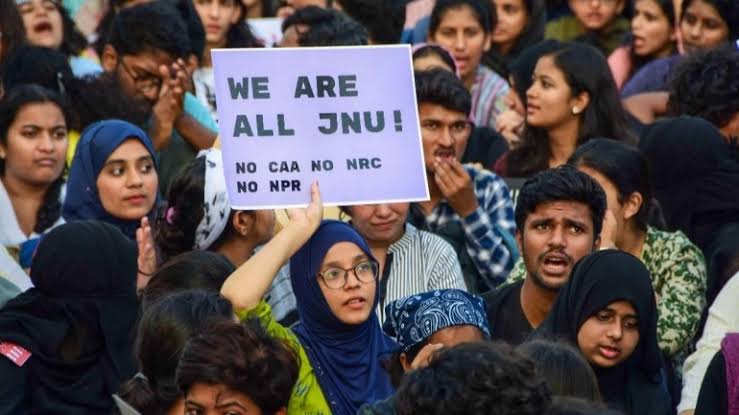 In the violence in JNU, volunteers of ABVP too were injured; however, the nationwide protests that the incident has triggered, are selectively targeting integrated devout Hindu forces. On the contrary, a couple of days prior to the incident, these same Communist students had destroyed the server room of the university and broken down the Optical Fibre Cable. This has disrupted the investigation of Delhi Police by making it difficult to obtain the CCTV footage of the incident that took place on 5th January. The blame of any inconvenience caused to the Communists is put on devout Hindus. Therefore the possibility of the goons from the Azaadi-brigade having destroyed the server room and then having targeted the students, cannot be denied. The Communists do anti-national activities and then call upon the politicians, self-proclaimed intellectuals and artistes who then cry foul about ‘democracy being stifled’ and protect them – this is the current ‘funda’! If the democracy-brigade was so sensitive, they should have carried out protests against the destruction of the server room by the Communists; but that didn’t happen.  Perhaps it is their (blind) faith that the actions of the Communists are ‘the strength of democracy’. Therefore, slogans such as ‘Bharat tere tukde honge’, ‘Afzal hum sharminda hai, tere kaatil zinda hai’, ‘Pakistan Zindabad’, are passed off as freedom of speech, and the nationalist chants of ‘Vande Mataram’ are seen as fascism !

The people of the country have begun to identify the hypocrisy of the communist, liberal, secular and intolerant brigade. This is why a complaint was registered when a poster of ‘Free Kashmir’ surfaced in Mumbai in the protest against JNU violence. A valid question was put forth – is the protest in favour of the students, or about freeing Kashmir from India? People are becoming aware and are able to clearly see the hypocrisy of the Communists and expose their real agenda. Such incidents are clearly displaying the thinking of people and in a way are causing polarisation. This shows who wants India to be divided into pieces, and who wants to see Kashmir integrate with India completely. Every person needs to decide if they want to be on the side of strengthening India, or on the side of its disintegration.

Shut the university down !

In the real sense, universities are supposed to be centers of knowledge; however, the Jawaharlal Nehru University has become a hotbed of anti-India, anti-national activities. It has become the central headquarters for all things anti-democratic and anti-Hindu. Despite this, it is quite puzzling to see why the government has not shut this university. In the recent past, the violent protest held in JNU against the marginal fee hike had attracted demands for the university to be shut down. The government should give it a thought, or at the very least, fulfill the expectations of the masses by completely destroying the seeds of anti-national ideology.