Mumbai – The Shriramnam Sankirtan Abhiyan was organised in Mumbai, Navi Mumbai and Palghar. 17 people participated in chanting performed at two venues in Dadar. At this chanting session a devout Hindu, Mrs. Sangita Bashirbad attending the Dharmashikshan class here sponsored 50 Namestrips of Shri Ganesh for Ganesh Chaturthi. Chanting was performed at 18 venues in Parel with 182 participants. 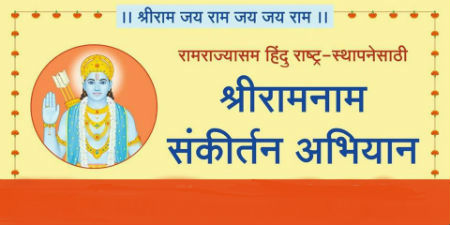 At Ghodpadev at the Kapreshwar and Siddheshwar temples rhythmic chanting was performed. Participants expressed how they experienced bliss from the chanting. The invaluable contribution of the Administrator of Siddeshwar temple Mrs. Rashmi Bhingarde is noteworthy. After chanting at the residence of Sanatan’s lady seeker Mrs. Vijaya Manjrekar participants asked questions and got their doubts clarified. After chanting in the office of Balaji Society women speaking Kannada appealed for a satsang.

Participants get spiritual experiences during chanting

At Worli chanting was done at 3 venues by 44 people. An aged lady claimed that usually she is unable to sit in one posture for long but along with other participants at the residence of Sanatan Prabhat reader Mrs. Manisha Kadam she was able to chant the Name of Shrirama for 15 minutes. One of the participating women requested that this chanting be conducted at her residence too. When chanting at the residence of Mrs. Reshma Devrukhkar in BDD Chawl many experienced a fragrance.

At the Umela Bawan Dev temple at Mira road after the chanting according to participants Divine consciousness (Chaitanya) was perceived in the temple. In Dahanu (East) the Bhajani Mandal women promised to do weekly chanting after Shravan was completed. One woman participant expressed how she was feeling light after the chanting.

Overwhelming response to chanting of Rama in Western Mumbai

77 people participated in chanting held at 5 venues in Western Mumbai. In the Shiva temple in Dahisar’s Ashokvan as the participants liked the chanting they assured to chant for 10 minutes daily. Owner of the Girnar Datta temple said that Ramnam chanting campaign should be continued for as long as possible. After chanting was held in Puja Padhye’s Yoga class in Borivali’s Vazhira region the participants claimed that it is because of the chanting that they were able to experience bliss.

Guidance to students too

How was Valya transformed to Valmiki, why to call out to parents in the mother tongue instead of Mummy Papa, what is the significance of group chanting etc was explained by lady seeker Mrs. Sulabha Sonawane to students attending her tuition classes. Student listened to this guidance attentively.

Overwhelming response to
campaigns in Navi Mumbai and Central Mumbai

Chanting was performed at 7 venues in Navi Mumbai with 106 participants. At the Devadiga Bhavan in Nerul 50 people performed chanting. Thereafter it was planned to have a group chanting session at the residence of Mrs. Ragini Saliyan besides this venue on the second Saturday of every month. Kalpana Gole who had come to chant in the Varadvinayak temple at Koparkhairane Sector 4, promised to bring 10 more people for chanting in the next session.

At chanting performed at 28 venues in Central Mumbai in all 311 people participated. Two lady devotees of Kalawati Aai from Bhandup village when chanting at the residence of Mrs. Matkar spontaneously applauded this campaign after seeing the picture and banner of Shrirama. As the chanting was performed with guidance it occurred in one rhythm and gave immense bliss according to women who had come for chanting in Nahur. Women who had come for chanting to the residence of a devout Hindu lady at Mulund, Mrs. Shakuntala Karad asked how to perform mental ritualistic worship of Shri Ganesh.

As some were feeling that a Dharmashikshan class should be commenced they openly discussed it. During chanting in the Shrirama temple at Gandhinagar in Mulund East 5 year Master Kushal Hegde who had come to the temple was chanting loudly but with concentration.

During group chanting in Naigaon there was participation of a 26 year old youth. After the chanting he gave the feedback that he was in terrible stress since the past two days and was getting suicidal thoughts which had vanished after the chanting, that the negative thoughts in the mind had gone and it had become steady and calm. He was unable to describe the satisfaction that he experienced from within from the chanting. After hearing the chanting recorded in the voice of Sadguru (Mrs.) Anjali Gadgil he commented that never before had he heard such a melodious voice.

Another individual attending the chanting stated that he had been reciting the Ramraksha stotra and Hanuman stotra regularly for several years but till date had not been able to close his eyes with spiritual emotion. However his eyes had closed spontaneously after hearing this recorded chant and chanting had occurred spontaneously with spiritual emotion.

Stotra
Holy hymn; These hymns praise aspects of the divine, such as Devi, Shiva, or Srivishnu
Satsang
Company of the God Principle
Mandal
Protective sheath