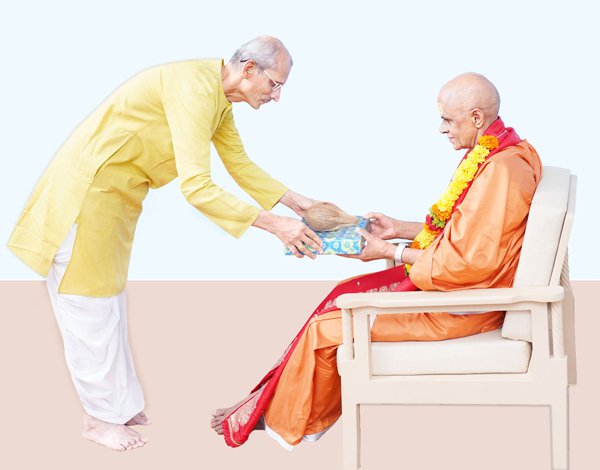 Sanatan ashram, Ramnathi (Goa) – Paratapar Guru (Dr.) Athavale is the inspiration for what I taught Sanatan Sanstha’s seekers residing in Ramnathi ashram and for what I learnt here. The Sanatan ashram is simply an ocean of Divine Consciousness. The Personality Defect Removal and Ego Removal processes being carried out here are indeed unique. Seekers should remember that mere efforts made by them in this direction are fruitful because of His resolve. Paratpar Guru (Dr.) Athavale does not need to visit any place of pilgrimage because the place where He resides is itself a place of pilgrimage. Dr. Athavale is Omniscient hence through the medium of Maharshi Adhyatma Vishwavidylay He has taken up the mission of spreading knowledge on Bharatiya culture, traditions, 14 vidyas abd 64 arts.This mission will most certainly be accomplished is what Jagadguru Yogarushi (Dr.) Swami Satyaprakash, founder of VISHWA organisation expressed with spiritual emotion. 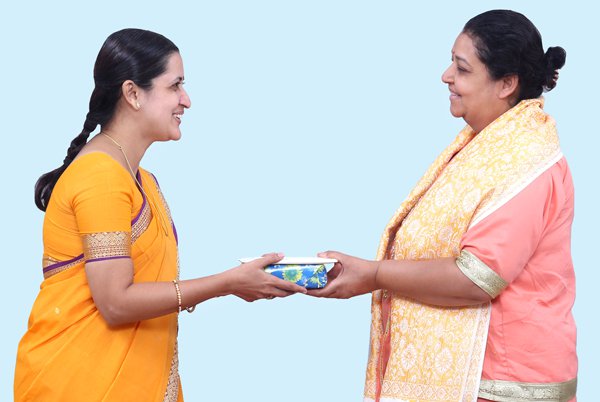 Miss Tejal Patrikar Music section Co-ordinator for Maharshi Adhytma Vishwavidyalay felicitated Dr. Preeti Mishra, his disciple. On August 16, 2019 Jagadguru Yogarushi (Dr.) Swami Satyaprakash and his disciple Dr. Preeti Mishra visited the Sanatan ashram. On August 19, 2019 Sanatan Saint H.H. (Dr.) Mukul Gadgil felicitated him by applying a tilak with kunku (vermilion) on the forehead, offering a floral garland, a coconut and a gift and then offered obeisance at His Holy feet.

In his guidance Jagadguru Yogrushi (Dr.) Swami Satyaprakash said further, ‘It is because of Paratpar Guru (Dr.) Athavale that everything is happening. He is the inspiration of all. I am his student. I will learn from Him. I will also send our seekers here for learning. When guiding in music Jagadguru Yogarushi (Dr.) Swami Satyaprakash gave information on some uncommon ragas and also sang them. He also stated that on the next visit he would create a new raga called ‘Jayant’ in a new rhythm which he would name ‘Athavale’.

Statements with regard to Jagadguru Yogarushi
(Dr.) Swami Satyaprakash made by Paratpar Guru (Dr.) Athavale

1. Jagadguru Yogarushi (Dr.) Swami Satyaprakash is a form of God and we are receiving a chance to learn from him. We would require 10 years to acquire the knowledge that he has imparted to us in 2 to 3 days, on our own.

2. The Guru-disciple relationship between Jagadguru Yogarushi (Dr.) Swami Satyaprakash and his disciple Dr. Preeti Mishra is indeed beautiful. All get good spiritual experiences in the Holy company of Swamiji.

The ashram is really good, there is not only knowledge here but seekers are made to perform actions. It is difficult to reveal your personality defects and ego in society but in the ashram seekers are openly writing them on the blackboard. What is unique is that personality defects and ego manifestations are tackled directly in the Sanatan. Paratpar Guru (Dr.) Athavale who is getting this done is indeed great. We need to teach seekers from our ashram this process. Here there is a yearning to learn music, each one is optimistic.

Founder of the VISHWA organisation from Canada Jagadguru (Dr.) Swami Satyaprakash has been guiding seekers from Sanatan’s Ramnathi ashram on different topics for the past few days. Given further are some of his virtues perceived at the subtle level.

I perceived Swamiji as a dnyanyogi. The effect of his speech occurs on the intellect and clarifies doubts. I could perceive vibrations emitted by his guidance moving around my head.

Swamiji performs spiritual practice with yearning like yogis. As his individual spiritual practice is as per yoga he guide seekers by remaining seated in a particular posture for hours together. At that time subtly his mind too is engrossed in the subject and the body is motionless.

When an embodied soul wins over the Absolute Earth Principle he is able to remember several points but this requires rigorous spiritual practice. Swamiji’s memory is like that. When speaking on various topics he uses Sanskrut verses and then explains their meaning. Even at the age of 70 years he does not require points on a piece of paper when speaking, this proves what sharp memory he has.

Swamiji had been performing individual spiritual practice by behaving as per wish of the other till date. Now God is taking him towards performing samashti spiritual practice as per the wish of God. Due to this action performed by God in the subtle he has started visiting the Sanatan ashram to guide seekers. This explains his journey from vyashti to samashti.

A.Guidance from Swamiji has a long-lasting effect, even on seekers affected by negative energies the impact occurs quite easily.

B. When guiding sometimes Swamiji remains in an active state of meditation.

It is with the grace of God that understanding some virtues of Swamiji I am typing them out and for that I offer gratitude unto Bhagwan Shrikrushna and Paratpar Guru (Dr.) Athavale

On 19.8.2019 at a programme organised by Maharshi Adhyatma Vishwavidyalay at Ramnathi ashram founder of VISHWA an organisation based in Canada, Jagadguru Yogarushi (Dr.) Swami Satyapraksh conducted a number of experiments on music on seekers both afflicted with spiritual distress and those without it. Swamiji sang devotional songs (bhavgeete) associated with the seven chakras (spiritual centres) and notes associated with them along with the root (bija) mantra and different ragas. Given further is that subtle-analysis and different spiritual virtues perceived in Swamiji.

1. As Swamiji speaks knowledge emanates from him and when he sings devotion is emitted by him. In fact (Dr.) Swamiji is an excellent blend of knowledge and devotion.

2. As Swamiji sings one is able to think of Deity Saraswati easily and it appears as if the Deity itself is singing through him.

3. Spiritual melody is always perceived in Swamiji’s songs. When I wondered why this melody existed I received an answer in the subtle that generally the Ida channel (nadi) or the Pingala channel (nadi) is active. But in Swamiji the Sushmna nadi is active all the time. That is why his voice is enriched with Divine melody.

4. Swamiji is inspired by Hindi and Sanskrut poetry and he composes it as songs. Swamiji’s spiritual intellect being unique, is active, so these actions are performed by him easily.

6. Swamiji recited the Shivatandav stotra a few times. At that time in the subtle negative energies tried to meditate on Deity Shiva but due to the devotion of Swamiji no sooner did the subtle-sorcerers (mantriks) start meditating than the meditation would get disrupted.

7. There are 22 shrutis in 7 notes. When Swamiji was singing in the subtle I saw some shrutis in feminine form, dancing. The women were young, dressed in white, adorning gold ornaments and a gold crown. They were dancing rhythmically to his music. This itself is an indicator that these shrutis were appeased.

9. Swamiji repeated a bijamantra associated with every kundalini chakra (spiritual energy centre) 7 to 8 times. After that it had an effect on the kundalini chakra which was in spiritual distress and perceived that black energy from there being expelled.

Kundalini
Dormant spiritual energy in the subtle-body. It is coiled like a serpent and consists of one central channel and two channels on its sides
Stotra
Holy hymn; These hymns praise aspects of the divine, such as Devi, Shiva, or Srivishnu
Ashram
A place where a seeker can remain engrossed in spiritual practice through spiritual discipline
mantra
A syllable or words representing spiritual reality or an aspect of God uttered to protect oneself or to achieve a specific goal