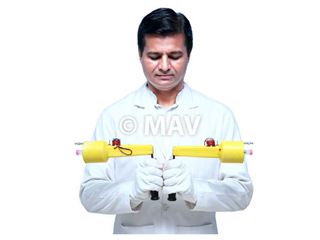 Dr. Mannem Murthy, the inventor of UTS, has changed the name of UTS to UAS (Universal Aura Scanner) on his website. Hence, the readers may please note that UTS will hereafter be known as UAS in the research papers of Maharshi Adhyatma Vishwavidyalay.

1. Measuring the aura with ‘UAS’

1A. The purpose of studying the spiritual uniqueness of the samples in the experiment using scientific instruments or technology

To understand the extent of positive vibrations in an object (an object, a premises, an animal and an individual) and to find out whether the object is sattvik or not and whether it is beneficial spiritually, it is necessary to have subtle perception ability. Saints of a high spiritual level have this ability and hence, can correctly identify the subtle vibrations in every object. Devotees and seekers have faith in every word of a Saint; they consider it to be final testimony. However, ‘rationalists’ do not have faith in words, they ask for proof. Only when an aspect is proved through scientific analysis, meaning, proved using an instrument, they believe in it.

1B. Introduction to ‘UAS’

This instrument is also known as an ‘aura scanner’. By using this instrument, the energy and the aura of an object (an object, a premises, an animal and an individual) can be measured. This was developed in 2005 by Dr. Mannem Murthy, a former nuclear scientist of Bhagyanagar, Telangana. He says that the ‘UAS’ can be used for identifying obstacles in a premises, medical science, animal husbandry, Vedic science etc.
(For more information on ‘UAS’ please visit : www.vedicauraenergy.com/universal-scanner/)

1C. Various components of the scientific experiment conducted with the instrument and description

1C1. Negative energy : This energy is harmful. It is basically of the following two types.

A. Infrared : Under this, ‘infrared’ energy emitted by an object is measured by placing a ‘-IR’ sample in the scanner.

B. Ultraviolet : Under this, the ‘ultraviolet’ energy emitted by an object is measured by placing a ‘-UV’ sample in the scanner.

1C2. Positive energy : This energy is beneficial. To measure it, a sample of ‘+ve’ energy is placed in the scanner.

Similarly, auras of ultraviolet energy, positive energy and specific vibrations in the object are measured.

2. Precautions taken for consistency in the readings

B. The individual handling the instrument wore white clothes so that their colour does not affect the experiment.