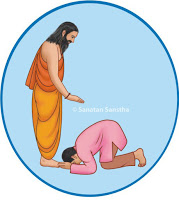 Business houses and organisations present their annual financial as well as business reports. Likewise, this is the annual report of the spiritual activities of Sanatan Sanstha as well as organizations such as Hindu Janajagruti Samiti (HJS) and Spiritual Science Research Foundation (SSRF), whose seekers are treading the Path of spiritual practice under the guidance of Sanatan Sanstha. This unique report is indicative of the spiritual progress made by seekers and individuals, and is being published so that other seekers and individuals too get inspiration and make rapid spiritual progress.

The ultimate truth for those treading the Path of Spirituality is – ‘Gurukrupa hi kevalam, Shishya Param-mangalam !’ – the ultimate well-being, meaning, attaining Moksha (Final Liberation) by a disciple is possible only due to the Guru’s grace.

They are fortunate to receive guidance from Paratpar Guru (Dr.) Jayant Athavale and get to know the spiritual progress they have made in the preceding year. As a result, they have a feeling of gratitude unto the Guru and wait eagerly for this day.

Another noteworthy fact observed is that within this year 200 seekers have reached the spiritual level of 61% and thus, have been liberated from the cycles of birth and death.

Like last year, this year too, seekers have realised that devotees from some other sects, some professionals and businessmen who have yearning for seva, Hindus who are participating in the mission with earnestness and some Hindu Advocates have progressed spiritually and attained 61% spiritual level. Sanatan Sanstha has declared their spiritual levels and felicitated them. Their names are also included in the list. This proves that there are people in the society who have progressed spiritually.

A special feature of Sanatan’s guidance is that the spiritually curious people are not only recommended vyashti sadhana (Individual spiritual practice) but samashti sadhana (Spiritual practice for spread of Spirituality) too, thus giving suitable thought to the upliftment of the Nation and Dharma. Due to such a pervasive thought and the sacrifice of body-mind-wealth by the seekers to attain the noble goal of establish-ing the ‘Hindu Nation’, they get God’s grace abundantly by the Guru’s grace. This is the real reason for the rapid spiritual progress of seekers.

The individual at this level only thinks of his own happiness and hardships. He has nothing to do with the society and he thinks that he alone is doing everything on his own.

When his spiritual level rises to 30%, he starts believing in the existence of God to some extent and he starts performing sadhana (Spiritual practice) and seva (Serving the Absolute Truth).

When his attraction towards Maya (Great Illusion) and God-realisation becomes equal, his spiritual level becomes 50%.

When his spiritual level reaches 60%, he starts getting detached from Maya. Then, the dissolution of his mind begins and he is able to absorb the thoughts from the universal mind. He gets liberated from the cycles of birth and death after death, and acquires a place in Maharlok.

1. Seekers who have reached the spiritual level of 60% or more

Given in the tables is a list of seekers who are in Prasar and other sevas in different Districts, sevas in Sanatan’s Ashrams, Seva-kendras and those who are staying at home and progressing spiritually. We have presented a partial list – which pertains to areas where English Sanatan Prabhat has the largest circulation. For complete list, please visit :
www.sanatan.org/mr/spiritual-progress-of-seekers

Note : The table ahead has names of seekers and others whose spiritual level was declared on 17th July 2016. (Names of child-seekers and their spiritual levels have already been published in English Fortnightly Sanatan Prabhat Issue of 16-31 July 2016.)
* (Single asterisk) These seekers could not progress or have regressed due to the attacks by negative energies and sickness
** (Double asterisk) These seekers progressed despite having severe negative energies distress
Please go to Point 1A. in the table

seva
Service unto the Absolute Truth, that is, God Principle
Samashti sadhana
Spiritual practice for the spread of Spirituality
Gurukrupayoga
Path of Guru's grace, which incorporates eight steps
Dharma
Righteousness