Number 1 – Notice what you feel on pronouncing the English letter ‘A’ for 2 minutes.

Number 2 – Notice what you feel on pronouncing Sanskrut letter ‘Om’ for 2 minutes.

A. Result of the experiment

Experiment 1 : While pronouncing the English letter ‘A’ for 2 minutes, you feel heaviness.

Experiment 2 : While pronouncing the Sanskrut letter ‘Om’ for 2 minutes, you will first feel peaceful and then perceive Anand (Bliss). A sort of chetana (Sentience) will be created in the body.

If we compare ‘Om’ in this way with a letter in any language of the world, we will be able to experience the same.

A. It is not that the Anand or Shanti (Peace)
are perceived only while pronouncing ‘Om’, but the
feeling continues when you pronounce 3-4 words after ‘Om’.

B. Divinity of ‘Om’ helps in achieving completeness !

Many Sages & Ascetics imbibed nirgun (Non-materialised) and nirakar (Formless) Divine sound from Brahmanda (Universe) through meditation and presented it in the form of sagun (Materialised) and sakar (With form). Akshar-brahman (Brahman Principle in the alphabets) was created from ‘Omkar’ and Sanskrut language was created through it. Omkar is the perfect being – Omnipotent and Divine form. Similarly, it bestows completeness. Omkar is the spiritual experience of perfection as bestowed by God.

C. NASA (in USA) also realised the importance of Omkar 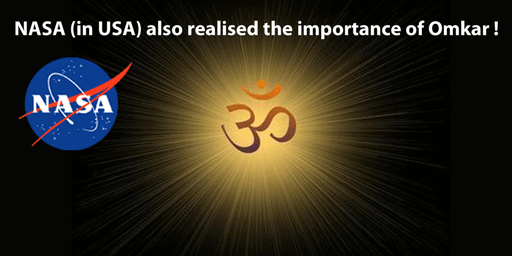 The research on Omkar was conducted at many places in our country and overseas. Recently, ‘NASA’ has also conducted research on Omkar. Many researchers and scientists have reported that the Divine sound of Omkar has positive effect on the human body, mind, intellect and subconscious.

The BJP Government has taken a shocking decision to delete the pronunciation of ‘Om’, which is essential in various exercises of Yoga and make Yoga ‘secular’. Mr. Shripad Naik, Union Minister for Ayush, has clarified that performing Suryanamaskar (Posture in Yoga in obeisance to the Sun Deity) and pronouncing ‘Om’ on ‘International Yoga Day’ is not compulsory. He also said, “Though Yoga is incomplete without the pronunciation of ‘Om’, its pronunciation is not compulsory. We hope that the people will understand this”.

Deleting ‘Om’ from Yoga postures is like sucking the soul out of the body. Other religious communities do not tolerate interference in their religious matters from anyone including the rulers. The Government does not dare to drop the word ‘Kafir’ from the books of the minorities. (This word is the cause of terrorism all over the world.) In the same manner, no one has any right to interfere in the science of Yoga that is associated with Hindu Dharma. In such a situation, how can the decision to delete ‘Om’ from Yoga under the pretext of opposition from some Muslims and Christians and expect Hindus to understand this be justified ? Not a single Christian and Muslim country has expressed opposition to Yoga. On the contrary, they understand the importance of Yoga very well. However, well aware of the vulnerability of Bharatiya rulers, Muslims and Christians in Bharat are opposing Yoga. The Modi Government is appeasing the minorities instead of taking religious fanatics to task. This proves that the Modi Government does not hesitate at all to trample on the religious sentiments of Hindus for the sake of appeasing religious fanatics.

4. Do not forget that ‘Om’ has
an importance in other religions as well !

According to our Scriptures, ‘Om’ is a Beejmantra (First letter of all mantras) and the source of creation of the Universe. It has special importance in other religions (such as Buddhists, Jains, Sikhs etc.) too.

The present Government that deletes ‘Om’ from Yoga does not agree with the importance of ‘Om’ that is accorded by ancient Sages and Ascetics to it. If the Government does not want to trust our Sages and Ascetics, it should conduct the aforementioned experiments on ‘Om’ and realise its importance. Of course, even if the rulers are convinced about the importance of ‘Om’ by conducting the experiment, they will not accept the reality for the fear of hurting the minorities.

The present rulers are feigning to be blinded by darkness in broad daylight ! – Paratpar Guru (Dr.) Athavale